As the medium of comics earns a greater place in the American reading imagination, it’s worth recognizing the plethora of remarkable creators who have shaped its contemporary contours. Superstar writers like Neil Gaiman, Harvey Pekar, and Warren Ellis have pushed the boundaries of storytelling, as have artists such as Neal Adams, Frank Quitely, and Alex Ross, to name just a few. And then, god bless ‘em, there are the auteurs who manage to excel at both words and pictures: in the underground a golden road stretches from R. Crumb to Chris Ware; groundbreaking work has been done overseas by people as disparate as Osama Tezuka and Marjane Satrapi; and the mainstream has made a place for mavericks such as Frank Miller and Rick Veitch. Although that last name may not be as familiar to many readers as some of the previous ones, it signals an accomplished and diverse body of work well worth investigating. 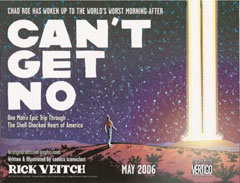 Veitch’s latest graphic novel, in fact, is one of his most challenging, because unlike most comics—indeed, contradicting what many hold to be the very essence of comics—the words and the pictures of Can’t Get No have only the most tenuous of relationships. The image sequence, a tour de force of graphic storytelling recalling the wordless, socially engaged woodcut novels of Lynd Ward and Frans Masereel, presents a dark portrait of man’s fate. Veitch’s hapless hero, Chad Roe (a name rife with connotations), is an executive at “Eter-No-Mark,” a permanent marker company that goes belly up when a graffiti-stricken New York City retaliates with a lawsuit. Chad’s luck goes from bad to worse when two underground cartoonists—they’re working on a comic called “The Adventures of Mi$ter Moneybag$”—draw all over his body with his own indelible product after he’s drowned his sorrows in booze. And from there, things really get weird, not the least because at this point two planes hit the World Trade Center, a sight our tattooed protagonist witnesses from the Jersey side of the Hudson River.

As strange as it gets, however, the narrative remains clear. Veitch excels at presenting information without dialogue or exposition; we learn necessary background from ads, billboards, signs, posters, newspaper clippings, etc., and his palette of facial expressions and gestures is large and varied, communicating worlds. But here’s the kicker: Veitch has placed captions over the picture narrative that offer a measured essay on contemporary life—a poetic, occasionally abstruse, and above all relentless dissection of the world Chad Roe inhabits. “Professional mourners line the shores. Snake charmers plant kisses on the crowning heads of cobras. And dowsers divine hot springs just beneath our feet,” is as emblematic a passage as any. The only time the diatribe is interrupted is when the towers fall on September 11; for this sequence, a similarly toned passage from Renaissance artist Albrecht Durer (whose dark, symbolic engravings feel like a precursor to this work) takes over.

Veitch’s layering of an existential treatise over a rather zany visual narrative is a calculated risk, and is likely to earn the book as many detractors as fans. The text and imagery are parallel more than complimentary discourses, and the reader’s inevitable struggle to make them fit together isn’t always pleasurable or rewarding; on top of that, Veitch’s monologue can wear dangerously thin, and the post-9/11 action of Chad Roe’s journey feels purposely bizarre at times (a scene set in a presidential theme park, in which Chad romps with a Jackie O. impersonator inside John F. Kennedy’s head, comes to mind). But the large ambition of Can’t Get No outweighs its small failures, as the book pushes the boundaries of the word-image art form, and while doing so takes up some profound questions: “What does it mean to be alive?… Why are we suspended in this vacuum / Of empty comfort and false contentment /Denied authentic grace / Or any real experience / of satisfaction?” The whole book has the feel of a fevered hallucination, drawn by a tortured soul who can’t get the classic Rolling Stones song which gives the book its title—itself a stellar evisceration of America’s consumer culture—out of his head.

The chorus from “(I Can’t Get No) Satisfaction” actually appears in a panel from Veitch’s Crypto-Zoo, his third volume of “The Collected Rare Bit Fiends”—comics that relate his own rather developed and intense dreamscape (the series title pays homage to pioneering cartoonist Winsor McCay’s “Dreams of the Rare Bit Fiend”). Here, generally using a simple, six-panel grid, Veitch marries the clarity of graphic storytelling to the nonlinear, heavily iconic narratives of the oneiric mindset—a winning combination, since the grammar of comics is uniquely suited to the recounting of dreams. It’s a better medium than just words, just images, or even the word-image art form of film, because comics allows for the simultaneous presentation of dialogue, thought, and exposition.

For example, in dreams we often know who someone “really is” despite appearances; here the cast of crazy characters can be efficiently labeled with a pointer arrow (Veitch often seems to interact with “Playmate of the Year”). Likewise, we often inexplicably realize what another person in our dream is thinking or intending, and comics similarly convey such third-person information unobtrusively yet energetically. And of course the controlled flattening of visual imagery in comics lets the “special effects” the unconscious can conjure feel as real as the more realistic elements they counterpoint—which as any dreamer knows is essential to the coherence of the dream and the subsequent memory or telling of it. Finally, the fact that certain people and places (e.g. “Childhood Home”), as well as events and themes, recur in one’s ongoing oneiric record lends a dream diary an eerie narrative stability amidst the symbolism-strewn strangeness, one that a consistently drawn set of comics can enhance. 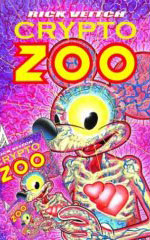 Veitch deploys all these strengths in Crypto Zoo, and the result is an unusual and intriguing graphic novel. This partly, of course, derives from his particular skills and inclinations as an artist—without question the surrealistic impulses and penchant for nonlinear narrative we’ve found in Can’t Get No find a natural home in dream telling—but the comics here are also well informed by Veitch’s reading in archetypal psychology, which seems to have offered an enabling theoretical background for his thinking about the framework of relating dreams; in the book’s introduction he talks, for example, about deciding how to render the “sacred landscape” in which his dreaming self seems to exist. Whatever the cause, the effect is an art full of sharp and interesting edges—perhaps more fascinating for its formal delight than for the personal mythology it excavates, but fascinating nonetheless. More comics practitioners would do well to experiment with converting their dream diaries into full-blown comics.

If the above examples make it sound like Veitch is strictly a psychedelic wanderer or constraint-based formalist, it’s worth pointing out that he works quite often in mainstream comics, whether directly (he’s provided art and/or scripts for existing corporate-owned characters from Aquaman to Swamp Thing) or in spirit, as is the case with a substantial portion of his independent output. Veitch has penned three full-length graphic novels—The One, Bratpack, and The Maximortal—that attempt to deconstruct the superhero archetype. This output, though perhaps not as well known as key books by Frank Miller, Grant Morrison, and Alan Moore, is nevertheless contoured with penetrating ideas about the superhero, and deserves to be regarded in the same study.

Take The Maximortal, which like Crypto Zoo is published by Veitch’s own King Hell Press. A Nietzschean fable about the dark societal impetus of the Superman (here named “True-Man”), the book deftly weaves together the splitting of the atom, the early history of superhero comics, and a vision of what would have happened if a super-powered being actually appeared on this earth. In the second of those threads, it plumbs territory similar to Michael Chabon’s The Amazing Adventures of Kavalier and Clay (though it was published, in serial form, first), exploring the creation of a fantastic hero by Jewish teenagers and how the corporation that made millions off the property took them to the cleaners. Yet it’s the final narrative thread that is most vicious: rather than beginning life as a human with the kindly old Kents, this super baby from a strange land unleashes a violence that becomes harnessed by the military; whether or not that’s the best choice in an impossible situation is part of Veitch’s probing, glaring look at our country’s most innate values.

Unlike Can’t Get No and Crypto Zoo, The Maximortal showcases Veitch’s ability to pastiche recognizable tropes, just as his Greyshirt: Indigo Sunset engages pulp literature or Swamp Thing transforms horror conventions (which are not entirely absent from The Maximortal: at one point the super baby goes on a spree decapitating the townspeople and throws their heads in a silo, saying “I’m workin’. Doin’ my farmin’.”). Veitch’s writing and art may not have the formal elegance and postmodern savvy of his sometime collaborator Alan Moore’s, but his rougher, edgier style generally serves his story—this is an urgent warning communicated in thick yet kinetic strokes, as if by the love child of R. Crumb and Jack Kirby. Veitch’s pacing of the complex story is masterful (with one caveat: I would have liked the occasional pause of chapter breaks, conventionally offered through blank pages or the issues’ original covers, rather than having the story rush headlong from one scene to the next), and his panel composition is nicely conceived, engaging and variable without being flashy or overwrought. There are plenty of grace notes in the language, too: one interlude imagines Sherlock Holmes playing a role in the proceedings, and is pitch-perfectly narrated by Watson; another, about the actor who played True-Man on the silver screen, is told from the point of view of fellow actor David Niven.

Whether one reads The Maximortal, Crypto Zoo, Can’t Get No, or any of Rick Veitch’s other noteworthy works, one hears and sees the hallmarks of his style on every page, the personal stake he has placed in setting pen to paper. If some of his books seem extreme, cynical, or difficult, well, they are. But they are also shaded by a fervent belief that the medium of comics can and should grapple with such states. In the end, this creator seems to have eschewed a single voice in favor of chasing down as many ideas as possible through his comics—and in this, his comics smartly reflect more about the absurd complexities of life than most.

Click here to purchase Maximortal at your local independent bookstore