THE MAN WHO TURNED INTO HIMSELF
David Ambrose
Picador ($13)

Books don’t have an expiration date. They may go out of print and become hard to find, forcing readers to comb their local used bookstore or search the internet for a discarded copy, but really good books stay that way. Too often publishers are caught up in the next, new thing—always looking to the next season, the brand new book that will possibly be a bestseller. And the bookstores push old titles off the shelves faster than you can say “new Stephen King novel.” Time is the killer of these books: that’s why it’s refreshing to see publishers recognize a good book and give it a deserved second life. Picador has begun a new series of re-discovered books entitled “The Best Book You’ve Never Read” with their first deserving title, The Man Who Turned Into Himself by David Ambrose. And Atheneum Books for Young Readers has reprinted a wonderful young adult novel by Christina Askounis entitled The Dream of the Stone. Both books were originally published in 1993, and now fifteen years later, both books can enjoy a second chance at a new audience. 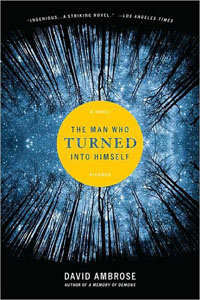 Coincidentally, in each book, the protagonists travel to other worlds to discover their true selves. In The Man Who Turned Into Himself, Richard Hamilton, or Rick to his friends, enjoyed a perfect life with his wife Anne and his child, four-year-old Charlie. He looked forward to an important meeting at the bank where they were expected to approve a loan to expand his thriving business as a publisher of magazines and newsletters catering to specialty fields. “I sometimes felt that we were luckier, and happier, than we had any right to expect,” mused Rick. But there are forces at work to disrupt this happiness, little rips in the perfect picture that trip him up. First, he falls off the roof of his house in pursuit of a recalcitrant cat. Luckily he survives the plummet with only a few bruises. Then on the way to his meeting, he nearly collides head on with a semi truck. He averts that tragedy, but he suspects some force in the cosmos was trying to communicate with him. “To miss death twice in one morning was too close for me. I had this jolt of superstition about things coming in threes.”

In the bank meeting, Rick’s preoccupied doodling reveals a horrible premonition of his wife’s death, and without explanation, he catapults out of the building to find her, but it is too late—Rick arrives at the horrific scene of the automobile accident just in time to say goodbye to his dying wife. The intense agony and denial of the moment triggers a critical mental shift, one that changes his life, or shall we say “lives,” irrevocably. “I roared into the blackness of my inner universe: a roar of terrifying, primal, primitive defiance.” Then unbelieveably, Rick heard his wife’s voice and realized all was not lost. He had his wife back, and so began looking around for Charlie, only to be answered with “Who?”

Ambrose uses the quantum physics theory of Multiple Worlds to create a spell-binding and compulsively readable (and re-readable) novel. His story not only reveals a possible scenario for traveling through these parallel realities, but also takes into account the subjective nature of quantum physics, in which the observer is a necessary component in the outcome of experiments. When Rick awakens from his blackout, he slowly realizes he’s not in the same life he left. Here he is known as Richard, a real estate broker, and his once muscular physique is now flabby. Anne is there and so is his best friend and lawyer Harold, but the differences stand starkly in relief to his old life. Although information about this world leaks through his bewilderment, his odd behavior sends him temporarily to the psyche ward, where in order not to be committed for life, Rick acquiesces to Richard and plays along—for a while.

But I’m still here.
Rick.
Yes, RICK!
Widower of Anne, father of Charlie. Poor little Charlie, where is he? I should be with him, instead of trapped inside the mind (if that’s the word) of this spineless, dumb, near-doppelganger of myself who’s making love to the equally near-doppelganger of my dead wife. . .
. . . there isn’t room for the two of us in this world.

While Rick gets pushed deep into the subconscious of Richard, he slowly begins to make contact with his parallel world counterpart, establishing communications and unwittingly leading Richard toward a disastrous life or death decision.

Ambrose’s internal thriller spills out into consequences for the other characters who haven’t a clue about the struggle going on within one man’s mind. And as the reader makes his or her way through the story, it becomes apparent that this narrative is a document presented to the blind psychiatrist Emma J. Todd (who also has a younger counterpart in Rick’s world). We are presented with letters and transcripts to further document the strange but—to Emma—open-and-shut case of dissociative identity disorder. Her diagnosis, however, is called into question with a final bit of harrowing proof that Rick’s story may not have been all in his mind. Just as there have been many studies and evidence of remote viewing, astral projection, and other psychic phenomena, it may be that the mind is the key to time travel and travel between worlds. We do it whenever we crack open a book.

And please do crack open Christina Askounis’s The Dream of the Stone, a story that also involves travel between worlds, but these are two very different planets—one of them in danger of immediate destruction. Only Sarah Lucas can help this planet, but she has her own problems. Her parents were killed in a plane crash, and her genius brother Sam is wrapped up in his work on a top-secret project for his mysterious employer, the Cultural Institute for the Propagation of Humanistic and Exploratory Research (CIPHER). But when he comes home for the funeral, they discover some strange equations written on the wall of their treehouse, equations that help Sam to complete his project. Sarah promises to keep it a secret if Sam will explain what’s going on:

He hesitated, studying her for what seemed like minutes. “Have I ever told you about wormholes?” he asked at last.
“As in earthworms?”
He shook his head. “As in quantum foam. The entire universe is permeated by a sea of wormholes—incredibly tiny tunnels, ten to the minus thirtieth centimeter—that lead from one part of the space-time continuum to another.”

He goes on to describe the difficulty in finding a wormhole in space, then enlarging and stabilizing it enough to travel through. With the help of the hastily scrawled equations, his project—a force field he calls The Looking Glass—may be able to do this. After Sam returns to CIPHER to pursue his work, Sarah must leave her idyllic home to stay with her despised Aunt and Uncle who live in New York City, where she begins to have weird dreams and to feel like she’s being followed. Especially after Sam sends her a strange gift, a paperweight that was “a pure dark blue, the ethereal blue of a winter twilight deepening into night. Hidden in its depth, among veils of clouds, glimmered a universe of tiny silver stars. The Stone.” The Stone proves to be an irresistible draw for the nefarious Zvalus, the head of CIPHER, who attempts to kidnap Sarah and steal the Stone. With the help of a strange old lady (the one believed to have written the equations in the tree house) and a handsome young man named Angel Muldoon, Sarah escapes—only to be thrust into another world. She learns she is the “Stone-bearer” and with that bears the heavy responsibility of returning the Stone to the world to which it belongs. Now she must rise above her own human frailty and fears and draw from an inner reserve of strength and self-confidence to save both Sam and a world that is not her own. 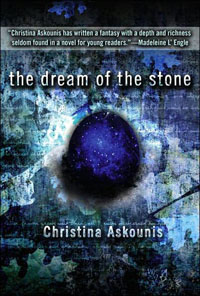 Askounis writes a clever and heartfelt tale filled with science, magic, and adventure. Her imaginative creation of an alien world that is both strange for its odd creatures and evolutionary divergences and familiar for its compassion and respect for life is all the more meaningful when threatened with annihilation at the hands of greedy corporate entities. Especially moving is the tree-being Miladras who helps Sarah when she is seemingly abandoned all alone on the bewildering planet. Miladras communicates telepathically (patiently instructing Sarah on how to quell her bird-like, scattered thoughts so his words may enter her mind) and is able to move, swimming its roots through dirt paths. “We are the Dreaming Trees. For us there are two seasons: the Season of Walking and the Season of Dreaming. When we walk, as now, we wander along the forking paths, and each one tends his own garden. When we dream, we are rooted. We dream together, each one the same dream, season upon season.” Miladras teaches her about his world and instills a great love in Sarah that helps her to understand her role in saving this fragile alienscape. If perhaps we could communicate this way with our trees, would we be so eager to clear-cut and destroy our rainforests? This is a unique tale that cleverly parallels the dangers we face in our own world, and hopefully will awaken young readers to the need for conservation. Fifteen years later, the message is pertinent still.

Click here to buy The Man Who Turned Into Himself from Amazon.com

Click here to buy The Dream of the Stonefrom Amazon.com

Click here to buy The Man Who Turned Into Himself from Powells.com

Click here to buy The Dream of the Stonefrom Powells.com