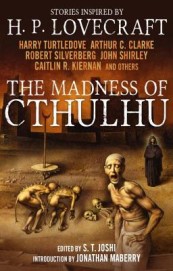 If one is interested in the eerie, dark, and cosmological instead of the gory and graphic, one might regularly return to the writings of Howard Philip Lovecraft (1890-1937). Lovecraft’s stories are more profound than scary, but they certainly can be eerie. He had a philosophy and style that, as scholar S.T. Joshi notes, conjoined the macabre and science fiction. Older supernatural horrors like vampires, witches, and werewolves had lost some of their terror in the Scientific Age of the twentieth century, but people could still worry about things that could come from the stars.

Inspired by authors such as Poe and Lord Dunsany and by the science of astronomy, Lovecraft hit a nerve when writing about cosmic horrors. He pointed out that there are things older than us to which we are vulnerable, strange things that we can barely imagine or comprehend. These ideas still resonate and chill, and Lovecraft has gained a following with his hybrid-genre tales.

As one sees here and in other tribute anthologies, Lovecraft has an almost cult-like following. Joshi, a weird tales expert, is an anthologist of note who does a fine job here. There are many famous authors included, including John Shirley, Caitlín R. Kiernan, and Robert Silverberg, and most of them have penned original tales for this anthology. All the stories were inspired by Lovecraft’s At the Mountains of Madness (1936), a novella about cosmic visitors who situated themselves in Antarctica; accordingly, the assembled stories have mostly been set in the north and take place in both the present and the past.

Not everybody agreed with Lovecraft’s perspective—the opening story is Arthur C. Clarke’s satirical “At the Mountains of Murkiness” (1940). There is the occasional joke, but more often awe and pathos; most of the storytellers take Lovecraft seriously and passionately. While their tales are by definition derivative and do not posses the authenticity of Lovecraft’s originals, they testify to the fact that so many writers have shared and been inspired by his vision.

Though Lovecraft can be disturbing, he remains of interest for those who seek “the weird,” and stories such as “The Call of Cthulhu” have become downright canonical. Science may not have found the visiting intergalactic monsters that he wrote about, but it is still possible to worry about strange things from the night skies that might already be here, waiting. These authors assembled in The Madness of Cthulhu give credit to a writer whose angst has reverberated into the present; these stories are a dark reminder of the cosmos we cannot ignore.