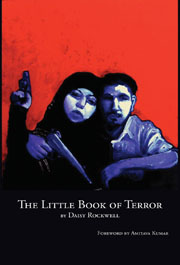 For some years, Daisy Rockwell has been blogging and posting her paintings under the pseudonym “Lapata.” Rockwell’s new volume The Little Book of Terror is a selection from that material, a curating in which the reader will find essays written with an innovative voice and illustrated by color-rich paintings in a style that blends the complex and the quaint. With the availability of this book, readers have an opportunity to encounter Rockwell’s perspective outside of the currents of the Internet: in print, her images and writings gain a contemplative and self-contained space, an autonomy totally appropriate to the quality and strength of Rockwell’s efforts toward personal political expression.

In the first section of the book (entitled “Why Do They Hate Us?”), Rockwell writes about the atmosphere following the events of September 11, 2001. The reader learns that she was a University professor at the time, teaching Hindi-Urdu and South Asian literature. Some of her students were Muslim by birth, with families from India and Pakistan. Rockwell writes of suspicion being leveled at people with Muslim backgrounds with a keen criticism, and ends the section on a deeply probing note:

The following two sections of The Little Book of Terror (“Blood Lust” and “The Best of All Possible Care”) present groupings of Rockwell’s paintings, including images depicting Osama bin Laden, Taliban leader Mullah Omar, and Iraqi premier Saddam Hussein, among others. Writing alongside her paintings, she develops her themes using extreme economy and restraint, and with an active withholding of judgment of the people she discusses. It is a singular and interesting style—a very intentional and controlled diction of remove, which acts as a light trained directly on the question of judgment itself: who is judging whom? And who is to judge? The book is a meditation on moral ambiguity, yet it supports flashes of certainty. It is a rejection, for example, of the fear mongering of war propaganda.

Following the interlude of a section entitled “Little Green Men,” the final section of the book, called “Rogues Gallery,” includes paintings of several terrorists, including John Walker Lindh (dubbed “The American Taliban”). Lindh is rendered in dark plum purple; he is bulky and shadowy, looking out in an intense way from beneath his eyebrows. In the background, like wallpaper, brighter purple and yellow flowers reach across a mottled but bright green field. The color in the painting has an intense brightness but also an intense depth. There’s a sense that overlapping and even contradictory lenses are being used to look at this subject.

In the text accompanying this painting, readers will notice deadpan humor, careful culling of the facts, and meticulous crafting of the right few words. Rockwell distills the form of the essay into something like the combination of a news report, pithy remark, and poem:

John Walker Lindh is the ultimate foreign exchange student.
He left the U.S. to study Arabic and ended up training with al Qaeda in Afghanistan.
His Arabic is reportedly quite good.

The Little Book of Terror is dissent at its most considered. Here, Rockwell speaks questioning to power; complexity to the simplistic, black and white militaristic stance of war; and ambiguity to the legitimacy of the so-called “war on terror” being conducted by the United States. By offering her point of view in a blend of discernment, humor, outrage, and ethical sense, Rockwell bravely makes a case for the value—the necessity—of personal political expression across the arts and beyond.