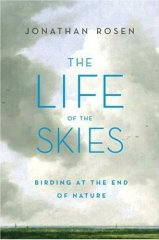 Near the start of his lush, expansive meditations around the subject of birdwatching, Jonathan Rosen proposes that there is “an erotic component” to knowledge. The thought is almost an aside, one of a thousand delicious tidbits and marginal notions that flutter through the text, but it echoes the book’s central, mystical tone. While Rosen returns again and again to Edward O. Wilson’s term “biophilia,” the innate human need for affiliation with the natural world, that concept is far too dry to convey the passionate impulse Rosen wants to explore. Repeatedly, too, museum collections of stuffed bird skins or bodies soaked in chemical preservatives are contrasted with the deep-texture experience of being “in the field,” snake-proof boots and all. While the scientific study of biology is celebrated in these pages, it is celebrated not only as a field of knowledge but as an arena for encounter with mystery. The figures with whom Rosen identifies—be it Alfred Russell Wallace collecting live cockroaches from a bakery in Malta to feed the pair of lesser birds of paradise he’s transporting from Singapore to London in 1862, or the contemporary curator of the American Museum of Natural History’s bird collection, recently tanned from a trip to Vietnam, explaining how the museum uses a colony of flesh eating beetles to clean skeletons for eventual display—are adventurers, even visionaries, dedicated to something slightly absurd and wholly wonderful. This, ultimately, is Rosen’s argument in favor of birdwatching; it might seem silly to stand at the outskirts of the municipal sewage treatment plant, binoculars in hand, but the experience is likewise awe-inspiring. The exhilaration of such communion, such knowledge, is, Rosen holds, religious in the most profound sense.

Rosen, author of The Talmud and the Internet, proceeds in a manner reminiscent of the rabbinic tradition of commentary via digression and multiple lines of storytelling. He gives a midrash on rheas and cassowaries, a homily on extinction, and weaves together a wealth of knowledge and experience such that the final product, this book, gives some sense of the thrill he associates with watching griffon vultures circling above the Golan Heights or knocking banana spiders off ones shoulders in the hopes of sighting the Lord God Bird tonguing insects from the trucks of trees in a Louisiana swamp. That John James Audubon’s rifle shares space with Emily Dickinson’s thoughts on the “Eclipse” that is God, and that Transcendentalists and Hasidim share space with the Persian Sufi poet Farid ud-Din Attar, whose The Conference of Birds is at once an “avian epic” of thirty birds on a religious pilgrimage and an allegory for religious phenomenology, seems as necessary as it is fascinating. The kabbalistic story of the shattering of the vessels in the act of creation and the ensuing responsibility of tikkun—the gathering, by humans, of individual divine sparks in order to repair the cosmos—stands for Rosen as “a very beautiful metaphor for birdwatching. Or perhaps birdwatching is a living metaphor for this mystical process.” Such interconnectedness is the great strength of this book. One can, of course, look for birds without looking for God, but as Rosen says sagely, “I do believe that even if we are not consciously working out certain questions, these questions are working themselves out in us nevertheless.”

In poetry, as much as in the startled rise of a chestnut-sided warbler, Rosen finds these questions rendered explicit, yet as moving as his readings of Walt Whitman or Avraham Sutzkever are, he also reads biologists and hunters as poets, and experience and place as poems. Standing among the used condoms and crack vials of Central Park, Rosen roots himself not only in the particular history of that spot of land (where, in the early 19th-century, the African-American community of Seneca Village stood), but also in some deeper, bodily memory of the human species itself. Reading a passage from Thoreau about scanning distant trees from his attic with a spyglass, Rosen recalls both Hegel and a Hasidic tale on the dynamics of history and belatedness. The intertextuality is both masterful and, Rosen argues, compulsive—a mark of our humanity, our shared intellectual equivalent of birds’ feathers. Rosen likes to cite Claude Lévi-Strauss, in Tristes Tropiques, when, traveling deeper into the Brazilian rainforest in search for isolated native tribes, the anthropologist can’t get a Chopin nocturne out of his head. This, the way our minds work, can also be seen as the subject of Rosen’s book. It’s not about birds, after all, so much as birdwatching, this quintessentially human act, an act of encounter and contemplation with existence writ large. And when we ponder the anthropomorphism of Audubon’s paintings, the mingling of bones at the Neolithic Tomb of Eagles off the Scottish coast, or how a falconer calls back his bird by swinging a lure, which the animal strikes, “hunching over it with almost copulatory zeal,” it is our nature and our place in the larger living universe that is most wondrous and strange.

Birdwatching, as metaphor and act, is yet another parable of resurrection, an engagement with the raw and uncontainable force of life itself, as exemplified, powerfully, in a story Rosen tells about the poet Robert Frost. Twenty-two years old, a college dropout, and rejected by the woman he loved, Frost travelled in 1894 to the Great Dismal Swamp along the Virginia/North Carolina border. “His plan seems to have been to kill himself there, or simply to vanish somehow into the earth. He walked into the swamp until the road ended, but found a plank bridge that allowed him to cross a patch of water and keep going deeper into the swamp. Darkness came on. He lost his way.” But of course, he did not die; he came to some truer awareness of life, instead. This, says Rosen, can happen in a backyard or a city dump or even from a garret window, through binoculars. Watching birds, we catch a glimpse of something much more.