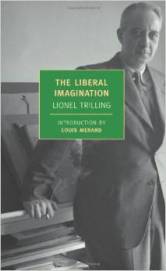 In one of the final essays of The Liberal Imagination, Lionel Trilling, mulling over the reasons for reading literature in light of its historical context, writes of the poet that “he may be used as the barometer, but let us not forget that he is also part of the weather.” Like the poet, Trilling must be treated not only as a product of mid-20th century America, but also as a writer of profound influence over the decades to come.

The Liberal Imagination, now rereleased with an introduction from Louis Menand, collects a variety of essays published throughout the 1940s. The essays, which range from a close reading of Wordsworth to musings on one of the Kinsey report, are connected broadly by the theme of liberalism in the arts. Liberalism, which Trilling defines as a “mild suspiciousness of the profit motive, a belief in progress, science, social legislation, planning, and international cooperation,” was the foremost intellectual movement of the day, and in these essays Trilling deals with both its greatest achievements and its shortcomings. He identified himself as a liberal critic, yet he has no compunction in taking to task what he felt to be liberalism’s greatest sins: a preference for the political over the aesthetic, a cynical belief about the nature of humankind, and a worship of progress at the expense of a sense of history. Many of the essays deal with how liberal thought has affected which writers we deem valuable; Trilling is quick to praise writers who are thought of as triumphs of liberalism (Mark Twain) as well as defend those whom he believes to be unfairly maligned (Henry James).

One of the pleasures of reading Trilling now, a half century after his book was first released, is that we are at nearly the same remove from him as he was from most of the writers and thinkers he wrote about. Trilling was keenly aware of how the passage of time affected how a work was read, and today The Liberal Imagination reads as a strange combination of datedness and prescience. Certain parts, such as his praise of Freud, strike a false note for a contemporary reader, but elsewhere Trilling’s ideas are just as relevant as they were almost sixty years ago. What Trilling said about the 19th century—“if the mechanical means of communication were then less efficient than now, the intellectual means were far more efficient”—we might today say about the 20th century; even in the digital age, Trilling’s aesthetic critiques are still insightful, his political critiques still biting.