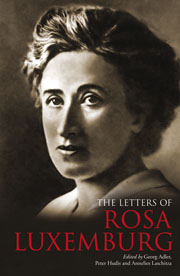 The apartment in which I write this essay stands on a central street in a major post-Soviet, Eastern European city—a street once named after the incomparable Rosa Luxemburg. It does not matter which city, because every city in the Soviet Union had one. Though Soviet citizens could be forgiven for not quite knowing why this was so. Luxemburg was a sanctified saint of the revolution in a way she would never have been if she had lived to see the Revolution’s second birthday or to denounce its moral abominations any more than the little she had time to do. After Stalin forbade the publication of her books in 1931, “Luxenburgism” became a reviled sobriquet of sectarian contempt for schismatic tendencies, only rivaled by “Trotskyism’’ in insidiousness. The bogeyman who scares children before bed, it was an injunction to toe the party line and a criminal referent amidst a permutation of clattering, contradictory others. Running afoul of a purge one could be prosecuted, for example as an American agent, a counter revolutionary, Luxemburgian Revisionist, a currency-hoarding, French-sympathizing, anti-Soviet saboteur.

A large batch of Luxemburg’s letters, perhaps a majority, was kept under the proverbial lock and key in Moscow at the Russian State Archive for Social and Political History. A fact that has gone unremarked in the Anglophone literary sphere is how much their publication now is an effect of, testament to, and justification of the opening up of the Russian archives. These letters were deemed unacceptable and remained unpublishable for exactly six decades, thirteen years longer then her life. Paradoxically, this is one of the many reasons that “Red Rosa” remains of the few major communist intellectuals to remain untainted by the later outcome of events.

Correspondence was her sustenance and a basic fact of life for her, kept up daily, and consequently forms a large part of a vast oeuvre. Her work (especially her economic work) is still scandalously under-translated, but this volume is the opening salvo of a collected works to be brought into English collaboratively by the Rosa Luxemburg Stiftung, Karl Dietz Veralg, and Verso Books. Though we do not lack biographies, especially in French and German, this collection offers a litany of new insights into her character and her quick evolution as thinker and political insurgent.

Luxemburg was born in the exquisite Mannerist-Renaissance gem town of Zamość, Poland, a Jewish subject of the Russian empire. Diminutive and sickly in the Proustian manner, she was something of an invalid dreamer from her childhood onward. Manifested from an early age also was the indomitable thirst for social justice. Her identification with simple, impoverished Polish workers remained the fundament of an idealistic belief in the basic decency and agency of the working class. Her mythical eloquence, coupled with fiery charisma in front of a crowd, earned her quick ascendancy through the party hierarchy. The letters alight her myriad contradictions.

Steeped lustfully in her self-willed German culture—the first thing she does when she gets to Berlin after her Swiss studies is to acquire German citizenship through a marriage of convenience, deportation being a serious liability in her profession—she rather marvelously mocks the “Swabians,” the German “idiots and sleepyheads,” the Prussians with their “arrogant demeanor, as if each one had swallowed the stick previously used for beating him!” An entertaining subplot of the book is Luxemburg’s wry astonishment at the cultural chauvinism of even the most learned and humane of the German Democratic Socialist Party leadership, whose principal “opinion [is] that one cannot do the Polish workers a greater favor than to Germanize them, but one may not say this publicly.” The SDP would continually defund Polish socialist newspapers in the Prussian occupied provinces for the “crime” of bringing up the “Polish question.” One is forced to acknowledge two particularly Russian intuitions: the first being that the exemplars of the highest expression of humanist idealism love the world but very often do not particularly like anybody in it (perhaps the moral of the romantic 19th-century Russian literature from which Luxemburg sprang); the second being that one should never trust a German. Of particular interest for the connoisseur of historical intrigue and a minor cause for glee is one of the last letters of the collection, an espionage missive sent to support Fred Fuch’s secret trip to meet with Lenin in December 1918: “Dear Vladimir, I am taking advantage of ‘uncle’s trip’. . .”

There is an undeniable incongruity to her gentleness and the gashes she induced with her rapaciously sharpened elbows while jostling with men for respect as a theoretician. Sheathed in the impenetrable armor of unbending self-certainty on the outside, and waging incessant internal purifying battles against factional deserters, equivocators, scoundrels, predatory opportunists (of these there are hordes to dispatch, mostly mediocrities), and reformists (a more dangerous genus, composed of some of the most talented) within the international movement, she is the girliest of 18th-century girls at her romantic core. She is co-dependent, a socialist hero worshipper, moody, frilly, self-deprecating. Despite the valiant efforts of several generations of feminists, she is an utterly lost cause to that movement. She couldn’t stand to see women riding bicycles (because it is “seldom aesthetically pleasing. I am terribly old-fashioned, as you see, and even ‘philistinesque,’ [‘philistros’],” she berates the Dutch feminist Henriette Roland Holst, willfully ignoring the fact that Dutch socialists come out of the womb on bicycles). We always knew that she had seduced Clara Zetkin’s son Konstantin when he was half her age, but until now we did not know that the usually dour, depressive, distant Leo Jogiches had threatened to not “let me go and declares that he would sooner kill me” on a bus trip through Poland. (Her sadly cloying, futile love letters to an emotionally unavailable workaholic take up the first decade of the correspondence.)

Her correspondence with a Jewish Bundist would in modern times get her labeled a “self- hating Jew.” She would have of course replied to the charge, as one always does, that she did not hate herself for being Jewish, only certain other, insufferable, Jews. Indeed, over the matter of Jewish emancipation she is quite unequivocally universalist: “What do you want with this theme of the ‘special suffering of the Jews’? I am just as much concerned with the poor victims on the rubber plantations of Putumayo, the Blacks in Africa with whose corpses the Europeans play catch.” That familiar debate repeats itself a century later, ad nauseum, between “universal Jews” and “Jewish Jews” with the Palestinian question. This is a logical emanation of her internationalism and the fact that she is not keen to embrace any one of the strands of her myriad identities at the expense of totality—the very idea of identity politics being a dead end, if not an outright manifestation of false consciousness.

The various party schisms and maneuvers, the schematics of tactical feints and internecine internal politicking of the bygone world of socialist Europe, are here laid out in their full glory. Though let it be said that Luxemburg was never a partisan of the petty party fragmentation and habitual leftwing schismatacism . The sense that half of Berlin would skewer its mother and eat the other half raw for an editorial position at the Vorwärts, Berliner Volksblatt is alleviated by the collection’s enticing taste of the internal disputations of the golden era of the great Marxist ideological debates. Kautsy vs. Bernstein, Prolecult vs. the Lunacharskian cultural apparatus, the theory of attrition vs. General strikes, Blanc and Guizet vs. Mignet and Cunow on the interpretation of the French Revolution—one can follow along with her as thinks through the issues of the day and the problems of classical Marxism and pours torrents of abuse on her prevaricating enemies. This might be a hindrance for the general reader. That Luxemburg was one of the great spirits of her age is without doubt, but if the entertainment value and intellectual frisson of the specter of a young Luxemburg declining to translate an article of Plekhanov’s for lack of time does not strike one as thrilling, one should read the letters of Rilke or Voltaire instead.

Written in a mixture (sometimes in the same missive) of Polish, Russian, German and Yiddish, with portions in her workmanlike French, the book is a work of titanic scholarship. The collection is gathered together from archives in Amsterdam, Berlin, New York, Moscow, Antwerp, Bonn, and represents the largest collection of her letters ever published in English. There are huge gaps, of course. The majority of the Polish letters were immolated in the Warsaw Blitzkrieg. No letters of French provenance are available. And much remains in private hands; the editors plead outright with keepers of unknown letters to come forth in the introduction. Another flaw of the book is that the original language of individual letters is not always indicated, and in certain cases can be gleaned only through the nationality of the correspondent and by deduction from the location of the archive it is housed in. The book also lacks a chronology, though the rest of bibliography is exemplary.

The Letters of Rosa Luxemburg does not betray its times without proffering a terminal force majeure. The narrative picks up speed and trajectory and flies along the axis of a historical epic, slowly building toward a grand and grandly tragic denouement. The letters after 1910 gain urgency in direct parallel to events in Europe. With ever mounting disillusion that Europe’s working classes can be kept from butchering each other in fratricidal conflict in defense of reactionary regimes, she unremittingly breaks Prussian law by making pacifist speeches. Promptly arrested, she spends the First World War in prison. We read her pen a series of heartbreaking condolence letters as friends, comrades, and former lovers are killed on the Western front. Released under a general amnesty for political prisoners in January 1919, she throws herself back into organizing the German wing of the revolution blooming all over Europe. Though she heartily and knowingly opposed the unprepared and doomed Spartacist uprising, she was outvoted, and threw her energies into the fray anyway. The rebellion was quickly crushed, its leaders tracked down and arrested.

On January 15, while waiting with Karl Liebknecht to be taken back to prison in the back of a police wagon, members of the counterrevolutionary and protofascist Freikorps, the embryonic nucleus of the Nazi shock troops, executed them both. Her body was infamously dumped into a canal, recovered only some decades later. Her grave is now a place of pilgrimage. She is beloved by anarchists. Her letter on Goethe, written from prison during the bleakest days of the war, is the book’s finest distillation of her creed and the manner in which she strove to live her life:

. . . at the same time how calmly, with such equanimity, he pursued his studies about the metamorphosis of plants, the theory of colors, and a thousand other things. I don’t ask that you be a poet like Goethe, but everyone can adopt for themselves his outlook on life—the universalism of interests, the inner harmony—or at least strive toward that. And if you say something like: but Goethe was not a political fighter, my opinion is this: a fighter is precisely a person who must strive to rise above things, otherwise one’s nose will get stuck in every bit of nonsense.