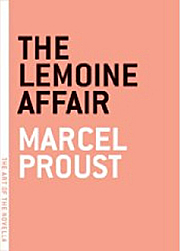 In 1908, Parisian society was amused by the court trial of self-proclaimed alchemist Henri Lemoine, whose purported fabrication of ring-sized diamonds duped the De Beers Diamond Syndicate out of nearly 2 million francs. L’affaire Lemoine, as the spectacle came to be known, saw the unveiling of the sought-after trade secret (which amounted to a recipe for heating sugar carbon at high temperatures), a calamitous drop in diamond shares, and Lemoine’s flight to Constantinople. The farcical affair sounds a bit like a case that Poe’s detective, Dupin, might have investigated just after “The Purloined Letter,”or an allegorical detail that Balzac would have worked into the vast plan of his Human Comedy. But it was an aspiring novelist named Marcel Proust who took up the matter, publishing a few short pieces on it in the Figaro that year. Proust being Proust, the novella that emerged— now making its English language debut— is something quite different from the potboiler or romance that the sensationalist facts of the case suggest.

In his In Search of Lost Time, that 3,000-page novel that would quite overshadow The Lemoine Affair, Proust’s narrator remarks that “what people said escaped me, because what interested me was not what they wanted to say but the manner in which they said it, such that it revealed their character or their absurdities.” This proclivity is on full display in The Lemoine Affair, where Proust fashions a series of pastiches that take the fiasco as their ostensible subject but are ultimately most concerned with their own manner of telling. Assuming the literary style of nine different French authors, Proust refers to the scandal in flashes: as society gossip “From a Novel by Balzac,” as a dramatic performance panned for its implausibility “In the Weekly Theatre Review by M. Emile Faguet,” or as aristocratic intrigue divulged “In the Memoirs of Saint-Simon.” Each pastiche reframes the Lemoine Affair in another genre by another author, whose literary style and characteristic preoccupations are absurdly foregrounded at the expense of any narrative progression. But this is the real fun of The Lemoine Affair— not the story itself, but its style. Proust, in a sense, plays Lemoine, counterfeiting other writers in a prismatic refraction of the scandal.

The very French tradition of literary pastiche hovers somewhere between satire and homage, but Proust elevates the form, identifying and replicating each syntactic tic and rhetorical trait of his precursors so adroitly that it can be difficult to distinguish keen observation from playful exaggeration. When Proust as Flaubert fastens his attention upon a lawyer’s oratory that is “like the gush of a waterfall, like a ribbon unfurling” and then briefly alights on the very fabric of a young girl’s corsage that “flutters like a blade of grass by the edge of a fountain ready to well up, like the plumage of a pigeon about to fly away,” it is difficult to know whether we should sigh appreciatively or smirk. To be sure, even the writers whom Proust most admired appear at least slightly ridiculous in these condensed and decontextualized forms, but his mimicry is so comprehensive that we can’t dismiss any one of them out of hand.

Proust himself found these authors difficult to dismiss, in one way or another. Some of them were pervasive academic voices he had first encountered as a lycéen, others were fashionable in literary circles of the time, and the works of some— Balzac, Flaubert, and the Duc de Saint-Simon— he had read and loved in adolescence. Yet as a writer concerned with forging his own style, Proust found it necessary to hold his influences at arm’s length. Pastiche, as a kind of performative criticism, allowed him a means of defining himself against other voices. By magnifying the Goncourt brothers’ twee aestheticism or the convoluted sentences of his contemporary, Henri de Régnier, he might reconsider similar impulses in his own writing. This is the “purgative, exorcising virtue of pastiche” he recommended to young writers so as to avoid falling into the habit of “involuntary pastiche.” He could also use the genre effectively to censure techniques and principles that were antithetical to his own increasingly distinct artistic vision. Thus Proust’s real hostility toward Sainte-Beuve’s biographical school of literary criticism emerges as an absurdly pedantic digression on Flaubert’s Norman ancestry. And in a single sentence we can perfectly observe his distaste for Balzac’s “vulgar” details: “Mme Firmiani,” writes Proust as the grandfather of French realism, “sweated in her slippers, masterpieces of Polish industry.”

The Lemoine Affair reminds us how funny Proust can be. Although In Search of Lost Time is punctuated with droll observations, they are often overlooked in favor of the novel’s weightier preoccupations. The much lighter format of these pastiches showcases the comic side of Proust’s perspicacity, which makes the novella inviting to a reader who doesn’t happen to be on a first-name basis with the members of Proust’s canon. Although the humor does stem from literary winks and nudges that were aimed at a particular milieu (such that Proust has puckishly insinuated himself and his friends into these scenarios), the distinctive style of each pastiche makes the particular folly of a given author legible even to the uninitiated. When, for instance, Proust preys upon de Régnier’s elaborate symbolist imagery by offering the exquisite likening of a strand of Lemoine’s mucus to a diamond, it’s just funny: “One could make out just the one single succulent, quivering mass, transparent and hardening; and in the ephemeral brilliance with which it decorated Lemoine’s attire, it seemed to have fixed the prestige of a momentary diamond there.”

The precise irreverence that Proust brings to both the obscure and illustrious names of French literature is a sharp little lesson in both style and relativism. Few of us read Faguet or de Régnier anymore, yet here they receive the same scrutiny as Flaubert and Balzac. And although The Lemoine Affair itself was never intended to be any sort of cultural touchstone, 100 years after the fact, it proves to be something more than a momentary diamond.