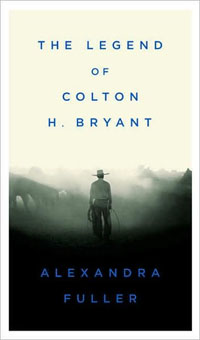 Alexandra Fuller’s third nonfiction work tells the story of a young man who grew up, lived, and suddenly died on the oil patch in western Wyoming. The British-born, Rhodesian/Zimbabwean-raised author of the fine memoirs Don’t Let’s Go To the Dogs Tonight and Scribbling the Cat has outdone herself with The Legend of Colton H. Bryant, a heartbreaking narrative about the American families who give their lives to feed our addiction to oil. There are great high plains winds and the lilt of Rocky Mountain English to go with the great greed, love, and loss in this Wild West tale, and even knowing what’s going to happen in the end cannot keep a cowboy from crying through the final pages. This is both a harsh American Western and a vital work of world literature, and it should win every major award out there.

Written by a self-proclaimed “liberal redneck” (Fuller currently lives in Wyoming), Legend embodies all the contradictions of a frontier narrative. For example, even people from Wyoming do not exactly settle down there, but travel to where the oil is. Oil, on the other hand, remains the one constant, a 24-7 reality in a West that has grown considerably less wild since drilling began: “the endlessness of the plains’ open abundance is an illusion. Nearly all the plains are already swallowed up, paved over, plowed under, flattened, hardened, drilled. You can drive across what’s left of what is wild in an afternoon or less.”

Unlike the recent film There Will Be Blood, which seems rather invested in humanizing the Devil in the shape of an enterprising oil baron (played, of course, by the impossible-to-dislike Daniel Day Lewis), Fuller is interested in telling the humble story of the Bryant family, who have built an honest life around the shady vagaries of oil production for generations. They are soft-spoken, good folk who deserve more than donuts and some cant about the importance of safety on the job.

As a period piece, There Will Be Blood also implies that the precarious nature of drilling belongs to the preceding century, when crude oil was extracted by cruder technology. The reality is much starker: Colton is one of at least eighty-nine people who died in the Interior West between 2000 and 2006 (thirty-five in Montana alone).* The railing that might have saved Colton’s life would have cost the drilling company Patterson-UTI Energy all of two thousand dollars. Instead, they were fined seven thousand dollars for his death in 2006—the same year parent company Ultra Petroleum boasted revenues of $592.7 million. It hurts to do the math, but the bottom line is clear. Safety on the patch means one thing and one thing only: the security of big oil’s profits regardless of the human costs.

The June 2008 issue of National Geographic takes a different approach by equating intensified oil production in Western Siberia with modernity. Environmental and structural problems are glossed over in order to justify the short-term benefits of the region’s explosive “cash crop.” People around the world appear to agree: we cannot not exploit the questionable boon of black gold. Incidentally, Wyoming is the home state of the term “Gillette syndrome,” a term coined by psychologist ElDean Kohrs to explain the consequences of an energy boomtown, which “experiences an increase in crime, drug use, alcoholism, violence, and cost of living, and a decrease in just about everything good except, arguably, money.” The Legend of Colton H. Bryant does not indict the hard laborers who take pride in their work, nor does it exculpate the modern-day robber barons that own the means of production and ultimately care very little about maintaining a high quality of life for their workers.

Fuller clearly wanted to write a different kind of nonfiction work than her first two, and she has succeeded beyond our wildest, most American dreams. Nevertheless, readers will recognize her intense reckoning with the recent past from Don’t Let’s and Scribbling in this book, which doesn’t feature her at all. As with her first two books, Legend does not offer us some kind of impossible reconciliation or absolution, but rather something readers might not expect: a profound identification with the Bryant family, and, yes, a hopeful sort of pride in perhaps one day becoming American like them.

That said, the old saw ‘don’t judge a book by its cover’ goes double for The Legend of Colton H. Bryant, which depicts a cowboy, lasso in hand and back to the camera, amidst a blur of horses. Maybe this will sell more books, just as the Wyoming tourist board must evoke a sanitized version of the Wild West to encourage visitors to its magical state. There are some horses in Legend, to be sure, as well as rodeos and Mountain Dew, but without an oil rig looming in the background, one wonders what the book designers were thinking. Inside, however, one finds a gut-wrenchingly beautiful narrative that will make both Upton Sinclair and John Steinbeck turn over in their graves—this time with immense pride.

*Drilling has not become safer the last couple of years in the Interior West. On May 15, 2008, a Montana man fell to his death working on the western North Dakota oil patch, the eleventh such death in ten years. Owned by Cyclone Drilling of Gillette, Wyoming, this particular rig pumps out the crude for the Houston-based Murex. This most recent tragedy highlights the national scope of oil interests in the region, as well as intimates the national response necessary to force oil companies to move beyond what Fuller describes as “safety, safety, safety, have a doughnut. Safety, safety, safety, now go out there and get as much gas out of the ground as quickly as you can.”