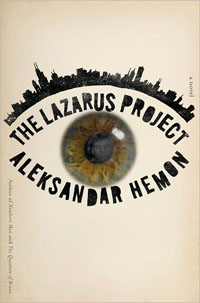 “Why does the Jewish day begin at sunset?” This is the quiet refrain posed by Lazarus Averbuch, the evasive subject of Aleksandar Hemon’s new novel The Lazarus Project. The novel interlaces the narrative of Vladimir Brik, a displaced Bosnian refugee in Chicago who receives a grant to write about the untimely and violent death of Lazarus, with that of Olga Averbuch, Lazarus’s sister who is forced not only to come to terms with her brother’s death, but also with the humiliation and condemnation of being an unwanted immigrant at the turn of the century in America.

Brik is a writer for a Chicago paper—his column entitled “In the Land of the Free,” where he discusses being a stranger in a strange land, has given him a bit of local celebrity, enough so that when he applies for a grant to take on this Lazarus project, he is easily awarded the money to head back to Europe to see what remains of Averbuch’s beginnings. With him he takes along an adventurous old friend from home, a photographer named Rora, so that he can have snapshots of the landscapes of the Ukraine, Moldova, and Bosnia. As they follow the path taken by Averbuch to escape the anti-Semitic 1903 Russian pogroms, this road trip through Europe, encapsulated with male angst and a cast of local characters that charm and inform, becomes a more delightful, mature, and textually innovative version of Everything Is Illuminated.

Meanwhile, in what the reader can only assume is Brik’s story about Lazarus—one hundred years before Brik’s own pilgrimage—Olga Averbuch is trying to get a proper Jewish burial for her brother, who was gruesomely shot by a Chicago policeman when he attempted to give the officer an important piece of paper. (This murder evokes memories of the Amadou Diallo killing in New York, when policemen unloaded forty-one rounds into Diallo’s body, another immigrant story that begs to be told.) Olga’s pleas fail to impress the police, and she gets taken in by Lazarus’s associates, who further confuse and inform her about immigrants’ rights.

Hemon weaves these two striking narratives together, aesthetically and physically joining them with the glue of several black and white photographs between each chapter—evidently meant to be Rora’s, although credited to Velbor Bozovic and the Chicago Historical Society. What at first seems gimmicky proves its very worth as the novel does: neither the photographs, Brik’s travels, nor Brik’s writing about Olga and her brother ever get to the core of Lazarus, his past, and his death. Everything is just a suggestion, a hint at what could be the truth. This is a narrative of the void, the unknown. The narrator himself states it in his first line: “The time and place are the only things I am certain of: March 2, 1908, Chicago. Beyond that is the haze of history and pain, and now I plunge.” Never do we receive a lucid vision of Lazarus or his former life. Never do we understand why Brik himself can’t paint this portrait of this émigré, even as we uncover cities and items left behind. Never are the photographs direct representations of the chapter. We can peel back layers of narrative, but Hemon never lets us get through to the heart of the matter, as if there is still another gossamer filtering the light source.

The novel opens and closes with a brutal and almost random murder, one from each narrative. “Why does the Jewish day begin at sunset?” No answer is given, but The Lazarus Project almost grants this as a response: So that what is unclear is only in the beginning; so that life can grow out of death; so that life is what is remembered at the end; so that we are free of death in life. This is a collection of voices and stories of the other, of the sunset waiting for a sunrise that may or may not ever emerge.