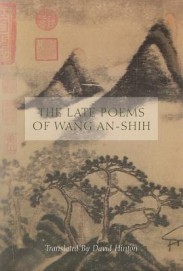 “Part peasant and part Prime Minister” is how translator David Hinton describes Wang An-Shih (1021-1086), as he has been known primarily for his Sung Dynasty populist political reforms. Now, thanks to Hinton’s new translations, “poet” can be added to Wang’s descriptors.

At the age of fifty-five, Wang become a “recluse”—wandering the mountains and writing poetry. His verse very much fits into the “rivers and mountain” tradition, offering lush views of natural beauty. Yet Wang An-Shih, a student of Ch’an Buddhism (an early form of what we now call Zen), often injects religious teachings into his work: “Why insist on clinging to what little you can still remember?” he asks at the end of “Talking with Manifest Sky Ascent,” promoting the Buddhist concept of non-attachment.

Wang’s poems feel most resonant when he reveals his vulnerability. Watching his reforms undone by those in power, his reputation smeared, Wang comments in “Chants,” number three: “How do you grow old living with failure and disgrace? / Stay close to the cascading creek: cold, shimmering.”

One of Hinton’s strengths as translator is his ability to capture nature, the setting of so many of these poems. Only someone who knows nature well could offer lines like this: “As plums scatter a few flecks of snow, / wheat founders in a long river of cloud.” Yet Hinton can be awkward at times, especially in the longer-lined poems, where he tries to capture too much. He closes “Sun west and low,” for example, with this confusing construction: “Ducks blurred in fire drift, gold on the chill of deep water, / dreams a ruins of distance and worry among this birdsong.” Who exactly is doing the dreaming here?

The short-lined poems, more distilled by Hinton, do not offer such problems. “Off-Hand Poem,” here in its entirety, flows with ease:

for I’m sending in these words a place
far from this loud world of confusion.

While not in the exalted ranks of such Chinese poets as Li Po, Tu Fu, Wang Wei, Wang’s poetry possesses the power to transport the reader to another time and place, far from our own “loud world.” For that, readers will be grateful, both to Wang An-shih and David Hinton.