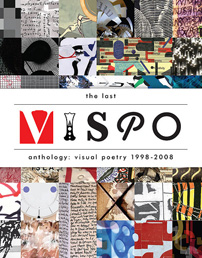 Encountering The Last Vispo Anthology, one is struck by its graphical beauty, richness, and immensity. With 250 pages of illustrations and sixty-five pages of artistic and critical commentary, this collection will certainly join the small pantheon of essential literary arts anthologies focusing on visual works. Its expanse provides an important and provocative time capsule of aesthetic innovation on a global register, one that will likely be considered as important as Emmett Williams’s 1967 An Anthology of Concrete Poetry. Heterogeneous yet focused, it provides a useful guide for students, solid documentation for followers of the form, and can be valued by anyone who wishes to be stimulated by the machinery of language. 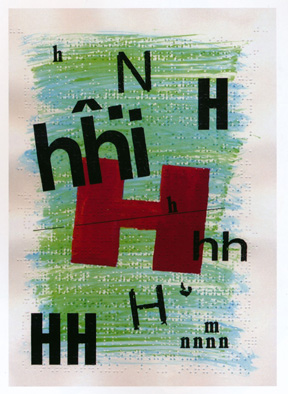 Although The Last Vispo Anthology is divided into several sections—Lettering, Object, Handwritten, Typography, and Collage—readers will quickly discover a tremendous amount of crossover between works given these designations. Here the letter-as-visual-substance reigns supreme; in essence, this is a book in which members of the various alphabets on display become a primary focal point, and the concept, type, and uses of line in poetry and poetics takes on an entirely other, often geometry-based, identity. The book features many colorful, wide-ranging displays of visual expression (though its black and white works are equally compelling), where old school methods meet with, and are then supplemented by, new approaches in the co-mingling of fragments from our alpha-imago datastream. There’s really no “either/or” to these works; they are all pleasurably “and/and/and.” 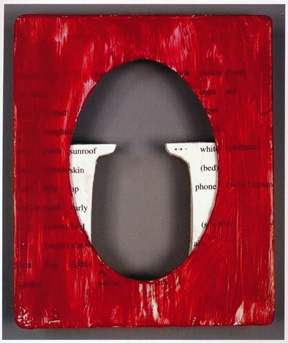 Likewise, the artistry involved with The Last Vispo Anthology conforms to no singular aesthetic. Individuality and non-trivial polemical ideologies do emerge, although it becomes clear, in a close study of the work, that while some visual poets have a “signature” style or political objective, many excel at performing variably. A telling example of this trait is found in Fernando Aguiar’s works, which appear in Lettering, Object, andTypography sections of the anthology; his “Ecological Sonnet,” a poetic photograph of a suburban park, diverges in all possible ways from his “Hh,” which collages letters and watercolor painting atop a sheet of braille. Derek Beaulieu’s “Untitled” sculptural assemblages of rigid, checkered, stencil letterforms in the Lettering section impressively contrast with the fluid miasma of myriad shapes, letters, and lines he limns in “Untitled (for Natalie and Jeremy)” that appears in Typography. K.S. Ernst’s contributions, as seen in “Viole(n)t” and “Hard to Hear Year” (Object), include three-dimensional sculpture-word-poems that use lighting and shadowing to amplify visual play. Another type of work she presents, “Drop Caps” (Typography), even though comparatively flattened, reflects a completely different kind of complexity resulting from the addition of scattered of words, clear symbolic shaping and hand painted elements. These are just a few of the works included in the anthology, but they well illustrate how imprints and impressions can be made using multiple approaches; we rarely delve into the same visual poem twice.

Concrete, visual, and graphically patterned poems, as reflected in previous anthologies, are known as being compositionally intriguing, and sometimes perplexing artifacts. Looking back at such works through the lens of Hill and Vassilakis’s anthology, we can see how those writers, while masterful, embodied a non-digital aesthetic and thus their works often bestowed a type of rigidity alongside characteristic playfulness. Poets equipped with powerful hardware and software possess tools that avail creative advancement. With each turn of a page inThe Last Vispo Anthology, we experience yet another imaginative method uniting thought and expression through visual representation. 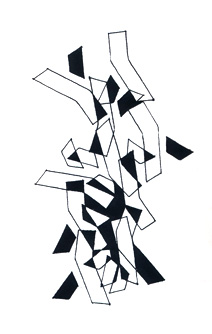 The severe degree to which certain authors hide, obscure, and distort texts that are often purposefully ambiguous frequently adds challenges and difficulties to our reception of their message. Such obstructions have the effect of slowing down consumption of the poem, requiring readers to take time to think about its content while contemplating numerous possible pathways. These poems must be considered on multiple levels, and may be utterly exhausting to read (usually in the best of ways). The Last Vispo Anthology contains an abundance of wordless, asemic writing that by definition demands a type of integral participation, far beyond interpretation, by the reader.

With 130 contributors, including Jim Andrews, Jaap Blonk, Johanna Drucker, Christian Bök, Jesse Glass, Geof Huth, and Sheila Murphy, The Last Vispo Anthology is, finally, a veritable “who’s who” of contemporary visual poetry. A few active practitioners who are not included come to mind, but the premise and utility of the work as a representative whole doesn’t suffer from these exclusions. Most of the contents are well served by the large page format (8”x10”), although the details in a few of the pieces are unfortunately hindered due to their size (i.e., text and/or detail are too small to read).

Appropriate to our time, The Last Vispo Anthologycontains poetry of both elegance and distress. Writing and textuality have been through a lot, and due to wear and tear caused by poetry’s maturation and aging, poetry of the age demands scrutiny and reflection through combinations of verbal and visual iconography. The panoply of methods in this anthology cultivates a branching and diversified aesthetics. At this late date in writing’s history, words have loosened their hold on poetry—a condition reified in these works. As the book progresses, its multiplicity and energy only gains momentum; if there are any contemporary poetry anthologies that are likely to bring what Blake described as “eternal delight,” The Last Vispo Anthology will be among them. In fact, the word “Last” in this book’s title clearly indicates not a final “say” on the subject or the “end” to the importance of documenting such works, but rather gives this artistic discipline and pursuit a solid material platform upon which to persevere through the delicate and delirious ephemeral morass of networked information.

In the spirit of visual poetry, Chris Funkhouser has created an electronic footnote describing the process of writing this review.