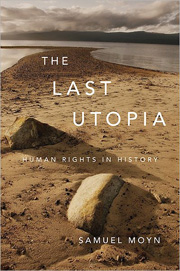 As discourse, rhetoric, ideal, and mantra, the specter of “Human Rights” haunts and permeates our world. This wraith is a reflection of our deepest and most humane hopes and aspirations for a better future. Respect for the dignity of the body, entitlements to education and clean water, freedom for thought and deed, of speech and assembly, and protections from government repression are all things that should be a human being’s birthright. “Human Rights” are in fact the watchwords of our age, engulfing and surrounding us, and are invoked constantly: ours is nothing if not an empathetic age. These words also serve as justifications for military interventions, the West having abandoned the prudence of risk-averse sleeping giants, and increasingly laboring to dislodge totalitarian regimes wherever circumstances present themselves—a barrage of artillery shells is pounding apartment buildings in Homs, Syria while I write this, and the West debates possible courses of action agonistically.

So where exactly does the idea of “Human Rights” come from? In his exemplary study The Last Utopia, Samuel Moyn, a historian at Columbia University, offers a revisionist and convincing riposte to the classical account of its development. The orthodox narrative is one of incremental and syncretic evolution, originating in Greek philosophy and stretching to a rebirth of idealism after the horrors of the Second World War. It posits, in brief: early Jewish jurisprudence and the political ideas of the Stoics were codified into the godly ‘natural law’ of early Christianity. The statutes of this celestial order were augmented by medieval sources, fashioned into cohesive form by the Renaissance, buttressed by early humanism and extolled as the emancipatory foundation by the Enlightenment before being tempered by utilitarian 19th-century protections for aristocracy. The phrase “human rights” remained mostly foreign to Anglo-American ears and sensibilities, but the French revolution’s call for the rights of man reverberated until the triumph of the United Nation’s ratification of the Universal Declaration of Human Rights in 1948.

For Moyn, though, that painstaking genealogy is almost entirely irrelevant. He locates the modern foundation of the concept in the disillusionment of postwar political arrangements, demonstrating conclusively that the assertions of universal rights by the allied powers were not to be honored. He does not consider the ensuing struggles of decolonization (and the civil rights campaign in the US) to be a struggle of “human rights,” but a continuation of the “rights of nations” agenda of the Versailles Treaty. This utopian idea had to first run the nationalist course before the leap could be made to Hanna Arendt’s ‘right to have rights’ for the individual. The Cold War impasse only renewed obverse ideologies—internationalisms, socialisms, third worldism, and fresh strains of communism (Maoist, revisionist, Althuserian, Marxist humanist). Before “Human Rights” could become the last utopia standing, it would have to vanquish or outlive a host of other, competing utopias that gripped the radical imagination. These other utopias were communitarian and economic, giving credence to the critique of “rights discourse” as one facet of neoliberalism.

For Moyn, 1977 was the pivotal year zero of “Human Rights.” With the unwinding of the Cold War, Jimmy Carter’s ascension to the U.S. presidency was accompanied by a declaration of human rights as the U.S.’s state policy; Amnesty International won the Nobel Prize and Charter 77 was founded in Czechoslovakia. In a chapter titled “The Purity of this Struggle,” Moyn writes of Western policy combining with the resistance of intellectuals in the Eastern Block. This emergence marked a truly international consensus, represented by the “refusenik” politics of Natan Sharansky and Andrei Sakharov, the spiritualism of Solzenitsyn, Václav Havel’s existentialist approach, the “Antipolitics” of György Konrád, and the legalist demands of Alexander Esenin-Volpin to make the Soviet Union respect its own constitution.

The signing of the Helsinki Accords heralded the inevitable bureaucratization and professionalization of the proliferating non-governmental organizations (NGOs). The chapter on the responses of International law illustrates the cautious approach taken by Western elites on the question of human rights during the Cold War. Implicitly, this is also story of the resurgence of the sovereign state, the rise of John Rawls-ian orthodoxy among political philosophers (though A Theory of Justice is mentioned only once, in the epilogue), and the coupling of “Human Rights” with state citizenship. To be a citizen everywhere, one has to be a citizen somewhere, as anyone who has ever been stateless has learned the painful way.

The book concludes with the formation of the “Human Rights” apparatus, and somewhat maddeningly draws a boundary at discussing the outcomes of the movement’s ideals over the last two decades. What happened or did not happen in Serbia, Rwanda, Darfur, Iraq, and Libya bizarrely fall outside of the purview of Moyn’s study. Yet, the argument is trenchant, subtle, and original; as such, it has led to vigorous criticism from all corners. Many who have weighed in question the book’s conclusions, but all have leavened their critique with a tone of subdued admiration—Moyn’s scholarship and bibliography are excellent. The Last Utopia is not the last word on human rights, but it is a heady place to enter the debate.