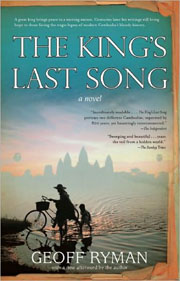 “The words will come again, when your people need them most. When they cry out, tormented and disrespected, this book will flourish to shade them from the sun.”
—Leaf 155, Kraing Meas

In The King’s Last Song, noted speculative fiction author Geoff Ryman weaves together ancient legend with a gritty view of modern Cambodian life, and the pattern that emerges is surprising. The novel conveys not merely a story, but the light and darkness, despair and hope, tradition and Westernization that is Cambodia itself.

Jayavarman VII, the beloved legendary Buddhist king of Cambodia, has never been needed more. The government is in corrupt shambles, no one knows who can be trusted, and continuity from day to day cannot be taken for granted. When archeologist Luc Andrade’s team unearths the Kraing Meas, the golden book written by Jayavarman himself, it is not particularly a comfort but a worry. A target for art thieves and any number of factions with questionable motives, the book is a historical treasure that endangers anyone near it. When Luc, along with the book, is kidnapped, two of his employees are forced to team up if they want a chance at finding him. William is a peaceful “motoboy” who wants nothing more than to support his family. Tan Map, an ex-Khmer Rouge soldier whose family has long since been killed, doesn’t know how to live without war.

As Luc tries to keep himself and his fellow prisoner alive, he begins to translate the Kraing Meas for his captor, who turns out to be an official in the Pol Pot regime. Interspersed with the present-day action, the tale of Jayavarman unfolds: In his childhood he was called Prince Nia, or Prince Hereditary Slave. He continually tried to break down the barriers between nobles and the slaves and workers. He spent his adult life caught between worlds and trying to unite them. In one world, he was a slave captured in war, surviving only by the love he had for Fishing Cat, his childhood slave-friend. In the other, he was a king, married to a compassionate noblewoman, but with a slave consort. As a ruler he used love, not fear, to lead, but he also arranged for a troublesome son to be killed in battle. He was love and war, devotion and brutality.

While peaceful William, war-consumed Map, and Cambodia-loving Luc could easily be flat, typecast characters, Ryman steers clear of such simplifications. Their interwoven histories are at times noble and at times horrifying, laced with profound emotions and punctuated with atrocities. The King’s Last Song leaves one questioning preconceptions of good and evil, and conflicted between hope for and discouragement with the human race.