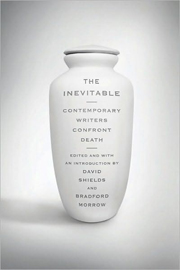 One of the defining questions of the 20th century was, as David Shields and Bradford Morrow write in their introduction to this new anthology, “if there is no transcendental meaning, and we know we are mortal, how do we construct a life with value?” If The Inevitable is any indication, this question continues to shape the intellectual and moral situation at the start of this century. In our post-Nietzschean world, human life comes burdened with the need to account for itself—a necessity made urgent by the looming and “inevitable” promise of death.

Shields and Morrow, addressing this challenge head-on, have gathered together twenty contemporary writers and set them loose on the subject of mortality. The book, as they write in their introduction, is an “attempt to look at death from distinctly different points of view, by writers who see death as a brute biological fact that does not necessarily guarantee some passageway to eternal peace or punishment. And while this gathering may center on death, it is ultimately about the existential fact of our ineffable selves, our mortal bodies, death’s fragile ‘other half’: life itself.”

Compiling essays that don’t hold up religion as an absolution of the problems of life, Shields and Morrow invite readers to face those problems directly. There is nowhere for the reader to hide in Sallie Tisdale’s excruciatingly detailed meditation on flies. Neither is it possible in a review to convey how profound are these words when they follow that meditation: “When I begin to accept that its very fragility and perishing nature is the beauty in life, then I begin to find safety inside a burning house. I don’t need to escape if I know how to live inside it.” There might be religion in this book, but it’s a religion of this world.

Though distinct in style, and in the kind of solace it offers, The Inevitable is quite similar to Shields’s earlier book The Thing About Life Is That One Day You’ll Be Dead (Knopf, 2008), in which he arranges a collage of medical facts, reflections on death, details about his own failing body, and observations about his dad’s seemingly indestructible one. One of the things that made that book a winning tragedy is that while his ninety-plus-year-old father seems indestructible, the reader can’t escape the knowledge that he isn’t. And the implication/reminder follows immediately: neither is the reader. So the solace comes not from escaping the specter of death for the length of an entertaining book, or from reading self-assuring promises that no writer is in any position to make, but from the satisfaction that comes from seeking truth. We know that, as Lynne Tillman writes in The Inevitable, “Of death, mortals are absolutely ignorant. The dead, fortunately, are beyond caring.” But in the lead-up to our own deaths, our thinking about the end is of the utmost importance to how we live.

Our responses will be as varied as we are—and one of this anthology’s strengths is that in featuring so many writers it has a chance of having something for every reader. You will have your favorite. It might be Joyce Carol Oates’s portrait of grief after losing her husband, Kyoki Mori’s response to her mother’s suicide, or Margo Jefferson’s sociological distillation of the deaths of “Negroland.” Mine is Kevin Baker’s deliberation over whether to be tested for the lethal Huntington’s disease (a rare hereditary condition he had 50/50 odds on), which demands us to imagine what we’d do if our chances of survival were 50/50—and to think about what we will do since our chances are zero.

Not surprisingly, The Inevitable is wildly quotable. Here’s an almost-random sampling of some of the passages underlined in my copy: “If one believes people are dying as soon as they are born, then living itself is an illness overcome only by dying.” (Lynne Tillman) “The solace of anonymity is that it is what bonds us finally with every other human.” (Robin Hemley) “There are some presences whose absence can undo even the strongest people.” (Christopher Sorrentino) “In reality, unlike fiction, people’s lives don’t run according to some overarching narrative.” (Kevin Baker) “Even if one can imagine dying or being dead, one can’t represent it autobiographically.” (Tillman) “Honoring the dead, delighting the living, making the world a safer, nicer place. If that is too humble a definition of art, then one wonders why it is so rarely achieved elsewhere.” (Geoff Dyer)

David Foster Wallace, who Shields and Morrow quote in their introduction, wrote that “a big part of [a writer’s] job is to aggravate this sense of entrapment and loneliness and death in people, to move people to countenance it, since any possible human redemption requires us first to face what’s dreadful, what we want to deny.” You’ll find twenty writers here who are doing that same job, giving sustained attention to this most final subject and thereby offering what might be your best hope for redemption.