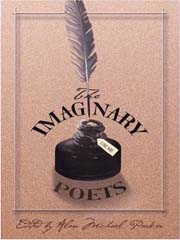 Is a poet we read in translation in some sense a fake poet, or a poet made up by her translators, or an artifact, for us, of our assumptions about her culture? What do poets get, and what do poets need, from explorations in distant cultures, where assumptions about what poems can do, how poems get put together, and how the life of a modern poet should work may look quite unlike prevailing assumptions in Buffalo, Boise, Boston, Brooklyn Heights? Why does literary history include influential poetic hoaxes, from Ossian to Araki Yasusada? Why do hoaxes sometimes bring out the hoaxers' best work? And why have so many American readers and poets (few of whom read Portugese) fallen for the Lisbon modernist Fernando Pessoa, who wrote the great majority of his poems under a panoply of "heteronyms," personae who came with their own biography and their own widely variant styles?

Alan Michael Parker, best-known as a poet (check out Love Song with Motor Vehicles, published by BOA Editions in 2003), has a neat project that might help us answer those questions by showing how each illumines them all: he asked 22 American poets (himself not among them) to make up a poet who wrote in a language not English, write a short biography for that poet, translate one of that poet's (made-up) works, then compose an essay on the translation. Familiar ideas of much-discussed places and times (Holocaust-era Europe, and Vietnam during what's called, there, "the American War") crop up, of course, but so do oddities that give the poets involved permission to do something quite unlike their normal styles of late. Thus Annie Finch has fun with Rose Elbow Souris, a Bulgarian Dadaist; Anna Rabinowitz "translates" long-lined fragments of Egyptian hieroglyphics, preserving their fragmentary formality; and Barbara Hamby's medieval Gertrude of Brandenburg pursues a forceful (if perhaps anachronistic) erotic line.

At times the anachronisms seem not quite conscious, revealing either stereotypes about faraway times, or obsessions of our own: some "versions" have the bland awkwardness of translationese. A skeptical reader might look at made-up poets' bios and see, not what the contributors think original, but what our era in general believes, and may not know that it believes, about Eastern Europe, about ancient Semitic cultures, about Latin American revolutionaries, and so on. Part of the value in Parker's project has to do with the assumptions it reveals. Quick, which national culture would you choose if you wanted a poet who seemed especially ascetic? Especially ecstatic? Especially mysterious? Especially relevant to a recent war?

Yet that's the least of the reasons to check this book out. Here are some better reasons: Readers of Rosanna Warren, who made up the lonely French poet Anne Verveine in prior books of Warren's own, will want to compare the Verveineiana here to other poets' parallel inventions. If you read Flemish or French or Portugese, you'll want to look at the poems "composed" in those languages, and printed in facing-page translation. If you want to see smart meditations in lyrical prose around the absences (historical and post-religious) that haunt modern poems, you'll want to read Mark Strand's essay on the made-up Bulgarian poet Marin K., whose death in wartime echoes that of the real Hungarian poet Miklos Radnoti, and whose damaged corpus of poetry Strand says he chooses not to translate at all. Instead, we get six beautiful paragraphs of Marin K.'s "own" autobiographical prose, followed by Strand's reflections on the whole meta-project of writerly pseudonyms, disguised as reflections on autobiography: "When I noticed in these fragments was Marin's desire to locate himself anywhere but where he was born, and to find an alternative to a banality that he felt was imprisoning." Is that why some of us cotton to pseudonymous poetry? Or is it, simply, why we write and read poems?

If you simply want to see a few good poems in English, one which might stand on their own stripped of the life stories which here provide their contexts, and yet which reflect their roots as fake translations, you will find at least two such poems here: Andrew Hudgins's Alan Lutiy pursues an incessant wordplay—somewhere between late Beckett and Kay Ryan—that suggests the made-up poet's history as a war criminal trying to evade his past—"Away! / wailed the wayward / undissuaded," "Lutiy" says in Hudgins's English: "Always away!" And D. A. Powell's Joao Pudim incorporates our stereotypes about erotic, languid, confusing, coastal Brazil, then gets past them for the playful sadness of a fine sonnet with some of Powell's own prior themes built in: "oh, you could make believe anyone love you / now that the anchor has been pulled / from the coralline bottom of a glassy sea / called mere mer or murmur or hold." Perhaps Powell will discover more poems of Pudim's? If he existed, and Powell had rendered more of him, I'd stand in line for his book.