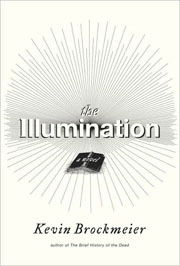 Kevin Brockmeier’s The Illumination takes on a juggernaut of philosophical conundrums: the problem and purpose of suffering. In the world he creates, every person’s source of pain, from paper cuts to pancreatic cancer, suddenly begins to emit light. There is no fanfare to it—it just happens, and people are left with questions of provenance and etiquette and how to incorporate this new information into their reality. However, in true Brockmeier form, this fantastical occurrence is merely the backdrop to the stories of six complex characters who must assimilate the new paradigm into their already pain-ridden lives. These characters don’t know each other, but they are connected by their temporary ownership of a book, a journal of love notes. While light may illuminate their suffering for all to see—and it’s scary how quickly this miracle gets subsumed and commodified into the culture—it is the book that truly illuminates them.

A mixture of observations and insider jokes or stories, the journal is a transcription of daily love notes from husband to wife, diligently transcribed into seven volumes. Patricia Williford has her latest volume with her when she is mortally injured in a car accident with her husband, Jason, but before she dies (believing Jason is already dead), she gives this book to her hospital roommate, Carol Ann Page. From there the book changes hands six times on a circuitous route to its own destruction.

The Willifords’ journal is a strange time capsule, an extremely personal expression that somehow becomes a universal articulation of love, one that is seemingly eternal in its written form and therefore alien to this world. It is a sham, but a sweet, beautiful sham that seduces its readers with an unreal but somehow believable notion of perfect love, a love that none of the other characters have experienced. All of the entries begin the same way, with “I love . . .”:

I love how quietly you speak when you’re catching a cold. I love hearing you tell the cockatoo story to people who don’t know it yet. I love watching you step so carefully inside your footprints when it snows. I love the way you hunt for our names as the movie credits scroll by—“thirteen Jasons and not one Patricia.”

While one might easily expect a religious slant to the illumination of wounds, Brockmeier uses this trope to highlight an entirely different aspect of human nature: our deep attraction to pain. Carol Ann Page’s severed thumb tip starts off the litany of wounds, and the light emanating from it serves to highlight her fascination, “testing it a dozen times a day.” Jason Williford, Patricia’s husband and survivor of the car wreck, also grew intimate with his pain: “Whenever he felt it diminishing, a brief feeling of regret settled over him.” The pain is a way to escape the devastation of losing his wife. “The agony was nearly indistinguishable from bliss,” he says of provoking his wounds. Physical pain becomes inextricably mired in memory and nostalgia; any mercurial moments of happiness is a gateway to self pity. “The world was unreliable. The world could turn on a dime. It was a joy to be alive when it was a joy to be alive, and it was a terror to be alive when it wasn’t,” thinks Carol.

For Chuck Carter, the third owner of the book, “the strangeness of people went on and on and on.” Chuck is a young boy who suffers abuse at the hand of his father (or “pretend dad” as Chuck refers to him) and bullies at school, and he can see and empathize with the illuminating pain of objects. He steals the book because it is shining bright with pain, and he wants to “heal” it, however he fails miserably and decides to pass it on to Ryan Shifrin, a door-to-door evangelist passing out leaflets in the neighborhood. Shifrin invites religious speculation about the Illumination; fortunately he is not a fundamentalist, but his mission work has taken him all over the world and allowed him to experience incredible suffering and loss. “Was it possible for God to sin?” he wonders near the end of his life. Shifrin leaves the book in a hotel nightstand for Nina Poggione to find, an author on a book tour whose mouth sores make it excruciating for her to talk. Nina incorporates the find into her own work, a short story she reads entitled “A Fable for the Living” (which Brockmeier later published in the literary journal Electric Literature). The fated book finally winds up with a homeless man, Morse Putnam Strawbridge, who is “fascinated yet vexed by the book. . . . He did not understand how something so sweet, so earnest and candid, could also be so wayward and enigmatic.”

There are no answers really. In a sense, The Illumination could go on and on, from story to story, following trajectories of the pain that we inflict on ourselves and others, with no end in sight. “Everyone had his own portion of pain to carry. At first, when you were young, you imposed it on yourself. Then, when you were older, the world stepped in to impose it for you. You might be given a few years of rest between the pain you caused yourself and the pain the world made you suffer, but only a few, and only if you were lucky.” However grim this assessment is, made by the grieving Jason Williford, the philosophical paradox of pain may be likened to Wallace Stevens’s lines from “Sunday Morning”: “Death is the mother of beauty; hence from her, / Alone, shall come fulfillment to our dreams / And our desires.” Pain is the condition of living in this flawed but beautiful world. In compassionate and candid prose, Brockmeier provides a lyrical entrée to these profound and complex questions of human existence.