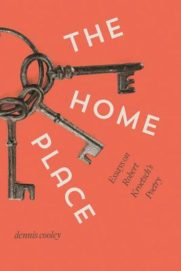 In the post-factual Americas, we play roles in a lunatic’s epic, a demented history of spaces beyond or outside recall. Narrative’s plasticity disfigures personal and public boundaries. Distant and scrolled, the “news” strains credulity. Who owns the story? Who owns the portals, anchor, and cables? Recovery of story is essential to knowing who we are and were.

The Home Place, Dennis Cooley’s recollective exploration of the long poems of western Canadian poet Robert Kroetsch is a solid point of departure in this act of recovery. Riding the impulse of “local epic,” Kroetsch’s work chronicles not only his native prairie, but also the distinct shifts that propelled poetries in the Americas in the late twentieth century. What emerges is a new and redeeming sense of “place” in its mythic, social, ecological, and linguistic energies. As Kroetsch writes, “in the prairies the small town and the farm are no longer real places, they are dreamed places . . . a remembered condition, an explanation of where we come from, a myth.” How does the poet speak from these margins?

Kroetsch argues that “too many Canadian writers . . .” treat language “like a heap of fresh bear shit.” The prairie’s central reality for him was “dislodging”—neighbors whom Kroetsch had seen turned out of their homes in the 1930s. His work searches for the voices gone in “lost or usurped home surfaces.” Recovered as local, “our genealogies are the narratives of a discontent with a history that lied to us, violated us, erased us even.” In Cooley’s analysis, Kroetsch in his long poems is engaged with both recovering that past as well as finding how to retell it. Cooley writes, “Is he inventing, or is he recording here? . . . He was a fierce regionalist but he also was immersed in formal innovation . . . As a regionalist he understood that language gestures to the world, that it can tie us to the world, and that it is profoundly social. As a postmodernist he realized that those connections are profoundly unstable. . .” The “local” rediscovered through a deeper engagement with the stories that turn around it.

Seed Catalogue, which Kroetsch published in 1977, is found poetry, a catalogue unearthed by the poet a few years earlier. Among its entries from the marketed and promised “summer garden” is a list of absences, what’s disappeared from the prairie—most notably for Cooley, “the mysterious hand that hovers over the market place.” Relentlessly local, the poet recollects himself among tales told in bars, at work, and across kitchen tables. The poem works from “the outward, the vernacular, the low and local.” As Cooley notes, “Gone are the troubadours; the jokesters have come to take over. . . . The bullshitters speak the language, the poet listens.” Here, Kroetsch gathers the voices on the margins to reclaim that place. For Cooley, the poet “writes his way home.”

Kroetsch speaks from the provinces; “The margin speaks its one small change against the design of the center, and on that speaking everything turns.” His “catalogue” is a sweeping account, one that forces us within and beyond ourselves. Reminding us that no real boundaries exist or remain between Canadian prairie, American West, and Mexican North, the poems’ conversations with that cold distance reacquaint us with maps, both defining and strange. Cooley’s reflections on Kroetsch are warm, complete, and vital.