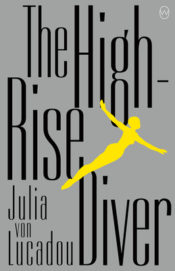 The High-Rise Diver by Julia von Lucadou describes the world of today from an inevitable future, evoking a city deeply entrenched in surveillance, social media, and influencer culture. In this future, children are selected through trials to participate in different career and life paths. There is a periphery of the city, cut off from resources, and a center where the privileged live according to a hyper-monetized logic of surveillance and performance. Against this backdrop we meet two young women, Hitomi and Riva.

Hitomi is a psychologist who specializes in emergency interventions. She is contracted by the sport agency to bring Riva, a high-rise diver, back to her fans. Hitomi prides herself on a methodical and unflinching commitment to leaving her emotions outside her work. But her job becomes personal as she watches Riva all day through high-definition camera feeds, planning strategies for counsel and intervention.

Riva, a professional athlete, has lost the will to compete and thereby participate in the soap opera of her life as an athlete and influencer. Her sport is one of the most popular entertainments in this fictional universe: “When you open your eyes, the woman is diving headfirst from the skyscraper roof. At first you’re scared. Your body tenses up as if it were falling beside her. But then you see the diver as a bird in flight. You feel her absolute certainty that she will be able to withstand the fall.” Riva was raised within the sport and found her place there, a dream scenario, as an artist: “She’s creative. She’s not one of those divers who only perfects the standard forms. . . . Perfectionism is not a compliment. No one wants to admit it, but it’s true. What counts is creation.”

But Riva has decided to leave that world behind. She spends her time alone in her luxury loft with her partner, Aston, unspeaking. “The most popular internet conspiracy about Riva’s resignation is that it has to do with relationship drama, that Riva left Aston for someone else and that he’s now forcing her to stay with him against her will,” the author tells us. Of course, this drama is simply another symptom of why Riva has lost the will to participate.

A recent New Yorker article noted that three out of four workers identify as experiencing burnout, characterized by “exhaustion, cynicism, and loss of efficacy.” In the future of The High-Rise Diver, however, “Burnout is not a valid diagnosis. Ms. Karnovsky has completed various happiness and resilience trainings as part of her training program, far more than those recommended by the health authorities. The academy implements a rigorous mindfulness program. . . . Your diagnosis is obsolete and plain illogical.”

Julia von Lucadou captures the fragmentation of culture towards consumer choice and magnifies it, illustrating the sadness of this fragmentation. Nostalgia becomes irresistible as social media influencers adopt the lenses of archaic media to capture stories that they never experienced. This feels all the more prescient in 2021, as the collective desire for an Endless Summer takes hold. This tendency, like the manufactured memories in Ridley Scott’s Blade Runner, persists across the techno-consumerist morass of a life lived through fragmented media streams, social media personae, and flickering DMs.

Not a cranky luddite manifesto, The High-Rise Diver is a clear and clamoring warning bell, a classic Zen koan kick in the head. Beautiful and strange and scary, the book is a call to stick our heads above the water and breathe fresh air.