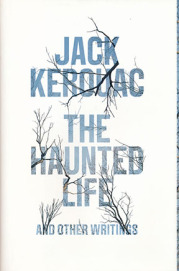 Legend has it that in 1944, a young Jack Kerouac left his handwritten manuscript The Haunted Life in a taxicab, forever lost to the tides of time and fortune. However, in 2002, the manuscript resurfaced and now, finally, is being published in The Haunted Life and Other Writings. In addition to the title story—which actually appears to be a fragment of a larger work that became The Town and the City, Kerouac’s first novel—The Haunted Life collects a variety of texts including prose sketches, letters from Kerouac’s father, and some of Kerouac’s diary entries.

As with other recently published “lost works” by Kerouac, The Haunted Life is of more interest as a historical document than as literature. The book’s editor, Todd F. Tietchen, tells us that the collection reveals Kerouac’s creative process at an important moment in his career. It allows one to diagnose what Tietchen calls Kerouac’s “impulse to record—to submit memory to print,” a “compulsion,” he claims, that “seems driven by the author’s keen awareness of the transience of existence” and his need to lay what has been lost to rest. “Nevertheless,” Tietchen concludes, “much of Kerouac’s work continues to revolve around its originating sense of loss, as if the act of recalling or commemorating can never fully liberate him from the things being recalled. . . . Kerouac remains haunted and seems unable to resist the impulse to ‘remind others.’”

It is, in fact, Kerouac’s dissatisfaction with his writing that gives The Haunted Life its pulse. Aware that the rapid pace of change brought about by World War II demanded new social forms, Kerouac intuits that it would also require new literary forms, the old forms no longer suitable to the times. In a piece titled “Typing Exercise,” he laments, “I shall combine Symbolism with Naturalism in Galloway—but to take myself at nineteen, and that dreary provincial town, and make a work of art out of it commensurate with the liveliness and intelligence I want to achieve, that indeed seems impossible, and a boresome task without even the fruit of my own satisfaction. Poo!”

It seems that the new form Kerouac came up with after The Town and the City, the more elastic, spontaneous form of On the Road, was meant to exorcise what Tietchen claims haunted him. With that new form, rather than try to recapture what has gone, Kerouac turned his attention to the flame of the present, the very engine of life’s transience, the past as it is manifested in the present through the act of remembering. In The Haunted Life, Kerouac still did what was “boresome,” so it haunted him. But if life is haunted by change, the structures he employs in The Haunted Life too are ghosts, dead but still here, oblivious to the fact that they’re no longer alive.