A prolific writer of poetry, nonfiction, and fiction, Jim Harrison is undoubtedly best known for the last of these. The recent, almost concurrent publication of his poems, Songs of Unreason, and of his novel, The Great Leader, is a convenient occasion to consider them side by side. While the boundary between these literary genres is more or less porous, when one writer writes equally well in more than one genre it raises an interesting question: does the author’s sensibility predominate, or does the form—or, if that is too difficult to discern, how do the sensibility and the form correlate? 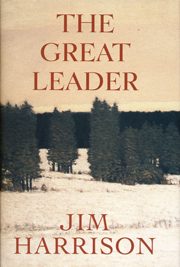 Harrison’s new novel takes the form of detective fiction, which the main character dismisses as “those childish recipe books of mayhem.” Sunderson, a grizzled detective in the Upper Peninsula of Michigan, retires from the force but wants, unofficially, to pursue one last case. A man known as the Great Leader heads a quasi-religious cult of well-heeled followers, whose money he demands and whose underage daughters he has sex with. The trail leads from Michigan to Arizona to Nebraska and back. Instead of catching the criminal, a convenient accident happens, which ends the book with a fizzle.

Like most of Harrison’s protagonists, Sunderson is a real piece of work. A self-described geezer, divorced, a booklover and history buff, obsessed with brook trout, in awe of birds, he hates snowmobiles and likes classical music and renaissance art, and is passionately attuned to Native American history and culture. Maybe most importantly of all—and again typically—he has an insatiable appetite for good food, alcohol, and sex. Sunderson’s creator is all of this (except for divorced) and more.

Even though they lapsed into schtick years ago, Harrison’s novels have remained accessible and entertaining with their crazy yet predictable mix of coarse and delicate, vulgar and sophisticated, ugly and beautiful, sensual and intellectual, all in familiar landscapes. Increasingly, however, Harrison seems frozen in an adolescent fantasy, something akin to “Wayne’s World”: guys spewing grandiose observations and relentless inanities, showing inordinate self-regard, and experiencing a “Schwing!”—Sunderson’s corresponding term is “nut buzz” (with variations)—whenever a “total babe” appears (even in their thoughts).

In The Great Leader Harrison takes this predilection one step further, and seems to dig in. Consider the second most important character, Mona. She is sixteen, a goth, a “world-class hacker,” beautiful, wounded by sexual abuse (Lisbeth Salander, anyone?), and improbably articulate and thoughtful. Sunderson sees nothing especially inappropriate about looking at her naked and being her substitute father at the same time. “To peek or not to peek, that was the question.” She repeatedly catches him, but it turns out she likes it. “I don’t think you’re a pervert,” she says. “You’re the best friend I have.” At one point, Sunderson describes how Mona hugged him, and then he “slid his hand down onto her bottom,” they kissed “and he backed his tongue away from her emerging tongue.” He’s inordinately proud of his restraint, as though that makes all the difference.

All the women in this book are, sooner or later, willing recipients of this priapic retiree’s sexual attention, whether he’s following an unknown female in a grocery store or dropping a fork to look up another’s skirt. He doesn’t blame himself, but rather the biological imperative: you know, boys will (always) be boys. Even as he is caught in that powerful grip, at the same time he is like a god or a king.

So too the Great Leader. Sunderson thinks: “He certainly is an effective predator. I’m a bit mystified by his interest in females that are too young.” In the interest of research, he starts Lolita but finds it “nearly unreadable,” given the “perverted nitwit bapping a thirteen-year-old girl and covering up his crime with layers of intricate thought and language.” Sunderson is oblivious to his own convoluted cover-up, convinced that his behavior is on the right side of the line. The Great Leader is a pedophile; Sunderson is a small step away from that, and a predator as well. What is most disturbing about this novel is that instead of focusing on their overlap, Harrison plays up their differences. Although he quotes Arendt on the “banality of evil,” again and again Sunderson fails to connect the dots. His own foibles are just so much harmless mischief. Even Mona the sixteen-year-old declares: “I’m a big girl not one of those kids King David is fucking with.” The self-delusions and rationalizations extend from the characters to the author, as Harrison gives himself a pass.

Bizarrely, the story ends with a kind of reunion with his ex-wife, and they serve as Mona’s parents. “They would never be the kind of family that would live under one roof but they would be close.” Moralizing aside (even though Harrison invites it), from a literary standpoint this is the kind of conclusion that fiction allows even while it is positively unbelievable. 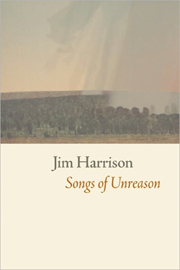 The sheer self-indulgence evident in Harrison’s prose has less room to spread and to feed on itself in his poetry. Songs of Unreason is far more beautiful, complex, and compelling. It is not driven by character or story, as his fiction invariably is, but by psychological necessity, which takes us to a deeper level than The Great Leader ever could.

This is humanist verse, with obvious debts to Rilke, Whitman, Lorca, Paz, Issa, Neruda, and others. Nothing is excluded as subject matter, yet Harrison’s bruised consciousness inevitably circles back to considerations of outer and inner, action and reflection, culture and nature. “Chatter” begins:

Back on the blue chair before the green studio
I’m keeping track of the outside world
rather than the inside where my brain seethes
in its usual mischief. Like many poets
I’m part blackbird and part red squirrel
and my brain chatters, shrieks, and whistles
but outside it tends to get real quiet

Axioms abound. “You carry with you all the places you’ve ever been.” “The world is not what we thought it was.” “It is life’s work to recognize the mystery / of the obvious.”

Harrison grapples with and broods over life and death. He says, “In the loveliest landscape / the tinge of death. . . is in the air.” Metaphors for death include night, a thunderstorm and an “invisible / lion not stalking but simply waiting, the solution / of the mystery I don’t want to solve.” The statement, “In age we tilt toward home,” logically leads to the oldest metaphor encompassing both existence and non-existence: water. “Out of almost nothing, for practical / purposes nothing, then back as ancient / children to the great nothing again, / the song of man and water moving to the ocean.” Wonder and gratitude are not far from this awareness of death. From “Debtors”:

. . . I’m alive wondering whom I owe
for this indisputable gift of existence.
Of course time is running out. It always
has been a creek heading east, the freight
of water with its surprising heaviness
following the slant of land, its destiny.
What is lovelier than a creek or riverine thicket?

The novelty of this book is the long poem, “Suite of Unreason,” which appears sans serif, on verso, opposite the individually titled poems. But it also reads like a series of short poems, similar to those in After Ikkyu. For example: “The violent wind. / The violent wind. / The violent wind.” Or: “The day was so dulcet and beautiful / I could think about nothing. / I lost my head.” The juxtaposition of the paired poems is effective and pleasing, whether or not the correspondence is always clear.

“Unreason” in the book’s title points to another main concern. Rather than pursuing T.S. Eliot’s raid on the inarticulate, Harrison just lets it be. The big questions are unanswerable, at least in words. Water helps: “The only answer I’ve found is the moving / water whose music is without a single lyric.” Animals also figure in here. “The Great Mother has no ears and hallelujah / is the most impossible word in the language. / I can only say it to birds, fish, and dogs.” “A Puzzle” begins:

I see today that everyone on earth
wants the answer to the same question
but none has the language to ask it.
The inconceivable is clearly the inconceivable.
Bum mutter, teethchatter, brain flotsam,
we float up from our own depths
to the sky not the heavens, an invention
of the murderers. Dogs know the answer
by never asking the question but can’t advise us.

It ends: “Words are moving water—muddy, clear, or both.”

Harrison, as if to absolve himself, twice uses Thomas Merton’s phrase, “birds of appetite”: “flitting here and there singing about sex and food, / the girl bending over with her impossible target, / or will it be foie gras or bologna and mayo?” It’s biology again. “There is a human wildness held beneath the skin / that finds all barriers brutishly unbearable.” In “Greed” he mentions not only his wife and daughters, but also lovers, his memory of a sexy aunt, and his hope “that the wind will blow harder up the girl’s / summer dress.” It’s a glimpse of his novelistic world. But akin to his earthiness, his groundedness is plain in the poem “Brutish”: “The shit of the world has to be taken / care of every day. You have to choose / your part after you take care of the shit. / I’ve chosen birds and fish, the creatures / whose logic I wish to learn and live.” The unacknowledged problem is that one can lose contact with some of the ethical responsibilities of being human (which seems to be Sunderson’s—and Harrison’s—main shortcoming in The Great Leader).

Throughout most of his career, Harrison has maintained a workable equilibrium between the lyrical and the narrative. As The Great Leader leans toward the genre-end of the fiction spectrum, he seems to lose his bearings to some degree. Or maybe it’s just his way of dealing with “the shit of the world.” Meanwhile, Songs of Unreason treats the oldest of poetic and philosophical subjects, the lyrical form bringing out what we can only take as Harrison’s core sensibility. He sits alongside Heraclitus, there on his bank of sand, viewing “all this impermanence and suffering” and watching the river flow. “Only the water is safe,” he writes, the dangers and mayhem averted or avoided, at least for now.