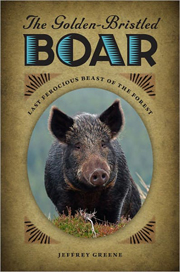 On a mild winter afternoon, a friend and I are returning at dusk from a walk in the country outlying a village in central Italy. The road skirts the rim of a gorge separating us from the village. To the left rises a tall ridge, behind which fields and oak groves stretch on for miles to thickly wooded slopes. Preceding me by a few yards, my companion has just disappeared around the bend when a thundering of hooves and a tearing of branches bursts down upon us from over the ridge.

Alarmed, I step up my pace to see what’s causing the ruckus, and coming round the curve, am just in time to see a huge black shape leap from the road and hurtle down into the gorge. I stop dead in my tracks, dazed by this vision that has left a feral tang in the air. All I saw was a blur, but my friend has seen—and almost collided with—a wild boar on the gallop.

These incursions of the wild and archaic into our 21st-century lives are at the heart of The Golden-Bristled Boar, part nature study, cultural enquiry, and personal history by award-winning poet Jeffrey Greene, an American expatriate who lives in France. Greene’s delightful first memoir, French Spirits (Harper Perennial, 2003), told the story of how he came to buy and restore a very unusual home: an 18th-century presbytery in rural Burgundy. In this new book, he sets out to explore in-depth just one aspect of La France Profonde where he makes his home: a passion for wild boars, a “tribe” that shares his territory, flourishing “in implausible obscurity, given its size, numbers, and vast distribution,” emissaries of the wild on a “continent devoid of wilderness.”

It all begins when a neighbor gives Greene and his wife, Mary, a chunk of wild boar meat that sends them on a search for recipes. Although well aware of the presence of boars in the woods surrounding his village and their use in rustic cuisine, Greene knew very little about the living animal from which this piece of flesh had come. Soon insomniac nights find him rising from his bed, throwing a coat over his pajamas, and driving out to isolated areas where he crouches in damp thickets for hours, waiting to spot a pack of boars, known in French as a compagnie. Through this unusual occupation he learns “a pleasant Zen-like way out of self-absorption into the act of noticing.” His newfound passion, or perhaps obsession, is shared by Mary who joins him in this ritual act of attention, hoping to glimpse a few cuddly piglets or a solitary adult frolicking in mud under the moon.

Greene’s pursuit of boars takes him from France to Tuscany, Sardinia, Corsica, and the American south, where he seeks to investigate their anatomy and habits, their presence in art and mythology, and their use in haute cuisine. He talks to naturalists, researchers, hunters, chefs, museum curators. Among the many characters whom he meets on his quest are a local nature artist and an autodidact historian of local lore, whose homes are shrines to the genius loci, cluttered with boar skulls, fossils, artifacts, signs of the human and animal presences inscribed in the land. Modern geographers would call this collecting of local artifacts deep mapping: the assembling of all information available about a small square of territory. Deep maps lay bare the soul of a place by revealing the stratifications of its natural and cultural history, charting the lives, natural cycles, and stories intersecting there. In a way, The Golden-Bristled Boar, along with Greene’s entire oeuvre, is an act intent on deep mapping his adopted home.

Like creatures from a netherworld mirror-imaging our own, boars sleep during the day in barrows hidden in the underbrush, venturing out at twilight to reclaim our woods, fields, and lawns. Boar society is matriarchal: the oldest sow leads the pack. Adult males roam the woods alone, or sometimes with a young male friend. People and boars don’t mix easily except in circumstances perilous to both—on the hunting ground usually, or the highway, where they can cause dreadful accidents. And as legend claims since Adonis bled to death after being gored in the thigh, it can be very, very dangerous to confront an adult boar. Greene explains the physiological reason for that: it has to do with the curvature of their tusks, once described by poet Robinson Jeffers as “long, naked knives in their jaw.” Animals, said James Hillman, teach us about ourselves. They appear in our oldest myths and in our dreams as wily tricksters, revered enemies, images of beauty and power. We recognize our own instincts in their behavior; they remind us of what it meant to be at one with our environment. In more primitive societies, Greene’s fascination for boars might have been interpreted as an undeniable sign that he had found—and been recognized by—his totem.

Near the end of the book, Greene meets his totem eye to eye in a thrilling encounter of mythic resonance recounted in luscious prose: “I had blundered rudely into a boar’s lair. In a moment, a veering beast and startled man met at the threshold of darkness and inner shock. Suddenly nothing was neutral, not the black trees, frigid lake, or sentient moon. We had almost touched.” This book is really about the ways in which fragments of our environment splinter off into our imagination where like seeds they may grow into myths, dreams, poems, or passions connecting us to matrix from which they sprang. Jeffrey Greene urges us to take the time to investigate our living space where our own totems are surely hiding, waiting to be recognized if only we too can learn to temper our self- absorption with a little patience.