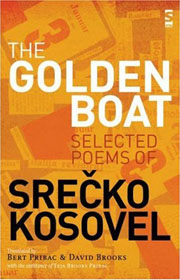 translated by Bert Pribac and David Brooks with the assistance of Teja Pribac
Salt Publishing ($20.82)

Revered in Slovenia as an essential modernist figure and a formative avant-garde poet, Srečko Kosovel died in 1926 at the young age of twenty-two. A prolific writer, it is said that Kosovel wrote over a thousand poems, although few of those poems were published during his lifetime. Often called the Slovenian Rimbaud, comparisons are also made to Rilke and Lorca, and Kosovel deserves a place among these men—as can be seen in The Golden Boat, the most comprehensive selection of Kosovel’s poetry available outside of the Slovenian language.

English language readers will find in these poems the firsthand accounts of a historically relevant European voice interwoven with the metaphysical sensibilities and tender poignancy of a young poet. Take, for example, “The Sun, Nada”:

The sun,
Nada, has set already,
as if hiding
from my eyes.
The sun
has sunk beyond the grove
and all is silent in the wood.
All? I don’t know!
It’s just that the shadows stare
mournfully,
the flowers breathe out their fragrance
in the dusk.
You can feel the tulips bleeding.
I could weep but I am not allowed.

Kosovel’s poems also show us the pessimism of a young European experiencing the turbulence of a new century, as in “This Horrible Time”:

This horrible, unsettling time
is flooding our search with disquietude—
in every direction, every direction,
breaking and killing our dreams.
Crime—Sacrament, the sacrament is a crime,
suffering attached to love,
the heart’s old temples plundered
as if they were damned.
From dead and abandoned dwellings
grey, desperate prayers are sailing—
European man, half-dead,
calling for salvation . . .

The Golden Boat also chronicles Slovenia’s vulnerable position at the geographical and political crossroads of the collapsing Austro-Hungarian Empire. For many Slovenian writers, including Kosovel, literature was not only a form of artistic expression but also a way to preserve and define a threatened society. In this context, the struggle for a cultural identity becomes equal to the poet’s metaphysical concerns. In poems such as “Autumn Quiet,” Kosovel often oscillates between the expectations of cultural definition and his developing sense of self:

It is quiet as autumn inside me
and outside. Beautiful
as far as I can think.

A big job awaits me.
Isn’t that joyful?

I am not striving
for an honorary award
in the society of man,
just for
a world of beauty
and justice.

What is joy?
The wish to live.
The joy of life.
Who care for awards!

I am a step closer to life
in which I must make
my mark.

As we see in “Autumn Quiet,” cultural place and self-knowledge are interrelated; for Kosovel, they must be elucidated in tandem. Along with the informative postscripts found throughout these selections, we are given access to Kosovel’s highly attuned emotional and intellectual sensibilities as he defines his political, cultural, and spiritual existence.

Kosovel’s poems are intoxicatingly honest, and the skillfully cadenced translations that comprise The Golden Boat allow us the opportunity to experience the tender curiosities and melancholies of a poet who was not given much time to understand his place in the world. These lucid meditations show us Kosovel’s intense appreciation for the natural surroundings of his native Karst region. We also find in these poems the sincere longing for quietude, which is not to say utopia; utopia would be too forthright. Beyond the compelling emotional ferocity of the young poet, there is a vulnerable tone in these poems, and that tone conveys a young man’s yearning for peace, not bliss. The Golden Boat illuminates that difference.