Mary Ann Caws titled her latest book Glorious Eccentrics (Palgrave, $35), in honor of the seven women artists of the late nineteenth and early twentieth centuries she profiles within its pages. Caws maintains that for her the term eccentric is “an approbation rather than a criticism” and “the very opposite of pejorative.” Eccentricity is a key to survival for these women, a trait that, when combined with particular forms of genius, sustains their ability to live the lives they chose in societies that were not always hospitable to such choices. 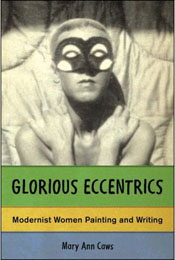 The women whose lives and work are portrayed and celebrated in Glorious Eccentrics are not all well known today, though their lives intersected those of more celebrated artists. Judith Gautier was the daughter of Théophile Gautier, a likely mistress of Victor Hugo, and a muse of Richard Wagner; she was also a translator of Chinese, a model for artists, and the author of numerous books. Suzanne Valadon was a painter (and trapeze artist) who is now better known as a model for Renoir and Toulouse-Lautrec and the mother of Maurice Utrillo. Dorothy Bussy was Lytton Strachey's sister, the author of an anonymous novel, Olivia (published by Virginia and Leonard Woolf's Hogarth Press), and a noted translator, particularly of André Gide, whom she passionately adored. Emily Carr was a Canadian painter and writer who dressed "like a man" and lived more comfortably with animals than people. Paula Modersohn-Becker lived only to the age of 31, but in that time made over 500 paintings, 700 drawings, and 13 etchings—selling only a few of these works, including two to her good friends Clara Westhoff and Rainer Maria Rilke. Dora Carrington is probably the most famous of the seven women, though her popular fame rests as much on her relationship with Lytton Strachey as with her writing and painting, which is what Caws seeks to reclaim and contextualize. Finally, there is Claude Cahun, born Lucie Renée Mathilde Schwob, a writer, actor, and photographer who lived on the island of Jersey, resisted the Nazis, and was sentenced to death with her lover, Suzanne Malherbe (better known as the French illustrator and designer Marcel Moore), though they evaded execution when the island was liberated.

Glorious Eccentrics begins with a preface titled "This is Personal: My Grandmother a Painter" that offers a sensitive meditation on her grandmother's legacy—the legacy of a woman who left the South for Paris, then later Bremen, Germany (where she met Rilke and Otto Modersohn), and finally returned to North Carolina. It is through her grandmother that Caws began to celebrate eccentricity, “a way of life or love or work deliberately chosen instead of given,” and not only vivid eccentricities, but the quiet and interior ones that may go unremarked by history, yet are just as vital to the preservation and propagation of humanity.

Mary Ann Caws is Distinguished Professor of Comparative Literature, English, and French at the Graduate School of the City University of New York, with particular interest in works of 20th-century avant-gardes, Surrealism, and such artists as Robert Motherwell, Joseph Cornell, and Pablo Picasso. Among the many books she has written or edited are Joseph Cornell’s Theater of the Mind; Picasso’s Weeping Woman: The Life and Art of Dora Maar; The Surrealist Look: An Erotics of Encounter; Manifesto: A Century of Isms; and three books in the Overlook Illustrated Lives series: Virginia Woolf, Marcel Proust, and Henry James.

MATTHEW CHENEY: At what point did you settle on this group of women to write about? When did you realize that their eccentricities united them?

MARY ANN CAWS: Originally there were twenty-one eccentric women creators I cared about—from the beginning it was their special, and even bizarre, way of living and working that impassioned me. But I didn't want the famous ones like Frida Kahlo, because there was already so much known about her.

MC: Reading through the book, I wondered if something in particular about the Modernist period required or encouraged these women to live their lives as they did.

MAC: Modernism, it seems to me, gives you both the impulse and the moment to do a great deal of questioning—and is it not the questioning of the world around you and what you specifically can do in relation to and against it, that kind of freewheeling asking of yourself and your surroundings, that sets Modernism, as we know it, apart?

MC: Do you think that the questioning impulse within Modernism was different in any way between women and men?

MAC: Yes, I think women are better questioners, and self-questioners.

MC: Suzanne Valadon was dismissive of critics and even the idea of criticism, as were many of the other women. Do you think this was an attitude they needed so they could survive as (eccentric) artists—or is criticism inherently anti-eccentric?

MAC: Yes, the refusal to consider as vital the judgment of the outside world is essential to one's living as what one wants to live as; I suppose it is the outside world and its relation to the inside world that is always at issue—thus my stress on the “interior eccentric.” I work as a critic of literature and art, and believe criticism to be fundamentally positive in any case. The absorption of it in one's own thinking—with and against—seems to me a positive force for creation.

MC: In discussing the idea of an “interior eccentric,” you say, “A supersensitive strain might be thought to elicit an intensity of emotion and reaction conducive to the intertwining of life and work illustrated here.” How much of the artists’ lives do you think we need to know to understand their work?

MAC: Well, the more the better in general, but on the other hand, some you can get to from the work. I would hate to think that we read Henry James less well from knowing little about his sex life, for example.

MC: Many of the women in Glorious Eccentrics did not limit themselves to one type of art. Even if they are now known for one art in particular, many were both visual artists and writers. Is this a coincidence?

MAC: No, of course not. That is why I picked them, because the interdisciplinarity in which I work as a teacher and lecturer is the point anyway.

MC: Do you feel that interdisciplinarity in art or in academics is inherently eccentric, that is, outside the norm?

MAC: Yes, because most scholars believe that specialization is more serious as the French would say—but I truly like the combination of several things at once. And I believe that each field contributes to the other, in conversation.

MC: Of Virginia Woolf, Vanessa Bell, and Dora Carrington, you write, “That I do not see their lives or art or deaths as tragic, despite the suicides of two of them and the trials all of them suffered, represents a kind of moral choice.” What brought you to make this choice, and how has it influenced your interpretations of these women's lives and work?

MAC: I want to defend a woman creator's intimate choice in all cases. My choice is to defend their choice, since it enabled their work and enhanced their sensitivity to their world. My book is a defense of work as of love.

MC: Again and again these women seemed to have some of their most powerful feelings misunderstood or rejected by men who were important to their lives—Rilke refused to edit the journals and letters of Paula Modersohn-Becker, Gide never got what Dorothy Bussy was doing with her novel Olivia, Lytton Strachey doesn't seem to have fully appreciated Carrington's need for him, etc. Yet many of these relationships were the central ones of these people’s lives. What were the obstacles preventing them from more harmonious friendships with each other, and do you think such harmony would have affected their art?

MAC: Yes, I believe their struggle to be understood and the tragic part of their not being understood is the driving force behind what we might think of as their eccentric choices, which then become positive. That is precisely what I defend.

MC: Eccentricity, at least among these women, often involves eccentric gender performances, whether of women crossing the boundaries of what their societies considered “acceptable” behavior, or more broadly (and perhaps boldly), of women questioning assumptions about gender and sexuality that are still prevalent today. What is the relationship between art, gender, and eccentricity?

MAC: I think that women make better eccentrics in the long run, given the extra effort it already takes to non-conform—and personally I take this in a subjective manner, having been brought up in the South, which gives you a certain skew on things. I wrote a memoir called To the Boathouse, about being a Southerner in New York and the special difficulties of a divorced woman having been taught not to ask questions, always to look around to see “what others are wearing” and doing, and conforming to what is and is not done. So I am in over-the-top admiration of the women who have somehow triumphed over what was expected of them, or, I suppose, what they might have been thought to have expected of themselves, given the way they were brought up. As for the art part, I am above all sensitive to creative impulses—which are not always distinguishable from eccentric impulses—and my grandmother's example as a painter and a gracious wife and hostess was meaningful for me.

That the persons we want to be meaningful to in our turn would prefer we be slightly less "eccentric" in this sense puts an added strain on both the art and the life of it.

Of course, my view of a professor's life, especially a literature professor who also writes and gives lectures elsewhere, colors the view I just stated. Doing a lot probably entails not doing so well always in all parts of one’s life. Fine, for that, too, is part of a freedom we care, or should care, so much about.

MC: What is next for you?

MAC: I am preparing a brief biography of Dali for Critical Lives (Reaktion Press), working on a Picasso and Language catalogue for the Yale Art Gallery, a catalogue of the paintings of Jacqueline Lamba (André Breton’s second wife), an edition and translation of Furor and Mystery of René Char and a small 2X2 Henry James and Edith Wharton comparison for the Feminist Press. And hoping to place my memoir of living and cooking in a “cabanon” in Provence.

MC: In your research and life, have you found any particularly fruitful strategies for preserving and benefiting from glorious eccentricity?

MAC: Yes, the absolute determination to do whatever you are doing intensely and forget the outside world while doing that—and also doing as many things as you feel like doing and skipping the others when you can.