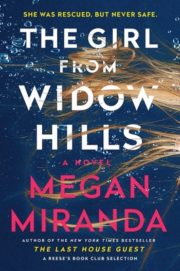 Megan Miranda’s fourth novel for adults is another insightful, literary, and suspenseful mystery, inspired by the story of “Baby Jessica”: Jessica McClure Morales who fell into a well in Texas in 1987 at eighteen months and survived for the fifty-six hours it took to free her. In the novel, Arden Maynor was six when she was swept away by a rainstorm while sleepwalking; she clung to a storm drain and was found alive after three days by passerby Sean Coleman. It was a miracle, they said. Yet each anniversary brought new judgment and new pain—partly because Arden’s mother “was tragic until she was neglectful”—so Arden changed her name to Olivia and kept moving.

Now in her mid-twenties, Arden lives in shiny Central Valley, Kentucky, a place that “required more of an active process. It attracted a certain type of person, outdoorsy and weatherproof. Who would trade convenience for adventure. Stability for curiosity." She moved there with her boyfriend and liked the fresh-start feeling of the town, but recently she can’t help but think “that all of us were really only one degree from the start of a slide. Something that worms its way inside and refuses to release you. A simple thing at first, that you can’t ignore and can’t shake. Until it permeates everything. Until you can think only in terms of this one simple thing—its presence or its absence—driving you slowly mad.” Just before the twentieth anniversary of the defining incident in Arden’s childhood, she wakes up with the corpse of a man from her past at her feet. Detective Rigby is on the case, but it’s one that only Arden can solve, dredging up the ugly truth found in the past.

Megan Miranda is the master of asking what happens if one removes one’s self from one’s own story, of exploring the science of therapy and thumbing through the foggy past. Her regular readers will see shadows of women from her other books, but this plot, even more than the others, contains strong horror elements and a heroine with a shock of silver running through her soul. In this satisfyingly chilling read, Miranda once again envelops readers in dark glimpses of tortured interior lives. She crafts a story more about where you're from than where you're going, and how the truth can be slippery as rain. As Arden states, “you could hold two versions of the truth—and yourself—in your hand at the same time, and both could be completely real.”