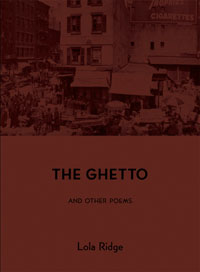 In 1907, at age 34, the poet Lola Ridge emigrated from Australia to the U.S. Finding employment in various industrial sweatshop environments, she quickly became involved in both socialist/anarchist/feminist activism and the modernist literary movement, contributing to and editing a number of “little” magazines. The Ghetto and Other Poems, her first book, appeared in 1918 to critical acclaim; as Nancy Berke has noted, her work was admired by major poets including William Carlos Williams and Kenneth Rexroth, and when she died in 1941 she was eulogized by the New York Times as a “leading contemporary poet,” yet for decades her work has been overlooked or forgotten entirely. Thus it is welcome news that Ridge’s first and most important book is once again in print.

Ridge writes of cityscapes and workhouses, the life of the street and indeed the titular ghetto, with a combination of Williams’ “things” and her own particular taste for the necessary human existence—suffering, love, lust, aspiration—that goes with them. That taste lies uneasily behind the most measured of these poems, while in other moments it breaks out rampant, as in “To the American People,” a Lautreamontian exhortation at once inciting the reader and warning of what lies within:

Will you feast with me, American People?
But what have I that shall seem good to you!
On my board are bitter apples
And honey served on thorns,
And in my flagons fluid iron,
Hot from the crucibles.
How should such fare entice you!

Indeed, the spirit of Maldoror roams these pages, surveying the results of the mass industrialization that prophetic Mephistopheles had anticipated with such horror:

All day the power machines
Drone in her ears. . .
All day the fine dust flies
Till throats are parched and itch
And the heat—like a kept corpse—
Fouls to the last corner.

The book swerves from typically modernist free-verse to balladic songs evocative of an apocalyptic Wordsworth, as in “The Song of Iron”:

How golden-hot the ore is
From the cupola spurting,
Tossing the flaming petals
Over the silt and furnace ashz—
Blown leaves, devastating,
Falling about the world. . .

Out of the furnace mouth—
Out of the giant mouth—
The raging, turgid, mouth—
Fall fiery blossoms
Gold with the gold of buttercups
In a field at sunset,
Or huskier gold of dandelions,
Warmed in sun-leavings,
Or changing to the paler hue
At the creamy hearts of primroses.

Amidst such infernal settings, the working poor of the city go about their lives. Ridge peppers the longer poems with a suite of thumbnail portraits, like the piece worker who at night reads “those books that have most unset thought / New-poured and malleable” (clearly either poetry or manifestos, or both). Ridge is at her best when revealing people’s interrelationships to their surroundings, like the woman in “Spring” with “eyes like vacant lots” or the awful “fountain slobbering its stone basin,” drowning out huddled figures in a dim lit square in “Flotsam.”

Rooted in early 20th-century New York City, The Ghetto and other Poems anticipates much of what was to emerge amongst the “objectivists,” apparent in Ridge’s focus on the working poor and their intrinsic role in the composition and machinations of the city. Everywhere the city, its people, and their conditions are conjoined, as in “Faces” where “A late snow beats/ with cold white fists upon the tenements.” The conditions and exploitation of the working poor engaged with in this book carry an intense consciousness of the ongoing Great War and its implications, a tone that tempers every atmosphere in the collection. “The Everlasting Return” captures it best: set in Ancient Greece on a slave ship, when the ship and its owners come under attack the slaves are made half-free, their right hands loosened from their shackles, liberated just enough to defend their masters.