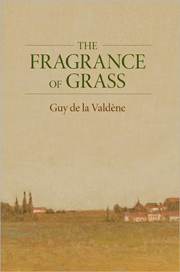 Guy de la Valdène is a remnant of what he prefers to call the "sporting life." This means something distinct from the hunting La Valdène observes in his old age, something that hearkens back to a certain nobility in the endeavor that he imbibed in his youth, and his memoir The Fragrance of Grass takes pains to make the distinction.

Born to a life of inherited luxury among the hunting preserves and estates of Normandy, La Valdène has spent the fifty years since his adolescence—when he first took hold of a gun—plotting and executing a long and varied succession of hunts. He trails game across Europe and America, in the far north and the deep south. He has enjoyed, he admits, a life of "idleness and uncomplicated pleasures, an existence of good fortune and sport, of limited accomplishments and few regrets."

Growing up in a French castle, La Valdène learned the pleasures and demands of hunting from raffish gamekeepers, men who celebrated wine and loud company in equal measures. In apprenticeship the young La Valdène would crouch at dawn in the blind of a remote marsh, waiting for the landing of a migrating flock. Or he would march in a line of nobility through the manicured fields of estates, shotgun held at the ready, as servants in an opposite line flushed game from their hiding places. Through these stations of his youth La Valdène came to admire above all the grey partridge, Perdix perdix. "My sporting life begins and ends with Perdix perdix", he says, and it's that bird he hunts through all these varied landscapes, anticipating its presence on his plate.

And yet, though La Valdène has relished from youth the unique pleasures of shooting to kill, he enters his seventh decade with a feeling of bittersweet ambivalence, a sense of the wrongs of hunting which dogs him on his 800-acre Florida farm. It is this ambivalence that animates The Fragrance of Grass, and rescues its author's memories from the chronicle of killings they threaten to become.

"Hunting introduced me to nature half a century ago," says la Valdène, and with each journey to the wild he returns to "a better, more innocent place". There he experiences an "unqualified delight" in his surroundings, and though this delight produces in him a grumbling that hunting is best made for the killing of wild animals, and not simply ones pen-raised for the purpose, it also wakes in him a reverence for the vistas he finds on climbing remote Montana mountains or driving through the wetlands of Sasketchewan.

This reverence sometimes extends to those animals La Valdène kills. With regret he recounts shooting a deer in Scotland, or a box turtle on his farm, each time swearing off the murder of that particular species in the shame he feels in witnessing their death. "Compassion may be one of the few compensations of growing old", he says. He holds up this compassion like a trophy, turning it this way and that, so that we might inspect it with him, as when he finds a five-foot rattlesnake on his farm:

I no longer enjoy killing snakes or any other animals for no reason. But my dogs are small and if, sometime in the future, that snake bit one of them, the dog would probably die. . . . In its death throes, the snake uncoiled off the ground, one last string of venom spraying out its hollow teeth, the late afternoon light catching the stream and coloring it gold.

Since I now am keenly aware of the inevitability of death, when I kill an animal I understand that I have destroyed a part of myself. To mitigate these recurring misgivings, I now say, "I'm sorry," loudly enough for the dogs to hear, even though I am fully aware they plainly don't care.

La Valdène cares, however, and while his caring may sometimes catch on preference—hunting on foot, he says, is better than from a car, in solitude (or with one or two other men of similar sensibility) is better than in a crowd, with a dog is best of all—it carries to a deeply held gratitude for the moral education he has taken from those preferences. Hunting has brought La Valdène in contact with the wild, natural world, and this contact has fostered in him a love for preserving that world as he has found it. Though, admittedly, he wouldn't mind taking a few partridges out of that world for dinner.

For those who might wish to share in the ecstatic experience of the grey partridge, La Valdène includes a short chapter of recipes, most of them adapted from recipes hailing from the Middle Ages or from La Valdène’s memory of meals made by the chef of his childhood estate. The point, it seems, is to enjoy the finer things in life the proper way. If there is such a simple, identifiable ethos to this singular, evocative memoir, it is this.

La Valdène concedes that his life of leisure has given him a strangely privileged vantage on man’s place in nature. But the strangeness and the privilege, once conceded, do not negate La Valdène’s keen powers of observation, contemplation, and thanksgiving. As long as he feels he must hunt, La Valdène figures he may as well make sure to enjoy it:

From an evolutionary point of view, it is absurd for me to think that I should question man's urge to hunt, an urge that has been imprinted on our DNA for 250,000 years. In time, the inclination will undoubtedly disappear from our genes, but for those of us who still live on the land, hunting is as ordinary as eating or sleeping. The quality of the experience is another matter.