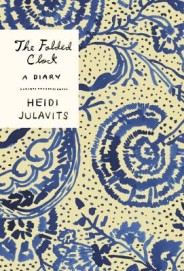 “Often,” as Virginia Woolf observed in a 1929 essay, “nothing tangible remains of a woman’s day.” By nightfall, “the food that has been cooked is eaten”; eventually, even “the children that have been nursed have gone out into the world.” The Folded Clock, a new work by Heidi Julavits, echoes Woolf in its opening query: “Today I wondered What is the worth of a day?” Subtitled A Diary, this luminous piece of life-writing poses possible answers to that question in each of the entries that follow, creating a complex composite portrait of the consciousness that persists amid “soup spills and dirty dishes and lengthy logic proofs meant to coerce tired, inarticulate people to bed.”

On the battlefield of everyday existence, diaries represent a kind of mnemonic triage. Like the household designs of Charles and Ray Eames, which Julavits adores, The Folded Clock performs this function even as it meditates on its own form. The author of four novels and a founding editor of The Believer magazine, she describes herself in these headlong terms: “I edit and teach and at times desire to be a clothing designer or an artist . . . and I write everything except poetry and I am a mother and a social maniac and a misanthrope.”

Julavits’s latest work shores up her memories against life’s rough-and-tumble, detailing semesters at Columbia, summers in Maine, residencies abroad; her marriage to the writer Ben Marcus; her musings on art and aesthetics; the time-lapse photography of her children’s growth. More than a mere calendar of doings or an almanac of emotional squalls, however, this book is an attempt to pin down effervescence, a sketch of the self that has sprung up in the cracks of these roles, occupations, and dreams.

The Folded Clock reproduces the format of her childhood diaries, opening each entry with a deceptively simple “Today I.” As an adult, this formula lends itself to a tone of whimsical deadpan, a habit of presenting off-kilter occurrences as utterly humdrum: “Today I ordered ten toy stethoscopes from a party supply company”; “Today I went to a neighboring town to see the gallery opening of the woman inundated by motherhood”; “Today I started reading a book called How to Navigate Today.” Reminiscent of writers like Miranda July and Sheila Heti, this tone preserves only kissing distance between miraculous and mundane, casting the author as realist observer of a world not quite identical to our own.

For Julavits, “today” functions as a formal conceit, a vault from which, with a gymnast’s agility, she executes temporal and associative leaps. Billed as “an accounting of two years of my life,” The Folded Clock shuffles the deck of days: June abuts March, July follows October, May and January meet. The work that results prefers recurrence to resolution, and its nonlinear timeline may represent an attempt on the author’s part to slip the traces of plot—which she associates with novel-writing, and with which she has lately become disenchanted—in favor of a more episodic mode.

The published journal’s implicit promise is to catch personality ungroomed, before its morning toilette; to provide a warts-and-all portrait of the author in conversation with herself. The Folded Clock bears stronger resemblance to the pianist’s impromptu, a work whose painstaking composition mimics spontaneous, improvised play. Likewise, these entries engineer an intimacy more akin to two confidantes’ tête-à-têtes than a wiretap on another’s thoughts. It’s no accident, perhaps, that the making and maintaining of friends—those most quotidian seductions—play a major role in The Folded Clock: the author’s blend of anecdote, disclosure, and self-deprecation mimics the idiom of a deep but platonic bond.

Julavits is quick to interrogate her own motives for charming us, fretting that, in “trying to be charismatic . . . I probably didn’t tell the truthiest truths.” Perhaps not. By taking full advantage of the formal prerogatives at her disposal, however, she has produced an authenticity rarer and more startling than truth unadorned. Her diary returns at intervals to a male friend’s assertion that, when it comes to intimate partners, “Men want a relationship, but women expect a world.” Readers also require worlds of the books we devour, and The Folded Clock delivers one, fully formed.