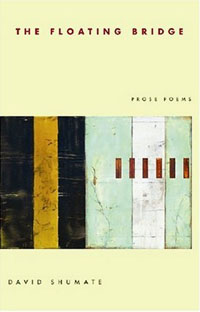 In his recent collection of prose poems, The Floating Bridge, David Shumate explores such diverse subjects as translation, amateur Zen masters, and Franz Kafka’s first date. While his book treats a variety of ideas, the works within it continually return to the idea of “another world” just beyond our own, where one’s most basic assumptions about the social order no longer hold true. Filled with finely crafted narratives and wild flights of the imagination, Shumate’s collection offers readers a range of variations on the prose poem while remaining impressively consistent as a book-length project.

The use of extraordinary settings to structure The Floating Bridge is particularly noteworthy. Beginning with a set of poems entitled “Far Villages,” the works in Shumate’s collection travel from “Babylon” to “Paris” and the “Bible Belt,” at the same time conveying the mythology that surrounds each of these locales. Frequently using the prose poem as a vehicle for contemporary allegories and parables, Shumate explores the sense of otherness that arises as a result of place. In “The Next Village,” for example, he writes:

In the next village the bells ring at all hours. In the middle of the
night when everyone is asleep. At midday when the children huddle
over their studies. In the evening when families bow their heads.
They leave the door to the tower unlocked so anyone can pull
those ropes. When loneliness descends. When love overtakes all.
They feel it is good to let others know.

In this poem, the customs of “the next village” are narrated by an outsider who depicts them as being at once strange and disconcertingly systematic. By creating a speaker who merely observes another civilization’s way of life without partaking in it, Shumate communicates many of the modern dilemmas inherent in globalization, the lack of understanding of other cultures being only one example. “The Next Village,” like other poems in The Floating Bridge, speaks to the contemporary while conveying universal themes, a project that remains thought-provoking throughout.

As the book progresses, Shumate’s use of familiar imagery in constructing the fantastic grows impressive. Frequently using this device to suggest that “The Far Village” and “The Orange Flags of Babylon” may reside merely a few footsteps away, Shumate creates a world in which the everyday is rendered nearly unrecognizable. This trend is particularly apparent in a poem entitled “Lucifer,” in which Shumate conflates the bar scene with biblical stories:

He asks the red-haired woman sitting across from
him if she’s ever thought of being in the movies. The other night
she watched him seduce a Polish girl on the Left Bank with the
same ploy and no one’s seen her since. She leans across the table
and gives him an ironic kiss on the forehead. His skin sizzles at
the touch of her lips. The room falls silent. Even the fly buzzing
above the pasta pauses in midair.

Throughout this passage, the author pairs the sacred with the profane, using this juxtaposition to imbue gravely serious subjects with unanticipated humor. In doing so, Shumate’s prose poem reads almost as a contemporized parable in which present-day pasta and movie stars become part of a spiritual riddle. A wonderful match-up of form and content, “Lucifer,” like other poems in The Floating Bridge, suggests something of the extraordinary in the everyday.