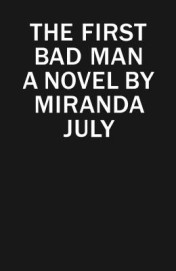 Encountering Miranda July’s art for the first time, whether through her films, stories, or voice, one feels the shock of being challenged and exposed. July now conquers a new creative form—the novel. The First Bad Man displays her strength and particular delicacy, echoing character qualities and themes that will be familiar to July fans. Readers will be absorbed by a story in which all betrayals are as large as the painful ways that we are connected and disconnected from each other.

With poetic and precise prose, July brings to life forty-three-year-old Cheryl Glickman, who lives alone and works for a typically quirky women’s self-defense non-profit in Los Angeles. Cheryl refers to herself as pear-shaped, with neat hair and unremarkable shoes: “the spaces between my features are in perfect proportion to each other. So far no one has noticed this. Also my ears: darling little shells. I wear my hair tucked behind them and try to enter crowded rooms ear-first, walking sideways.” A carefully devised “system” keeps Cheryl’s life in order:

At its best, my system gives me a smoother living experience. My days become dreamlike, no edges anywhere, none of the snags and snafus that life is so famous for. After days and days alone it gets silky to the point where I can’t even feel myself anymore, it’s as if I don’t exist.

Cheryl’s an obsessive, a quality she shares with many of July’s other characters. She’s overcome with the fear of believing in other people, and even in her own life. Her attention is fully focused on seducing Phillip Bettelheim, a self-involved, entitled, immature board member in his sixties; finding Kubelko Bondy, the soul of a baby she knew as a child; and curing a lump in her throat (“Globus hystericus”) through “chromotherapy.” She feels that her romance with Phillip is serious, but he’s mainly interested in flirting and playing a game “imitating crass people” (for example, he’ll unzip her dress at work without permission). But soon Phillip confesses that he’s dating a sixteen-year-old, and via persistent texts asks Cheryl’s permission to perform various sex acts.

Cheryl’s disappointment in Phillip and stifled life are loosened, then shaken free when her bosses insist she work from home and allow their twenty-year-old unemployed daughter Clee to move in. The last time Cheryl saw Clee, “her pale hair was pulled back into a very tight ponytail, lots of eyeliner, big hoop earrings, pants falling down. She looked like she was in a gang.” Still blond, big-boned, and commanding, Clee disturbs Cheryl’s sterile home with dirty shoes, weird smells, frozen dinners, irreverent behavior (“[Clee] was scanning her calves for ingrown hairs and picking them out with her nails”), and eventually, fights. The women begin a sort of “fight club,” reenacting the assaults in episodes of self-defense DVDs. July fans will immediately recognize this hallmark of hers—revealing the fantasy that lies just a scratch below the surface of reality.

Clee provokes and bullies Cheryl, but she merely feels the warm sensation of being chosen. “No one had ever talked to me like this before, so cruelly. And yet so attentively.” And then Cheryl’s hooked; even the bruises fill her with hope. “This was the opposite of getting mugged. I’d been mugged every single day of my life and this was the first day I wasn’t mugged,” she remarks.

When the object of desire in Cheryl’s explicit sexual daydreams transfers from Phillip to Clee, Cheryl’s afraid of alienating her. Instead, Clee becomes pregnant by a mystery man, and seduces Cheryl, who falls deeply in love with her. “Each time the scenery changed we were brand-new all over again,” Cheryl says. “It’s like wearing something beautiful and eating something delicious at the same time, all the time.”

July excels at capturing the fantastical elements of relationships and the sharpness of experience: “On the last day of the month a blanket of heat descended in the middle of the night, waking every living thing and setting them against each other.” She describes crying as “nose and eyes . . . pierced with that beautiful stinging sensation, a million tiny pins, culminating in a giant salty rush.” And she remarks on the thin veil between her protagonist and other characters with telling accuracy: “I walked out of the lobby into the street. The sun was blinding. People were striding past thinking about sandwiches and feeling wronged. Where was I parked? Parking garage.”

Saturated with “exotic revelations,” The First Bad Man serves as naked evidence of July’s belief that loneliness can be cured, at least temporarily, by holding dear all the moments pointing to forever. Showing an intense appreciation for the romance and ridiculous humor of life, even if it is filled with tragedy, this stunning novel presents us with the child we didn’t want to leave behind and the adult we can almost see. It reminds us that there should be many words for “friend” and “love,” and it is pleasantly over-imagined—much like our relationships with ourselves.