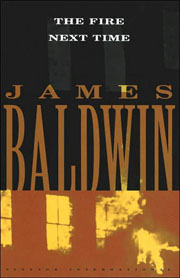 In the afterglow of Barack Obama’s historic victory, it may be instructive to look back on James Baldwin’s slim volume The Fire Next Time, which collects two early 1960s works evaluating race relations in Harlem at the dawn of the civil rights movement. Hard as it may be to believe, Obama is of a completely different generation from Baldwin. He’d scarcely been born when Baldwin wrote the first piece in the collection, “My Dungeon Shook: Letter to My Nephew on the One Hundredth Anniversary of the Emancipation.”

The impetus of the 1962 letter, at least on the face of it, is simple. Baldwin’s nephew, also named James, is hitting puberty and the elder Baldwin has a message: “You can only be destroyed by believing that you really are what the white world calls a nigger. I tell you this because I love you, and please don’t you ever forget it.” In his characteristically evocative, compassionate prose, Baldwin limns the contours of his father’s dreadful life and his brother’s transformation from an enthusiastic young boy into an ineffectual, violent, and bitter man: “I know what the world has done to my brother and how narrowly he has survived it.” He tells his nephew that he was born “to be loved, baby, hard, at once, and forever, to strengthen you against the loveless world. . . . You were born into a society which spelled out with brutal clarity, and in as many ways as possible, that you were a worthless human being.” Despite his rage at seeing his family grow up in a ghetto, Baldwin concludes the letter with a message of perseverance and love. The problem, as he sees it, is that whites are afraid—not of blacks, but of losing their own identity and admitting their own inhumanity and lack of action toward blacks (“It is the innocence which constitutes the crime.”) And so Baldwin urges “that we [blacks], with love, shall force our [white] brothers to see themselves as they are, to cease fleeing from reality and begin to change it.”

This final theme is the thread that runs through the second, much longer letter, “Down at the Cross: Letter from a Region in My Mind.” The essay, which originally appeared in The New Yorker in 1963, is a meandering, remarkable story of Baldwin’s religious upbringing and his (much later) meeting with Elijah Muhammad. As Baldwin tells it, when he hit puberty, he knew he was doomed: “But now, without any warning, the whores and pimps and racketeers on the Avenue had become a personal menace.” He was growing up in the ghetto; he had to do something to avoid the Avenue. That something was the church. He became a child-preacher and gave several sermons a week. It was his “gimmick,” as he says, a way to keep him focused, to give him status, and allow him to gain space from his violent, overbearing father (who, not coincidentally, was a long-standing preacher at a different church). And, most important, it was how he avoided the fate of many of his friends, who fell into drugs and crime as a result of hopelessness and desperation.

Zoom forward nearly twenty years, to the early 1960s. Baldwin is now a literary giant, famous enough that the Honorable Elijah Muhammad, leader of the Nation of Islam, wants to have an audience with him. Baldwin is curious: Why has a doctrine of black supremacy and independence become viable? What distinguishes Muhammad from the scores of soapbox preachers standing on the corners of Harlem during Baldwin’s youth? The visit takes place on the South Side of Chicago; the scene is like that of a gangster movie, or a Kafka novel. Baldwin enters a house and there’s a sitting room with eight men and six women. The women sit on one side and the men on the other. There’s small talk, discussion of “white devils,” a wait for the leader. When Muhammad shows up, he’s mesmerizing in a quiet way: “I knew what he made me feel, how I was drawn toward his peculiar authority, how his smile promised to take the burden of my life off my shoulders.” The group sits down for dinner and it becomes clear Muhammad’s followers are sycophants. A ceaseless chorus of “Yes, that’s right” ensues, along with non-stop talk of the imminent destruction of “the white devils” and the innate glory of “the black race.”

Baldwin can sympathize with Muhammad and his follower’s sentiments:

In a society that is entirely hostile, and, by its nature, seems determined to cut you down—that has cut down so many in the past and cuts down so many every day—it begins to be almost impossible to distinguish a real from a fancied injury. One can very quickly cease to attempt this distinction, and, what is worse, one usually ceases to attempt it without realizing that one has done so. All doormen, for example, and all policemen have by now, for me, become exactly the same, and my style with them is designed simply to intimidate them before they can intimidate me. No doubt I am guilty of some injustice here, but it is irreducible, since I cannot risk assuming that the humanity of these people is more real to them than their uniforms. Most Negroes cannot risk assuming that the humanity of white people is more real to them than their color.

Regardless of Baldwin’s empathy, it turns out to be a dispiriting visit. He declines to make a religious conversion and is then given a car and driver to escort him to his next destination. His evening with the leader of the Nation of Islam is over.

At the end of the essay, Baldwin explicitly rejects Muhammad’s doctrine of hatred. Instead, he asks that sane people, both black and white, band together in an attempt to staunch the cycle of vengeance and hatred he sees forming: “If we—and now I mean the relatively conscious whites and the relatively conscious blacks, who must, like lovers, insist on, or create, the consciousness of the others—do not falter in our duty now, we may be able, handful that we are, to end the racial nightmare, and achieve our country, and change the history of the world.” It is a sentiment not unfitting of Barack Obama—although on the campaign trail Obama would speak of the divisiveness of partisanship rather than race. And here is where the question arises: How far have we come? How far do we need to go? The Fire Next Time speaks eloquently of America’s systematic and structural failure to address its racial injustices in the 1960s. Baldwin understands how it breeds bitterness, ruins lives, and makes people—both white and black—small, petty, and hateful.

Certainly, we’ve come a long way since the 1960s; Barack Obama’s election as president is an astounding achievement. But can we say we’ve now transcended our “racial nightmare”? Clearly, all our nation’s racial problems didn’t vanish overnight. But maybe—just maybe—it’s now merely a matter of how soon various barriers will fall. Meanwhile, it’s important to note that the type of injustice Baldwin brings to light exists on more than a racial plane; he documents the seeds and emotions behind jingoism, classism, xenophobia, and demagoguery, as well as racism, and he makes clear the deep resentments they breed within both perpetrators and victims. Throughout it all, his compassion is boundless—even as he condemns most, he preaches a doctrine of love and resistance. His care, his insight, and his ability to empathize with all sides of the issue are unequivocally relevant today. He is a timeless writer. For that he should be honored and read—in any era.