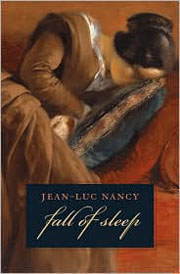 Best known, with his colleague Maurice Blanchot, for his investigation of the political and of “inoperable” community, Jean-Luc Nancy writes philosophy like a poet, one who has rejected metaphysics but not “the soul,” nature, the dream, or the rhapsody of language. His sentences surge like the sea, wavelet breaking on wavelet of meaning, meaning itself generated from the friction of word against word, as salt enters the water through the tumbling of stones. Note how even in translation sound leads to sound, association to association, and metonymy to myth, so that in three lines we understand all that we have lost to the hyper-vigilance of consciousness and the violence of intention:

How to sleep in a world without a lullaby, without a lulling refrain, without a capacity for forgetting, without unconsciousness itself, since Eros and Thanatos patrol everywhere shamelessly, sardonic watchmen armed with whips and cudgels?

According to Nancy’s philosophical hyperbole, we have forgotten how to forget (if we ever knew). Yet we do sometimes sleep. This brief, rich book attempts the impossible by describing that amnesia, through paradox, parsing, and repeating. Paradox because one is, when sleeping, most deeply oneself, relative to nothing else; also one is someone else, the placeholder who substitutes for the absent self; and at the same time one is everyone, dissolved in universal night:

‘Who am I?' disintegrates in the fall of sleep, for this fall carries me toward the absence of questions, toward the unconditional and indubitable affirmation—alien to any system of doubt, to any condition of identification—of a being-in-self that tolerates no unpacking, no analysis of its structure.

I sleep and this I that sleeps can no more say it sleeps than it could say that is it dead. So it is another who sleeps in my place. But so exactly, so perfectly in this, my own place, that he occupies it wholly without overlooking or overflowing even the slightest portion.

Night obstinately brings indifference back into the different; it finds the previous world, the magma, the chaos, the khora, equality posed on itself, the bodies of lovers at the bottom of the sea, the equivalence of hours no longer recorded by the unequal shadow of any sundial and measured only by the constant and arbitrary unit of the falling drop of water, or else the transition of an atom of caesium 133 from state A to state B.

Nancy’s prose illustrates how any discourse continued long enough will contradict itself, and how such contradictions create the seams in the flat fabric of meaning that turn it into a garment, a covering on the invisible, on what Nancy calls “the world of substance” that is night.

Artfully translated by Charlotte Mandel, his essay does not depict any particular dream in the manner of a surrealist image but rather elaborates a surrealist image to suggest the distinct form of awareness we experience in dreams:

. . . we guess the shot was taken using an array of lenses too complicated for its machinery to be dismantled, but whose presence we sense is quite close, a copper and ebony apparatus loaded with enlarging and distorting lenses, magnifying glasses and beveled mirrors, a cinematographic device without motor but endowed with zoom lenses and dollies and booms staked onto each other and moving effortlessly, with no hint of the space in which they move.

Through such flights of imagination Nancy captures the very sensation of dreaming, that “gesture of evanescence with the charm and virtue of presence.”

One cannot talk long about sleep without mentioning death; the title of the book in French puns ontomber (to fall) and tomb. But Nancy says less about being dead (other than the wonderful metathesis, “One could say that sleep is a temporary death, but one could also say that death is necessarily temporary, for it lasts only as long as time lasts”) than about the experience of another’s death. How sad, beautiful, and old world, how safe from the sardonicism and cudgeling of the contemporary mind, is his description of the death-bed vigil: “We watch them leave and we see them left; they fall asleep thus in our eyes as well as in our arms, as in the tomb into whose depths they will never stop vanishing.”