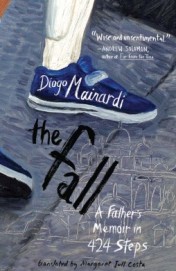 Brazilian journalist and author Diogo Mainardi tells his story in a manner that is sentimental, intellectual, and without bitterness in The Fall: A Father’s Memoir in 424 Steps. The book is written in list format, composed of 424 items that represent the 424 steps the author’s son Tito, who has cerebral palsy, took to see the place of his birth. The winding narrative takes many detours, documenting the beginning of Tito’s life and Mainardi’s relationship with him. Using repetition to build messages about fate and faith, Mainardi has an eye for accuracy while still maintaining a unique narrative voice. Originally written in Portuguese, the words do not always hold the same significance in English that they did in the author’s native language. However, when Mainardi writes, “I am Tito’s father. I exist only because Tito exists,” these words feel universal.

While the list format could seem contrived, Mainardi’s use of the form pairs seamlessly with the content of his story. For example, when Mainardi concisely explains, “The amniotomy performed by Dottoressa F was described by experts as ‘highly inappropriate.’ . . . This in turn caused damage to the brain,” the bluntness of the statement and the shortness of the explanation help the reader understand what has happened without getting bogged down in unnecessary details. The pacing of the memoir is fast, but not rushed.

Mainardi, a world traveler, refers to a number of famous works and people throughout the book from a plethora of different cultures. The most interesting of these are about famous people with connections to cerebral palsy, such as comedian Francesca Martinez, who has the disease, and singer Neil Young, who is the father of two sons with CP. In discussing Young and his struggles, Mainardi explores his relationship with Tito, especially when he talks about Young’s song, “Transformer Man,” which Young wrote about his attempts to communicate with his son. This offers insight into Tito’s life and relationship with his father, and into the author’s difficulty connecting with his son and strategy of celebrating difference instead of yearning for healing.

Although the allusions to other works may be hard to follow at first, The Fall is still insightful and thought-provoking. A perfect mix of intellectual and emotional, this memoir delivers an engaging read.