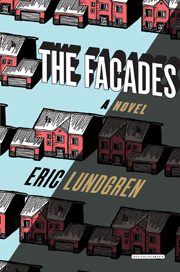 Although nothing definitive can be said about prevailing assumptions in American writing by considering any particular first novel, Eric Lundgren’s The Facades seems to reflect an understanding of what makes a work of fiction “unconventional.” Whether such an understanding arises from influences absorbed in a creative writing program, through the halls of which many younger writers do indeed pass, or simply from noting what works get called “innovative” by critics and reviewers, many ambitious novels embody a widely-held conception of a departure from convention. However, this conception encourages a preference for a certain kind of narrative more than it encourages any challenges to narrative.

The Facades does exemplify this preference, but the first thing that should be said about it is that it is a well-written, well-paced, atmospherically persuasive novel that rewards the reader’s time. It compels attention from its first few lines:

I used to drive downtown every night, looking for my wife. The rush hour traffic was across the median and I traveled the westbound lane of I-99 without delay or impediment, sure I was going the wrong way. The city assembled itself, scattered lights in the old skyscrapers meandering the night sky like notes on a staff. What could I have hoped to find there? People didn’t just disappear, I thought at the time. They left fingerprints, notes, receipts, echoes. If Molly had walked from her opera rehearsal to the corner deli and had not materialized there or returned, she must have left a residue behind.

Unlike some novels, The Facades continues from this memorable and compelling opening to satisfy the reader’s curiosity about the narrator’s predicament. The narrator, Sven Norberg, searches for his wife, a prominent opera singer, but he finds only “echoes” of her presence. In the meantime, his relationship with his son deteriorates to the point that the son leaves to join a religious cult. As Sven roams through the fictional city of Trude, his experiences give the reader a sense of the city “assembling” itself—although Trude, a version of a Midwestern rust belt city in decline, is in such a state of disrepair that the impression we get is of a city disassembling itself as well.

Sven is very aware of Trude’s degraded status, but his voyage through the inner depths of the city only confirms this degradation for the reader, while the entropic city also mirrors the loss of energy and purpose in Sven’s life in the wake of his wife’s disappearance. The most devastating manifestation of the increasing disarray and loss of control Sven experiences is the growing alienation of his son, Kyle, who finds both purpose and a surrogate father in Bob Lily, head of the First Church of the Divine Purpose.

Other subplots also dramatize the general loss of function encountered everywhere in Trude. Among the problems confronting Trude is, of course, a financial crisis, and the city’s oafish mayor has decreed that all public libraries will be closed to save money. In defiance of this decree, a group of radicalized librarians occupy the main downtown branch, and throughout the narrative are engaged in a standoff with the police. Sven has a more direct experience with the police himself, in the form of two detectives supposedly investigating his wife’s disappearance but who at best produce only fabricated evidence and at worst rely on the dreams of one of the detectives (nicknamed “The Oracle”). These episodes are half satirical and half surreal, but they never quite stray from the realm of possibility, nor do they descend into freakish whimsy such that the novel loses its direction among superficial distortions of fantasy. The book refuses to indulge in the sort of facile surrealism, increasingly common in American fiction, that takes from the modernist surrealism of the early twentieth century its distortions of reality but without its specific philosophical intentions—as if simply to depart from the protocols of literary realism remains a bold move. The vision of American decline presented in The Facades is appealingly askew, but it is also close enough to the existing circumstances of decline that the novel’s fictional world seems both aesthetically autonomous and uncomfortably recognizable as the world we live in.

The Facades could plausibly be described as a post-apocalyptic narrative, which has been popular enough among contemporary writers (among them Cormac McCarthy, Steve Erickson, and Ben Marcus) that it has developed into a genre of sorts, incorporating elements of both literary fiction and science fiction. Although no particular national trauma or catastrophic event has resulted in Trude’s devastation, as a de-industrialized Midwestern city it represents a culmination of a phenomenon long in the making but here rendered starkly as an urban dystopia, a fate that indeed may await more than one rust belt city in decline. Unlike much post-apocalyptic fiction, however, which frequently succumbs to sensationalist plot devices or is too obviously didactic, The Facades avoids narrative melodrama and refrains from heavy-handed allegory. Lundgren does not distort his fictional world in order to offer a warning about the dangers we court in our present practices, but creates a subtly distorted world and allows it its own logical integrity. If this novel shows the influence of the post-apocalyptic setting, it does so in a more seamless way than many other entries in the genre, without repeating overused conceits or settling for the expected effects.

A primary feature of the fictional world that is Trude consists literally of its buildings, and thus Sven casts his observant eye on the landmark structures he encounters, including the Ringstrasse, a labyrinthine shopping mall that was built by the Austrian emigrant architect Klaus Bernhard and is his “greatest statement on the impossibility of fulfillment with a capitalist culture,” now itself mostly reflective of Trude’s decline:

The Ringstrasse still made quite an impression as you approached on I-99, the whitewashed spirals of concrete looming under the night sky. Bernhard had envisioned it as the locus of a second city, a new downtown for an ideal Trude to replace the declining original. He wanted the mall to look Greek, noting wryly that the Oracle at Delphi was once surrounded by junk dealers and souvenir sellers. The exterior of the mall was blinding in its early years. It gave off an almost holy radiance. . . .
As we walked in the west entrance, I had to admit that Bernhard’s detractors had a point. It wasn’t very successful as a mall. The vast echoing chambers, the blank concrete, exposed the ultimate hollowness of the retail urge. This was especially the case in the mall’s outer rings, where the large department stores were housed. One tiled path might lead you directly to a perfume counter, while another curved around to a copper statue of Hermes presiding over a dried-up fountain full of rusty pennies.

We also get detailed views of the Opera House, where for years Sven’s missing wife Molly presided as a local diva, and the Trumhaus, a home for senior citizens where Sven’s mother currently resides and where Bernhard himself spent his final days, an account of which we get at the novel’s conclusion. This conclusion reinforces the parallel between Sven and Bernhard in their common state of loss—it may be that Sven’s loss may just be a later, faint echo of Bernhard’s, who not only also lost the woman he loved but ultimately “failed to create a world he could live in.”

Sven Norberg finds himself inhabiting the city built by Klaus Bernhard, if anything now even more unlivable, but it becomes increasingly apparent that Molly Norberg, at least, has voluntarily escaped the dreary confines of Trude (and thus avoided the metaphorical fate or Bernhard’s beloved Ulli, who, Bernhard claims on his death bed, is buried “under the labyrinth” of the Ringstrasse.) As Sven is told by a resident of the Trumhaus, however, people like Sven and Bernhard “could never leave Trude.” They are necessary parts of the landscape, the American urban landscape that in both its human and its human-created forms is finally the real subject of The Facades. Lundgren’s achievement lies in skillfully invoking this landscape and making us believe in it enough that we might think we inhabit it ourselves.