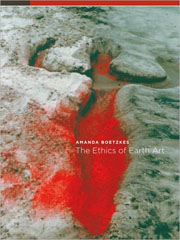 Since the mid-1990s, artist Chris Drury has constructed dark earthen spaces of rock, wood, dirt or branches, called cloud or wave chambers, in rural areas around Britain. Already intense and evocative, these shelter-like structures also have a periscope lens at the top, projecting vapor-like images of sky or water onto the floor of the chamber. Entering for the first time one of these cloistered, dark interiors, Wave Chamber (1996), Drury writes, "At that moment the afternoon sun was hitting the water just where the mirror was angled. Inside it was as if a thousand silver coins were dancing across the floor. As the sun moved away, this changed to ghostly ripples, giving you the feeling of standing on liquid."

In her new book, The Ethics of Earth Art, Amanda Boetzkes, assistant professsor of art and theory at the University of Alberta, reads Wave Chamber as an allegory for an ethical mode of sensory exploration. And she sees this new paradigm running through the work of many earth artists, such as Robert Smithson, Ana Mendieta, James Turrell, Jackie Brookner, Olafur Eliasson, Basia Irland, and Ichi Ikeda. Similar to Drury’s Wave Chamber, the works of all these artists are like apertures through which the earth manifests itself without being reduced to our own frame of reference.

Like Drury, for example, American eco-artist Jackie Brookner also deploys her art as a vehicle to evoke sensation. Prima Lingua, a biosculpture made in the shape of a giant tongue, stands in what began as a pool of polluted water. Between 1996 and 2001, Brookner pumped the water over the surface of the tongue, and over time vegetation grew and thickened on the sculpture, gradually purifying the pool. In Boetzke’s words, “The tongue offers the lively growth of mosses and plants as though they were a burst of flavor.” Further, she suggests, the continuous pouring of water over the tongue “stimulates the emergence [not of words but] of what we might call vegetal utterances that rise up and fall away.” Natural processes become a primary language, a prima lingua, to which we are privy before human language. As a metaphor the pieces exposes the unintelligible transaction of sensations that proceed speech.

In addition to her dense descriptions of specific art works, Boetzke burrows into ethics as defined in the phenomenological tradition, not only by philosophers such as Emmanuel Levinas, Maurice Merleau-Ponty, and Martin Heidegger, but more eagerly by feminist philosophers such as Luce Irigaray and Judith Butler. For example, Boetzke expounds how Irigaray is particularly attentive to the way that an ethical acknowledgment of “the other” is associated with an abundance of sensation.

In a somewhat more controversial move, Boetzke proposes continuities between the land art of the 1960s and contemporary earth artists of today. Some philosophers and critics have attacked earlier earthworks—like Michael Heizer’s Double Negative, a 1500-ft trench Heizer cut into the side of a mesa in the Nevada desert—decrying them as eyesores and intrusions similar to industry, mining, and construction. The standard art history would describe a shift from this early “land art” to contemporary “eco-art,” like that of the Osaka-born artist Ichi Ikeda, who is dedicated to raising global awareness around water issues and conservation through international conferences, community activism, public performance and interactiveWaterArt installations.

Boetzke makes two main points in writing her history of earth art: the earlier generation of earth artists were not just sculptors, she says, but multi-media artists who were interrogating the aesthetic experience of the world and attempting to create alternate modes of perception. The aesthetic dimensions of the artworks had ethical implications. Equally, subsequent generations of earth art have not simply been concerned with restoration, but consistently explore how aesthetics are inextricable from ecological investments.

In the end, perhaps, our anthropocentricism is inevitable, but Boetzke argues that earth art posits at least a humble position in the face of the earth’s excessiveness. This stance of ontological humility, she feels, is the beginning of ethics. By encountering the limits of our perceptual expectations, sensing the earth's excess beyond those limits, artists like Drury and Brookner align their aesthetic project with an ethical acknowledgment of the earth's “otherness.” Contemporary artists create spaces to let nature be, allowing it to manifest itself in all its uncomfortable difference. In Boetzke’s words, the “earth does not stabilize the world but rather stands as an enigmatic presence that continually drives the world to reorient itself.”