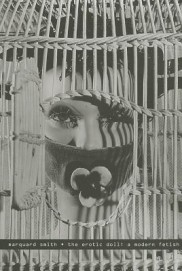 Half a lifetime ago, just after college, I attempted to become a collector of mannequins. At that time, I had not yet learned of the Surrealists’ fetishistic embrace of mannequins; I had not witnessed Duchamp’s endlessly enigmatic Etant donnés, nor dwelled upon de Chirico’s disquieting muses. I did not yet know Hans Bellmer’s iconic poupée, nor had I encountered the famous sculptural assemblage by Salvador Dali, the one comprising a pair of mannequin-passengers crawling with live snails and ensconced within a taxi cab—the “Rainy Taxi” that inspired the title of this very magazine. My desire to acquire mannequins was, or so it seemed to me, a native, naïve, instinctual inclination, born not of my then-incipient interest in Surrealism, but rather driven by a vague erotic compulsion to surround myself with inanimate humanoid figures. I imagined their forms—stiff but curvaceous, mass-made but elegant, fixed but discombobulated—populating, in a sense even animating, my small apartment in all their uncanny stillness.

So I queried nonplussed department store managers, asking for unused mannequins. I scoured the dumpsters outside malls, hoping to procure discarded torsos or disembodied limbs. It was a strange, perverse, obsessive practice, this hunting for bodies amidst the garbage. In any case, I never managed to acquire any of the longed-for figures. (Paying for them was out of the question.) They remained at once conspicuous and out of reach—visible in shop windows and on department store floors, yet seemingly unobtainable. My collection thus remained a dream. Always seeking what I never obtained, I asked, and still ask, What precisely was the object of my obscure desire? What was it that I really wanted, in wanting these mannequins?

Smith’s account of the role of the doll in modernity’s shaping of male heterosexuality draws upon (but also critically departs from) Thing Theory. Smith trains his attention on the doll as a thing, an object, in all its “historical and material particularity,” thereby “foregrounding . . . the doll’s capacities and functionings.” He is less interested in what the doll means (as a metaphor, for example) than on the phenomenological dimensions of “what the doll does, the work that it performs.” This emphasis on the object is expressed in the “three threads” of the book—genealogical, phenomenological, and thing-ological—that “interweave throughout” the book’s three sections.

In his following discussion of Surrealism’s fascination with mannequins, Smith argues that the shop-window dummy, rather than the “Surrealist object” as such, speaks to modern “capitalism’s capacity for generating an erotics that, in creating the perceived conditions of its own undermining, undoing and demise, affirms all the more so its means, power and will.” Attending to the “history, materiality and technicity” of the dummy as well as the Surrealist mannequin allows him to “speak of and argue for an erotics of artificiality in modernity.”

Alienation is also a key aspect of Smith’s account of the RealDoll phenomenon. Although Smith appears reluctant to cast moral aspersions upon the owners of RealDolls, what he says of the disturbing instances in which they mutilate or brutalize their dolls extends to his view of relations to dolls more broadly: “It speaks of the impossibility of intimacy as a form of knowing, a coming to know, a making known . . . of the innermost . . . nature of the self, of another, of a thing.” The agalmatophile—one sexually attracted to a doll or statue—“senses simply a forever dissociating reflection of his own narcissistic self-alienating.” And yet, in this, “he is no better or worse than the rest of us.”

The final section of The Erotic Doll juxtaposes Duchamp’s Etant données with Bellmer’s poupée. The mannequin at the center of Duchamp’s masterpiece “refuses the logic of the fetish as synechdocal substitute”; it is, rather, a “distorting machine for the perverting of vision.” Smith sees distortion as a positive “activity” of “changing” keyed to “the logics of time, eroticism and transformation itself.” He thus draws readers’ attention to the manner in which the famous “anatomical peculiarities” of Duchamp’s mannequin—its curious labial contours, for instance—are produced through the very materials and “process of its making.” The particular circumstances of that material process—having to do, for example, with the molding of the mannequin’s parts—are not incidental or trivial, but are “built into its very constitution.” The mannequin is everywhere constituted as distorted, and this material distortion piques desire.

Is this the dream that drove my own manic desire for mannequins? And should Smith’s conclusion be read not only as a diagnosis but as an indictment of my desire—and, somehow, of male heterosexual desire? Did—does—my fascination with mannequins reveal my sexuality to be the invention of capitalist modernity? I don’t know. But at best this seems to me to be only part of the story. Maybe like all dreams, this erotic dream, embodied in the doll, contains what Freud calls the “dream navel”—the unfathomable blind spot that “reaches into the depths of the unknown,” both calling forth endless interpretation and refusing any final interpretation. Much as the mannequin embodies an uncanny materiality—lifelike and lifeless—the dream navel announces a presence-in-absence, an animated emptiness, endlessly producing interpretations, and endlessly refusing any final interpretation.