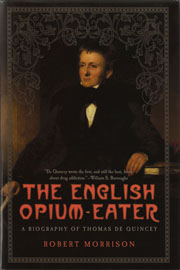 There may have been a Malay, one day, who dropped by unexpectedly at Dove Cottage, and he may have hit up England’s most famous addict for some opium. Thomas De Quincey, to whose dubious recollection we owe this tale, tried, lacking any “Asiatic” language, to communicate by reciting a few verses of the Iliad. Or, to read this odd anecdote another way, in the face of exotic horror, De Quincey announced his own classical education, his status as cultured. Insistence on this dichotomy between the savage and the civilized runs throughout his oeuvre. Carried away in writing, describing the heights of a laudanum high, De Quincey indulges in Orientalist imagery, but as a political reactionary, a xenophobe, he is quick to differentiate fantasy from reality: “I honour the Barbarians too much by supposing them capable of any pleasures approaching to the intellectual ones of an Englishman.”

A gentleman addict, getting a kick from wandering the working class streets or taking likewise forgettable release in the beds of prostitutes, De Quincey fancied himself a man of refined, if particular, taste—“a quart of ruby-coloured laudanum . . . and a book of German metaphysics placed by its side, will sufficiently attest my being in the neighbourhood”—but he was never quite sufficiently a man of wealth. Indeed, as Robert Morrison’s comprehensive account of a life makes clear, debt was a constant problem. De Quincey acquired “new London debt . . . in the very act of extinguishing the old Westmorland debt,” for instance, and, as with drug use, this is a recurring cycle, despite his being repeatedly “put to the horn” and publically humiliated.

One gets the sense from this biography, though, that De Quincey was a hard man to humiliate. Something of a hack journalist (Thomas Carlyle said he wrote “for bread in the paltriest of all newspapers”) who nonetheless created works approaching genius, a man who kept coded entries chronicling his masturbatory activity, and a sycophant in courting the friendship of the famous Wordsworth, De Quincey does not lack for eccentricities, for weirdness. Some of that freaky edge is dulled here by Morrison’s dry narration, but, drawing on publications and letters previously unavailable, this book gives us more of the life of De Quincey than we’ve seen before. If Morrison’s writing tends toward the flat, De Quincey, when he’s quoted at length, more than makes up for it. Consider these “Asiatic scenes,” De Quincey’s recounting of a dream in which “I was the idol; I was the priest; I was worshipped; I was sacrificed.”

I fled from the wrath of Brama through all the forests of Asia: Vishnu hated me: Seeva laid wait for me. I came suddenly upon Isis and Osiris: I had done a deed, they said, which the ibis and the crocodile trembled at. I was buried, for a thousand years, in stone coffins, with mummies and sphynxes, in narrow chambers at the heart of eternal pyramids. I was kissed, with cancerous kisses, by crocodiles; and laid, confounded with all unutterable slimy things, amongst reeds and Nilotic mud.

One almost needs a pith helmet to read such prose, as it offers both a world tour and a psychedelic trip through the trappings of comparative religion. And it is here, among the tropes of De Quincey’s visions—both those he presumably experienced and those he carefully composed for his reading audience—that Morrison’s biography tantalizes with what it reports but, for the most part, does not presume to interpret. Take the crocodile, for instance: this creature haunts De Quincey. As Morrison says, “No single image tortured De Quincey like the crocodile. It brought out his worst fears of self-division and otherness.” But that is pretty much all that Morrison says about it. The biography, by necessity, must move on to other things, the accrual of more debt, the services of more prostitutes. While Morrison has some theories of his own, particularly about “the bifurcation of the self” as an experience that plagued De Quincey, his gestures toward such theories seem designed merely to raise more questions, to inspire future readers—and students, and scholars—of De Quincey to launch their own quests into the strange jungles of his texts.

The author who famously described opium as “the secret of happiness,” wasn’t exactly overflowing with mirth; rather, as Morrison notes, De Quincey was obsessed with death and alterity, consumed by visions of infinite shafts opening in the sky that found intellectual reflection in the “frightful magnitude” of the universe as revealed by new work in astronomy. For De Quincey, too, the Christian theological narrative of the fall from grace was something reiterated individually in every human psyche—through dreams, through trauma, through confrontation and recognition of the “the vile, the bestial, the unthinkable” within us all. Morrison, hiking swiftly onward through the years of De Quincey’s life, drops these intriguing themes like crumbs, one implication being that future books on De Quincey need to focus on precisely these themes, exploring any or all of them in detail through the voluminous De Quincey oeuvre—not just the Confessions, but also his criticism, his explicitly political writing, and that masterwork,Suspiria de Profundis.

Suspiria, indeed, raises yet another question: what are we to make of these dreams, these visions, not just in terms of content—the racism and imperialism of the imagery, the cosmological and theological speculations, the wild psychological theories—but in terms of phenomenon? There’s that Malay again: is he a real person, an opium hallucination, or a conscious literary creation? It may have been in De Quincey’s commercial interests to confuse these categories, as with his encounters with Levana, the Roman goddess of childhood education—not, De Quincey tells us, via “the poor machinery” of “spelling books-and grammars,” but rather by “that mighty system of central forces hidden in the deep bosom of human life”—as well as those three dreadful Mothers that flank her in Suspiria.

Morrison makes clear De Quincey’s investment in fashioning himself as a product. “What shall be my character,” writes a young De Quincey. “I have been thinking this afternoon—wild—impetuous—splendidly sublime? dignified—melancholy—gloomily sublime? or shrouded in mystery—supernatural—like the ‘ancient mariner’—awfully sublime.” The desire to become such a “character”—and, in turn, to turn “character” into a commodity, to invent himself as a celebrity author via his own weird experiences, either lived or claimed—remains the central and most intriguing aspect of De Quincey and his work. Morrison sometimes relays this without much spark, as when he writes, “Laudanum dragged De Quincey through hell . . . Yet like many addicts, in the nineteenth century and far beyond, the severity of his addiction did not prevent him from functioning at very high levels for decades.” Opium, however, was far more than merely “a prison, not a death sentence,” as Morrison puts it; the embrace of the exotic, the harrowing, the supernatural, and the sublime was also all part of a project to produce literature by living a literary life. It is for this conceptualization of art through experience, as much as for the glimpses of historical context revealed by his life, that De Quincey is of interest to the contemporary world.