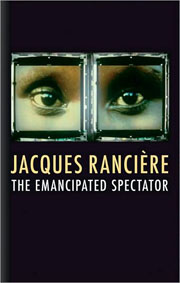 The five pieces included in Jacques Rancière’s The Emancipated Spectator offer up an accessible, if sometimes frustrating, introduction to his work as a whole. Built up and refined from an extensive list of lectures spanning four years, these chapters possess the looser, more relaxed feel of an academic talk, lending them an approachability that is often absent from a more rigorous philosophical work.

Rancière utilizes a great deal of allusion to other theories, with the consequence that his arguments, at times, move very quickly from example to example without a great deal of further explanation. This is not to say more intensive discussions of philosophy are absent in this work—indeed, the first four chapters are all, in some way, grounded in a critique both of Plato’s theory of images and Guy Debord’s prescribed antidotes to the “society of the spectacle,” namely his concept of détournement.

The guiding thread that connects these critiques is the spectator’s involvement and interpretive place in the relationship between politics and the visual arts. The latter here is conceived of very broadly, as Rancière’s discussions dwell primarily on drama, film, photography, and modern art, but also include excursions into literature and video. His primary concern is with the traditional conceptual division between making and viewing, with the former endowed with a dynamic activity and the latter consigned to a thoughtless passivity. Like most conceptual dualities for French theory, Rancière finds this one lacking on several levels.

Most importantly, he wants to challenge the idea that a leftist political art that makes a conscious attempt to move the spectator from a passive to active state, through the elimination of the gap between viewing and acting, offers up a form of liberation for the viewer. Instead, Rancière charges such work with replicating a certain paternalistic attitude toward the audience, an attitude that exists as the obverse of Plato’s conservative theories about viewing.

He specifically points to Brecht and Artaud’s theatrical methods, as well as Martha Rosler’s photo—collages, as participating in this process, although one could add other examples, such as some of Godard’s films of the late ’60s and early ’70s. Despite the well-meaning political commitment of these works, Rancière argues they fail to leave space for viewers to develop their own political and aesthetic conclusions, fundamentally limiting the ability to participate in the meaning making process.

Thus, the emancipated spectator of the book’s title emerges “when we challenge the opposition between viewing and acting . . . when we understand that viewing is also an action that confirms or transforms this distribution of positions.” With this argument Rancière re elaborates a position he first presented inThe Ignorant Schoolmaster, in which traditional pedagogical techniques, where an instructor with mastery of a subject matter dispenses it to ignorant pupils, are overturned in favor of a system where a teacher assists students in following the contours of their own learning processes. At the basis of this alternate form of pedagogy is a conviction in the fundamental equality of all individuals’ capacities for understanding and learning.

This theme of intellectual egalitarianism is by far the strongest of the book, and it has obvious repercussions on how we understand political art. For Rancière this means that politics does not need to be injected into art to make it socially responsible, but that the process works the opposite way, since “aesthetic experience has a political effect.” The new ways of seeing that art engenders within the spectator offer up a variety of newfound perspectives to create potential communities that challenge dominant political and social orders.

Despite the obvious admirable position of these arguments, Rancière rarely takes stock of their limitations. For while it is one thing to affirm the ontological equality of all spectators, it is another to recognize the way dominant social processes, like that of traditional pedagogy, inculcate habits and modes of thinking that mould this unbounded capacity for viewing in thoroughly rigid ways.

This objection leads back to the problem of ideology, today so unfashionable, that Rancière dismisses early in his argument in chapter one. But philosophically arguing away an issue too often substitutes for its social resolution, which suggests, at least to this reader, that Rancière’s egalitarian aesthetics are in need of a sociology of art to complement, and complicate, their cogent critiques.