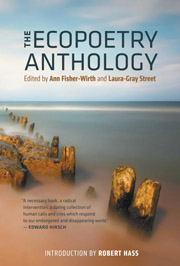 Within days after headlines announced that global carbon dioxide levels had reached the critical milestone of 400 parts per million, a survey of scientists showed that only three percent doubt that this a human-induced planetary phenomenon. Freak violent storms, salination of formerly arable soil, displacement of millions of creatures, habitat loss, and drought are among the features of the new world disorder we’ve unleashed through burning fossil fuels, sending the byproducts of our lives into what poet Chase Twichell calls the “gaseous ocean overhead.” This sobering trend ought to warn us to reconsider habits that emerged from the stale notion that we are somehow separate from nature. As this bold, irreverent collection of poems attest, we are not only part of nature, the damage our ways have caused reaches beyond the earth into the thin atmosphere swathing the planet. Out of this cacophony of voices comes an appeal to treat the world as the sacred place it is.

This volume does not present nature poetry that places the detached, observing “I” in the center, but poetry that draws from ecology, geology, astronomy, and biology. Sometimes these poems quietly bow to occurrences between organisms oblivious to us. Unlike the “cityfolk” who bypass the San Joaquin valley to “seek splendor; who would touch them must stun them,” William Everson finds solace in “nature neither freaked or amazing,” and in that stillness, he experiences “love as the leaf does the bough.”

Unabashed in their confrontation of human arrogance, these poets address absurd quandaries and human foibles. As if to shatter the belief that life is a hierarchy with Homo sapiens at the apex, poets like Susan Stewart challenge prevailing notions about human supremacy. She imagines the dream lives of animals, “the languages that fall beyond our hearing.” In a heartfelt rant, Sheryl St. Germain describes an inclusive litany of damage caused by the oil spill in the Gulf of Mexico: “It’s an old story, really, how we always dirty what we love.” In “Wild Geese,” Mary Oliver offers a reprieve, an antidote to non-stop bad news:

Whoever you are, no matter how lonely,
the world offers itself to your imagination,
calls to you like the wild geese, harsh and exciting—
over and over announcing your place
in the family of things.

Robert Hass’s introduction traces the “intellectual recalibration” catalyzed by Darwin’s observations about the origins and interconnectedness of the marvels found in nature, starting with the coining of ökologie “from the Greek word oikos, which means ‘household,’” in 1866 by Ernst Haeckel, a German biologist whose study of sea creatures required that he understand their forms “in relation to their interactions and their surroundings.” Hass proceeds to dismantle the Victorian cabinet of curiosities to suggest “one had to understand how [specimens] interacted with their environment,” rather than idolize objects isolated from their natural milieu as evidence of “the profligate grandeur of a deity who created so many unique animals in such plenty.” His survey of developments in science, environmental policy and shifts in consciousness provides a condensed history of American poetry that demonstrates the hybridization that results from crossbreeding disciplines. Language is dynamic and organic, and subject to jarring shifts and mutations necessary for adapting to a changing world.

As Hass points out, these poems often acknowledge that beauty is not enough, that nature is more than lovely vistas inhabited by mesmerizing flora and fauna. Beyond mere nature poetry, these poems are all-inclusive and draw considerable inspiration from ecology. They include gritty urban cities, and acknowledge the reign of terror perpetrated by colonialism, industrialized agriculture, nuclear radiation, pollution, and other human products of “civilization.”

The book is organized into two sections: the historical section arranges poets by the year they were born in homage to the lineage passed to the contemporary poets that follow in the next section, which orders the poets alphabetically. The range of carefully selected poems in the latter section is a testament to the durability and influence of the experiments with language and form conducted by poets in the nineteenth and early twentieth century. These poets wrestled with the radical shift in consciousness brought on by scientific breakthroughs, and promoted astonishing growth in the field of poetics.

The poets gathered in this anthology bear witness and they go on tirades, and sometimes bestow spiritual renewal by resacralizing the world, by calling for silence and deep connection. John Ashbery gives readers a list of rivers, Alison Hawthorne Deming provides “Specimens Collected at the Clear Cut,” and C.S. Giscombe includes a diagram of watersheds. Sparrows, seals, squash, figs, tongues, curbs, granite, nets, the LAPD, and even dynamite grooves coexist in this volume, infusing the poems with an undeniable and welcome animism. Take this book outside to read, let its whispers, elegies, shouts, laments enter you. Chances are you, too, are among the people in an Ed Roberson poem, “grabbing at the chance to see / the earth before the end of the world.” Poetry might not derail the course we’re on, but the poems gathered here just might soothe what ails us.