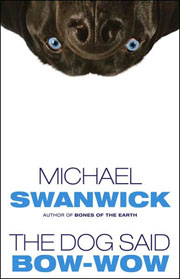 Michael Swanwick’s impressive world-building and imaginative use of genre tropes makes him one of the best short-story writers in speculation fiction. The Dog Said Bow-Wow showcases those talents, bringing together sixteen recent stories, including three Hugo Award winners. In this fifth and, arguably, best collection of his stories, populated by tricksters, dinosaurs, gods, and explorers, Swanwick takes a variety of old themes and styles and twists them into something fresh and new.

A good example of Swanwick’s genre twisting is “A Small Room in Koboldtown,” a locked-door mystery amped up with a setting where faerie, kobold, and other haunts meet old-style borough politics. The young main character in “The Bordello in Faerie” gets more than he bargained for when he crosses the river to visit the rumored brothel; although the world is that of traditional fairy tales, Swanwick makes it relevant by giving it an unexpected, contemporary twist. “The Skysailor’s Tale” is an alternate-universe adventure story with a plot straight from the pulps—complete with an enormous airship. But it is also the tale of a father reminiscing to his child about his boyhood in Philadelphia, his adventures and misadventures on the airship, and how he met the child’s mother. One of the best stories in the collection, “Slow Life,” is a story of first contact mixing hard science fiction, reality TV, and human and alien existential angst.

The title story and two companion pieces feature Darger and Surplus, lovable con artists whose plans often go astray, usually because of their empathy for the natives they are trying to swindle. While the writing carries all the manner and wit of Oscar Wilde, the setting is a slightly dystopic future reminiscent of Swanwick’s Nebula Award-winning novel, Stations of the Tide.

The dog looked like he had just stepped out of a children’s book. There must have been a hundred physical adaptations required to allow him to walk upright. The pelvis, of course, had been entirely reshaped. The feet alone would have needed dozens of changes. He had knees, and knees were tricky.
To say nothing of the neurological enhancements.
But what Darger found himself most fascinated by was the creature’s costume. His suit fit him perfectly, with a slit in the back for the tail, and—again—a hundred invisible adaptations that caused it to hang on his body in a way that looked perfectly natural.
“You must have an extraordinary tailor,” Darger said.
The dog shifted his cane from one paw to the other, so they could shake, and in the least affected manner imaginable replied, “That is a common observation, sir.”

Not all of the stories involve fantastic settings. In “The Last Geek” the title character tours the country as a paid speaker, a living reminder of the golden age of traveling carnivals. In “Triceratops Summer,” dinosaurs appear in a quiet community, but they aren’t the center of the story; rather their appearance heralds change and forces people to reassess their dreams and what is really important in their lives. Nostalgia for simpler times underlies both pieces.

Swanwick isn’t always playful or sentimental. There are two stories dealing seriously with war: “Hello, Says the Stick,” a short tale featuring an innocuous-seeming but deadly alien weapon, and “Dirty Little War,” set during the Vietnam War. The latter story is a bizarre but effective blend of a battle and a cocktail party, illustrating the disconnect between modern war and life back home. In “Tin Marsh,” the relationship between two prospectors who are isolated together on Venus turns deadly. Another highlight of the collection is the final story, the mythic “Urdumheim,” featuring the loss of language, a great battle between good and evil, and the Tower of Babel. There is heartbreak in the story—lovers are separated, a way of life is destroyed, death enters the world—but there is also hope at the end.

In a collection so diverse, there is a danger of fragmentation. Despite the variety of form and subject matter, however, the stories in The Dog Said Bow-Wow are linked by the affection Swanwick displays for his characters. This affection gives the stories a center, a heart that carries throughout the collection.