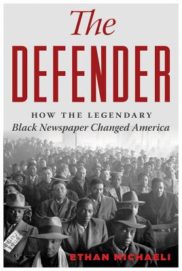 Journalistic style exists along a spectrum, from the terse, skim-conducive relay of stats and facts to the immersive long-form, unraveling complexities. Ethan Michaeli’s book The Defender is an example of the first, which is a profound disappointment considering the richness of his subject matter and the relevancy critical analysis of it would hold for our country’s current racial crises.

The first problem here is one of chronological scale. To offer a survey of the history of this storied newspaper, one simply needs more space (and this is already a very long book). A seeming lack of journalistic discipline comes into play here, too; Michaeli’s narrative lacks focus, gives too much time to tangents. We learn a great deal about the adventures of aviatrix Bessie Coleman, but this feels like a side project. The final two chapters offer an autobiographical coda, likewise misplaced.

The subtitle, as thesis, points to a second stumbling block. Michaeli wants to convince his readers of the Defender’s ongoing relevance. This may not be a winnable fight, but the strategy employed here, which hinges on the fact that the Defender played a role in Obama’s rise to prominence, is not merely thin as an argument but reduces “relevance” to mere electoral impact while simultaneously presenting The Defender as anachronistically monolithic. The paper’s role in the age of the Pullman Porters was not its role in 2008. The newspaper that brought about the Great Migration, pushed for anti-lynching legislation, and called attention to the hypocrisy of black soldiers dying for democracy overseas while unable to experience it at home is, indeed, the same newspaper that sponsors the yearly Bud Billiken parade, an event that is at once family-friendly entertainment and an old-school Chicago style king-making event. But The Defender is not today what it once was; to pretend otherwise does a disservice to the past as well as to the multivalent media present, misrepresenting the newspaper’s uniqueness and ignoring context.

On the early years, under founding editor Robert Abbott, Michaeli heats up content covered with more spice in Roi Ottley’s classic The Lonely Warrior. Oddly, he opts to clean up some parts, playing down the emphasis on shock and titillation and absolving The Defender of any role in inciting retaliatory violence during the 1919 Chicago Race Riot. Michaeli seems to regret the presence of “salacious details” in the newspaper, and does not address the claim, advanced by Ottley, that Abbott knew some of the lynching stories he published to be fictional, justifying their publication with the fact that much racist violence went unknown. On the Race Riot, Michaeli’s Abbott remains cool and high-minded, pleading to his readers that “this is not time to solve the race question”; no mention is made of salaciousness in coverage here, nor of “box scores” of the dead and wounded run as a daily tally. Michaeli’s Abbott, ultimately, is a cardboard, one-note guy; he is motivated merely by the “belief that what African American people needed was a newspaper that would ‘wake them up,’ expose the atrocities of the southern system, and make demands for justice.” This ignores at least two fascinating and interwoven factors in the newspaper’s development: the media milieu in which it was competing for a name and the elaborate system of class and status in the Black Metropolis of Chicago’s South Side. Of its rival papers, The Chicago Bee gets only one notice in the whole book, but competition between The Defender and it and The Whip helped shape not only the distinctive voice and focus of The Defender but also its high society niche.

Michaeli offers some nice details on Big Bill Thompson’s important 1927 mayoral reelection campaign. As a corrective to the more widely known narrative of Mayor Anton Cermak as the coalition builder who united the mosaic of ethnic Chicago, Thompson’s outreach to (and dependence on) voters in the African American wards needs to be known. Michaeli’s attention to the racist propaganda his Democratic opponents used against him remains timely in this election season.

Michaeli also locates Abbott as following in the footsteps of Ida B. Wells, but with the editor’s famous feud with Marcus Garvey he is particularly negligent, rehashing clichés while not only once again removing some of the vinegar from the story but also refusing to reconsider the actions and players involved. Garvey especially is past due for reconsideration (Sylvester Johnson, now at Northwestern University, recently reframed Garvey in response to colonialism, which will shape how people think about Garvey’s career for some time) but Michaeli does not bother. Abbott’s beef with the Jamaican is likewise, surely, about far more than differing thoughts on race. That the men were competing in the newspaper business might be worthy of consideration. Abbott goes to J. Edgar Hoover’s FBI to help bring down Garvey, which is a stunning move, in retrospect. This is precisely what I mean when I say that the subject matter here is rich. Michaeli, however, gives us a treatment that is not just tepid, but reads as troublingly dismissive, as when he states that Garvey

appointed his own ambassadors, generals, and cabinet members, bestowing titles on his followers such as ‘Supreme Potentate’ or ‘Lady Commander of the Order of the Nile.’ Many of his American followers, though they had no intention of ever leaving the country, seized on the chance to transform themselves, even for just one day, by exchanging their workaday clothes for uniforms and marching proudly through the heart of their city.

Not only did Garvey, with such uniforms, change America (consider the Nation of Islam and the Black Panthers, to name two post-Garveyite movements), he was also tweaking an established fraternal society form (which dominates the pages, in words and photographs, of the Chicago Defender in the early twentieth century). Again, context is strikingly absent in Michaeli’s coverage. We hear, in these pages, that Abbott becomes a Baha’i, but we learn nothing about that religion’s relation to Chicago, nor do we hear how scathing (and often hilariously so) Abbott’s Defender was on religion. Michaeli presents the conversion as mere rejection of Christianity’s connection to racism; this oversimplifies Abbott’s interest in—and, really, proselytization for, in the pages of his newspaper—Baha’i, and it overlooks his equally passionate distaste for what he took to be metaphysical hokum or the hypocrisy of faith-for-sale. On the Great Migration, Michaeli tells us about a Tribune editorial entitled “Black Man, Stay South!” but we never hear about The Defender’s own warnings to new migrants about propriety (including similar sentiments urging those Southerners who don’t learn to behave—in the case of one cartoon, this involves fishing, shoeless, from city bridges—to head back to the South.) Abbott and his newspaper deserve a reading with more analysis.

After Abbott’s tenure, Michaeli chugs along, hitting major moments in history until, without explanation, he more or less skips the 1970s and 1980s. Again, odd editorial choices reign: the Jackson Five are mentioned, but there’s no coverage of either of Jesse Jackson’s presidential bids. Then we get to those final chapters, and history gives way to memoir. “Working at The Defender allowed me to see the truth about America,” Michaeli writes, “that ‘race’ is a pernicious lie that permeates our laws and customs, revived in each generation by entrenched interests that threaten to undermine the entire national enterprise, just as it is challenged in each generation by a courageous few who believe that this nation can truly become a bastion of justice and equality.” This, if you’ll pardon the pun, offers a black-and-white reading of a dynamic that any issue of The Defender shows to be complex. As the problem of race in America has increasing, unbearable urgency, we could all use some clear and critical analysis of The Defender’s robust and multivalent role throughout history. This, unfortunately, is not that book.