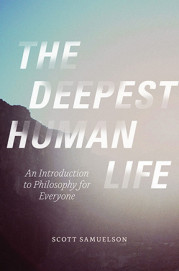 An Introduction to Philosophy for Everyone
Scott Samuelson
University of Chicago Press ($22.50)

With The Deepest Human Life, Scott Samuelson adds to the steady output of philosophy books aiming to return philosophy to its core motivations: “This book is my attempt to bring philosophy down from its ethereal theorizing and put it back on the earth where it belongs, among wrestlers and chiropractors, preschool music teachers and undertakers, soldiers and moms, chefs and divorcées, Huck and Jim—you and me, in fact.” A passage such as this risks making philosophers out as having absconded with the “love of wisdom” for deviant purposes (publication, tenure, elitism, etc.), but we needn’t disparage professional philosophers to say that much of their work is not relevant to what the democratic “we” are looking for—namely, sound advice on how to live.

The primary reason there are so many books like The Deepest Human Life—just in the past few years we have James Miller’s Examined Lives and Astra Taylor’s Examined Life (not to mention, going back to 1990, Robert Nozick’s The Examined Life), as well as Jim Holt’s Why Does the World Exist? and Sarah Bakewell’s How to Live, to name only a few of the most well-known titles—is not that we’re still awaiting the knock-down argument that will win philosophy back from “them”; it’s that in each iteration of this sub-genre we as readers are presented with models for how we might philosophize for ourselves, assuming as these books rightly do that to do philosophy is part of what it means to be human. Not philosophizing, after all, is merely to philosophize badly.

The approach Samuelson takes to make his introductions is to overlay a history of philosophy with a series of questions central to the era (e.g., “What is philosophy?” “What is happiness?”) that he colors with anecdotes from the classroom (he is a Ph.D. and a professor of philosophy at a community college). About half of The Deepest Human Life is devoted to the Greeks. Samuelson, like many democratizers before him, begins with Socrates and uses a healthy share of his ink on the Hellenistic philosophers the Epicureans and the Stoics, who tended to orient their philosophies explicitly around issues of human flourishing, and who are frequently neglected in the academy.

A common next move in such a history is to jump to Descartes alone in his bedroom utilizing a method that is still available to each of us today to interrogate everything he knows. Samuelson does get there, but only after making an unexpected and pleasant deviation to consider the work of Abu Hamid al-Ghazali, a Persian Sufi philosopher of the 11th century. The discussion of al-Ghazali occurs in the context of the question “Is knowledge of God possible?” As a mystic, al-Ghazali answers in the affirmative, pointing to a direct experience of the divine. Of all the philosophers in the book, it’s probably al-Ghazali who is the best example of what Samuelson calls “real philosophy”:

. . . an odyssey with distinct stages. It begins in a wondrous and often problematic relationship to common life. It goes through a stage of questioning that leads to a blinding skepticism. Insofar as it continues, there’s a moment of illumination, which leads to a form of critical theorizing (this is where professional philosophers often take up residence). But its final destiny is to return to common life and “know the place for the first time.”

From here it is back to our familiar Western philosophers, including Descartes and Pascal and the moral philosophy of Kant. At times, the choices seem arbitrary, as if their function is to teach readers about philosophy rather than to lead them back to their own philosophizing, which is otherwise the book’s aim. Even so, the text remains lively and is greatly bolstered by the discussions Samuelson has with his students, many of whose plainly spoken insights appear as profound as what many of the canonized philosophers have on offer. Simon Zealot, for example, who takes his name from a little-known apostle of Jesus and is a.k.a Martin Kessler, asks,

Do you find that most of life’s problems can be solved with a little creative shopping? Is television your primary form of entertainment? . . . Do you find that there’s just not enough time in the day, especially for things like exercise? Are you tired right now? Despite this constant lack of energy, do you believe that everything will work out in the end? . . . If you answered “yes” to most or all of these questions then you might be suffering from an illness called phobosophitis, or, as it’s known by its more common name, the zombie disease.

Reductivity notwithstanding, Simon demonstrates the eternal truth that to earn its name philosophy must engage contemporary obstacles to the “good life.” What to do about Internet addiction, for example, is a serious problem for today’s philosophers, just as Pascal might remind us when he writes, “The sole cause of man’s unhappiness is that he does not know how to stay quietly in his own room.”

The Deepest Human Life offers us the kinds of tools we have always needed to face Pascal’s implicit challenge to face ourselves, difficult though the task may be. As Samuelson writes, “We go on the journey of philosophy, the search for wisdom, despite what is comfortable, despite what is sensible, often into the depths of our loneliness—impelled by the force of a truth we don’t even know, but that somehow we know we must know."