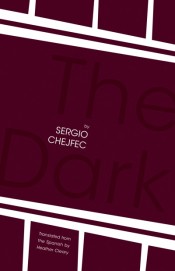 Early in Sergio Chejfec’s The Dark, the nameless narrator describes his disorientation when looking over a landscape as “the vertigo of simple things.” This phrase describes the experience of reading Chejfec’s novel, an interior monologue by the reclusive narrator. He remembers his affair with Delia, a young factory worker whom he abandons after she becomes pregnant. His search for meaning leads him to interrogate his memories: “I always felt as though I occupied a place on the outside, that my role was to register things and to draw conclusions from what I saw, whatever the circumstance.” He analyzes fragments of the past as an archaeologist. However, he is the most unreliable of narrators, specializing in indirection, circling around difficult memories only to be deflected into abstraction.

Throughout The Dark, the narrator sparingly discloses details about himself: he is much older than Delia, and from a higher social class. He obsessively tries to understand Delia and himself, but has no understanding of intimacy. He cites lessons learned from reading novels, though he notes the differences between fiction and reality. Novels are created to last, while actions and events are fleeting. At the same time, “One doesn’t write to uncover what is hidden, but rather to obscure it further.”

In light of this belief, the narrator turns from words to other manifestations of the past. He dredges up memories of objects, from a flattering skirt that Delia borrowed to her uniform, and later, even garbage. He states, “in order to salvage the past, to salvage that which is hidden behind things, we also need the concrete and mechanical objects and situations that give us life to this day; it is this past that sustains us, but it abandons us if we recover it exactly as it was.” He reads Delia herself as a sign, noting, “there is more to Delia than just the woman, the worker, the person without whom I was unable to wake or to function; there are also the symbols and the forces hidden within her name.” In this mechanistic view, even Delia’s passion is impersonal: “What I mean is that Delia did not understand her desire—she was aware of it only as an assortment of vague ideas that she, nonetheless, was forced to obey as it pursued its own fulfillment.” In the narrator’s world, “people do not express themselves outward; it is instead the outside world that manifests itself through individuals.”

The narrator devotes special attention to Delia’s job in the factory and her social status in the working class. He remembers watching Delia and her fellow workers from afar, marveling at their appearance as a collective entity, describing them as a “herd.” He applauds Delia’s ability to subordinate herself to machines, the commodities she produces, and the collective she creates with her fellow workers. In the end, he is attracted to Delia in part because of her identity as a factory worker; her later combined identity as a mother and a factory worker threatens his sense of her and of himself.

Why, in spite of these difficulties, does the narrator interrogate his past? One clue may be held in the novel’s title. Remembering the early stages of their relationships, the narrator recollects, “If there is beauty in the world, Delia and I thought, if something moves us to the point we are unable to breathe; if something presses our recollections to the very limits of memory, so they can never be as they were, that something lives in darkness and only rarely makes itself known.” These moments, when Chejfec combines exquisite prose with the human yearning for truth and beauty, keep us reading, weighing the novel’s contradictions, sifting through the narrator’s abstract reflections in search of his life’s meaning.