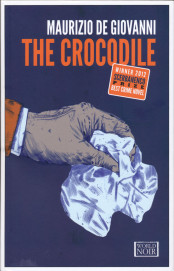 Across class, age, and experience, the characters that people Maurizio de Giovanni’s The Crocodile are defined by their injuries. The driving force behind the plot is grief, and a looming depression pervades the narrative. Like many noir heroes, the protagonist of The Crocodile is an outsider: Inspector Giuseppe Lojacono has been forced to relocate from his beloved Sicilian city of Agrigento northward to Naples, chained to a desk at a police station in a remote precinct. Though both cities are in Italy, Lojacono feels like he has been exiled to a vaguely hostile foreign country.

The fact that he is serving penance for a crime he did not commit adds a stinging resentment to his loneliness. When a series of seemingly motiveless murders across class lines sets the entire city reeling, the police have no lead and the magistrate assigns Lojacono to the case out of sheer desperation. The itinerant detective must delve deep into the pasts of several recalcitrant, secretive characters, each with something to hide, in order to apprehend the murderer whom the press has dubbed “the Crocodile”—so named because he leaves tear-stained tissues at each crime scene.

Even though Lojacono is the only literal exile in the book, mentally, all of these characters are outsiders motivated by alienation, angst, and loss. Each moves through life nursing their own private pain—the story is one of both modern estrangement and enduring grief. This isolation makes it easy for the Crocodile to make his way through the city unnoticed:

Who should bother to glance at him, no different from so many others like him, phantoms that populate the city of shadows? . . .
. . . No one sees those who walk in silence, head down, clearly beset by thoughts and problems; no one wants to run the risk of sharing thoughts and problems, even if it entails nothing more than exchanging a glance.

Naples is desperate to discover the author of these crimes, but, ironically, in an anonymous urban landscape, nobody wants to know. Lojacono’s shared outsider status gives him a special insight into the psyche of the Crocodile: “I can tell you that it’s very easy to be invisible here . . . the city’s full of phantoms, people who come and go unnoticed in your midst.”

At times, Lojacono almost seems to share some kind of psychic link with his nemesis. The other characters see this and recognize it as both expedient and chilling: “It kind of scares me how clearly you can see into the Crocodile’s head; it almost seems as if you’re in touch with him, somehow.” In this vein, The Crocodile’s narrative is also full of doubles and coincidence, which makes for a plot that legitimates a second read. The gray Naples landscape is populated with shadowy characters whose pasts are full of fatal accidents, chronic illness, abandonment, and stubborn ill-will. Tyrannical parents, lingering deaths, and private tragedies function as both aesthetic backdrop and motivating force. These parallels across the characters’ experience give them and their relationships gravity and relevance, even when they are not specifically connected.

Many readers may think of Naples as a sunny, culture-rich tourist haven. However, de Giovanni’s descriptions of the city are more evocative of a blank urban landscape akin to a car-strewn junkyard in a Fernando di Leo movie:

. . . the city waterfront, with thousands of indifferent cars whizzing past the barnacle-encrusted rocks, under spitting rain and a grey sky. The rancid stench, the white rocks piled up like a barricade, the casual litter, plastic bags bobbing in the stagnant water like so many jellyfish corpses.
. . . And it became clear to him that this was no seaside city; here the city and the sea vied in their mutual indifference, ostentatiously ignoring one another like a couple of cousins in the aftermath of a terrible feud.

Although Lojacono feels like an interloper in Naples, this filthy urban setting seems perfect for his vague angst. All this estranged brooding, however, does not mean that The Crocodile is not a narrative-driven novel—the book also works very satisfyingly as a giallo yarn, complete with a lingering, almost lovingly clinical description of a female corpse and the sort of savage, sardonic plot twists that define the genre.

One of the main themes of the book is a lack of justice, moral triumph, or vindication. At the end of the story, little has really changed for Lojacono—he’s still the same outsider, moving alone through a meaningless landscape. The Crocodile’s combination of enduring existentialist themes and giallo titillation blurs the line between literature and genre fiction, and the book is recommended for fans of either.