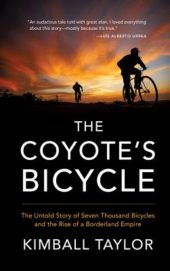 In The Coyote’s Bicycle, the U.S.-Mexico border transforms into both a living creature with a pulsing magnetism and an imaginary architecture of the mind. It is a wall that grows and changes, as each American presidency adds to its fortifications and as migrants carve holes and mark it up with graffiti. It is a wall that draws people in and divides families who come together for picnics on either side, unable to touch. Yet it is also a concept, a permeable barrier built of laws and ideas. As author Kimball Taylor reflects, “so much went on here that went unseen, part of this border edifice had to be constructed in the mind.”

Into this world walks El Indio. Stepping off the bus from his home in Oaxaca with very little money in his pockets, he abandons his intentions of joining his family in San Diego. Instead, he scopes out the border and recruits migrants for Roberto, a former migrant who left his dishwashing job in the U.S. to become a coyote. With Roberto’s sister Marta as his life and business partner, El Indio goes on to build a smuggling operation that guides thousands of migrants across the U.S.-Mexico border on bicycles.

Taylor, discovering the multitudes of bicycles abandoned on the other side, becomes obsessed with finding out where they came from. With help from El Negro, a deportee working at a municipal bathroom in Tijuana, Taylor dives into the world of the migrants and coyotes. Through his words the roles of the borderland business come alive, from el gancho, who distracts the Border Patrol agents from the migrants as they prepare to cross, to el levantón, the getaway driver waiting to meet the migrants in the U.S.

Hoping for a clue to their origin, Taylor follows the bicycles after their abandonment, charting their route through police auctions, prisons, and movie studios that create facilities for military training. During his exploration of the bicycles’ histories of theft and new ownership, Taylor always comes back to the migrants and their ride across the border:

I pictured the migrants he’d described, waiting for a signal. I imagined a wave or a whistle. The cyclists’ feet leaving the ground and finding the pedals; sprockets and chains engaged; balance in momentum; the dark maw of the culverts admitting a pinprick of distant light; the tunnel vision; the awful, damp smell of the pipes. And then they were gone; they’d left my imagination and rolled into the very same portals that carried silt, sewage, appliances, refuse, lost and mislaid items downstream.

Though this is El Indio’s story, the bicycles serve as its vehicle, with sprockets and spokes opening and closing the narrative. Like the book’s characters, the bicycles are continually drawn to the border. As Taylor writes, “My guess was that even a spiritual journey needed a new set of inner tubes and some brake cables now and again.”