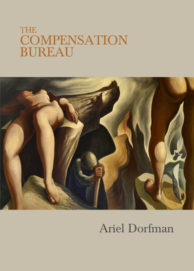 In his new novella, Ariel Dorfman draws the conclusion that despite everything the angels of mercy can do for us, the human condition seems doomed. The Compensation Bureau is a parable in which the universe needs tender care, like a garden of unearthly delights. Angelic creatures calling themselves Actuaries work the terrains on the Lazarus Project, keeping things in balance between light and dark forces: “Conceived in response to the shocking violence observed in humankind, the project identifies people who have wrongfully died at the hands of others, and attempts to make up for the cruelty and pain they faced in life and death.” That’s right, Earth is the problem child of the universe. We just can’t quit the violence. The unnamed narrator Actuary tells us, “I have been gradually worn down by so much malignancy.”

For Dorfman, exposure to such malignancy has been a mainstay of his life. Born in Argentina, the author spent some of his boyhood in the U.S. but left when his parents were threatened by the pressure of the McCarthy trials. They moved to Chile, where Dorfman grew up; he eventually befriended and advised Salvador Allende but felt forced to leave when Allende was driven out with the CIA’s assistance and replaced by the Pinochet regime. He then moved back to the U.S., where he continued his writing career.

Like his good friend the late Harold Pinter, Dorfman’s major concern in his work is the power and destructiveness of unbridled tyrannical and fascist forces that degrade popular politics and make representative democracies problematic, if not impossible, to achieve or maintain. Pinter hated imperialism, and with his Nobel Prize speech laid into U.S. hegemonic aggression, which he saw as catastrophic in its neo-fascist requirements. Dorfman, like Pinter, is a playwright, and his most famous work, Death and the Maiden, is a study in the roles developed between the “interrogator” and the victim during torture. Dorfman turns the tables, however, and the play becomes a kind of radical interpretation of human empathy.

It’s just such radical caring that carries the spirit of Dorfman’s parable of angels in The Compensation Bureau to the rescue. The Actuary has witnessed it all and at a conference reports to fellow Actuaries:

I saw children scorched in ritual fires. I saw women being stoned for the crime of love and I saw women being murdered because they refused to love the lords who had bought them. I saw men decapitated and men thrown from cliffs and men whose hearts were carved out and men who were blown to pieces and men impaled with their entrails bleeding into the soil and men and women and children and the old and the new and all ages in-between suffering.

On and on she goes, and the others have similar findings. But in Dorfman’s story the narrating Actuary falls in love with a victim of horrific violence named Alba Jannah. Jannah deeply moves the Actuary with her commitment to love at all costs despite the horror meted out to her. Our narrator discovers that Jannah’s modus vivendi is, “They can kill me but they cannot kill my love.” For a worn-down Actuary, this is tonic for the soul.

Listening “at some point in time, from some point in the Universe,” the Actuary hears the dying brutalized woman’s last thoughts, and barely believes what she hears:

The garden, the garden, it does not abandon her in her hour of need.

Finally, it seems one of these creatures can love unconditionally, at least one of them knows amor fati.

The Compensation Bureau, like Dorfman’s other recent short novel, Cautivos (OR Books, 2020), is tangled up in blue, as the Bard from Duluth would put it. There seems no end to our torment of each other, and words seem often to amplify the problems we face together rather becoming the avenue down which we move toward our common enlightenment. The Compensation Bureau is no easy remedy for our blues, but it qualifies as a warning to look up and see the stars and know our place before it’s too late.