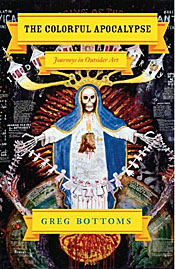 Traveling through god-haunted regions with author Greg Bottoms as a guide pitches the reader into unusual physical and psychological territory. No stranger to the Christian-infused South, neither is Virginia-native Bottoms indifferent to the religious preoccupation that sometimes occurs with mental illness. Haunted by the impact of his brother’s schizophrenia and violence—his brother was incarcerated for nearly burning down the family’s home while his parents and another brother were inside—Bottoms sets out on a search for the whereabouts of the micro-thin, semi-permeable membrane separating religious ecstasy and madness.

Using the travel narrative as a means to unveil what drives certain individuals to create their prodigious, overtly religious art, Bottoms assumes the role of roving journalist to gather intimate, personal stories about outsider artists William Thomas Thompson, Norbert Kox, and the late Howard Finster. Shying away from analysis, he opts instead to let the characters speak for themselves: “I want things to reveal their connections to other things, to show unity, to make sense.” He includes snippets from books about outsider art and mental illness; the overall effect is a mix of journalism and journaling, resulting in a sort of self-reflexive collage.

The narrative is strongest when Bottoms offers specific, visual details—for example, he describes an effeminate rollerblader in tight, white shorts and gleaming gold jewelry skating perilously close to the prison near Finster’s Paradise Garden, the drab colors of the prison a vivid contrast to the bright, garish colors of the garden. At times, Bottoms cannot disguise his discomfort, such as when he encounters a storeowner who proclaims how good slavery was for the country.

In the process of documenting instead of critiquing, Bottoms makes generous use of notes from his journals and transcribed tapes of interviews he conducted with the artists and people connected to them. There is a raw, unedited quality to the portraits; the reader becomes a fly on the wall, eavesdropping on conversations that veer into some difficult territory. Each of these artists experienced Christian-centered visions that altered the course of their lives, visions of such a profound nature that they felt compelled to pick up brushes to paint messages they received from God.

It’s difficult to avoid reading this as some sort of pathology involving elaborate, paranoid, fixed delusions of a religious nature—or have these artists stumbled upon a creative ordering of a chaotic world, ways of giving rampant contradiction, dissonance, and nihilism some sort of meaning? If their worldviews were more coherent, less fixated on demonizing segments of the population, perhaps their apocryphal and troubling visions would have granted them the roles of prophets.

As it is, Bottoms reveals artists who all broke with the conventions of their past, who found constructive ways to recover from traumatic histories, and in this way avoided being diagnosed according to the DSM-IV, the manual that governs contemporary psychiatry through its symptom-based criteria (a text Bottoms took on his journey). In the process, they found their own ways to heal without use of potentially soul-deadening psychotropic drugs.

Bottoms demonstrates empathy for his subjects, acknowledging “It is easy to ruin a life—my life, your life: it can take only a little well-placed destruction.” While attempting to get at the impulses behind the creation of quite disturbing, with mutilated Christ figures and “bloody baby doll” parts, he sometimes falls prey to one of the pitfalls he perceives in outsider art. Citing an example from John Berger’s Ways of Seeing, about how information alters perception, Bottoms writes: “The way we see and interpret is suddenly charged by tragedy. Outsider art, once collected, often makes the caption more important than the painting for the sake of display.” But the way Bottoms portrays the artists occasionally veers close to what he condemns, as he offers portraits that emphasize his subject’s madness over their work. He takes stabs at his reporter role, too. “If there is ugliness in outsider art collection, there is ugliness in the collection of a life story, too.”

That reporting can get a little sloppy: at the American Visionary Art Museum in Baltimore, he incorrectly refers to an exhibit as “Ascending Addiction,” when it was actually called “High on Life: Transcending Addiction.” And instead of grappling with the current debate about outsider art, Bottoms opts to focus on an easy target—the unfortunate sideshow appeal of the work of outsiders, whose work is often overshadowed by their biographies.

The work of outsider artists is unusual, and the biographies of its makers are often riddled with tragic circumstances. Bottoms makes a valiant effort to seek the common ground these artists share, to transcend madness to reveal what humanist psychiatrist Dr. Hans Prinzhorn saw as one of the fundamental impulses driving art-making—“to actualize the psyche and thereby build a bridge from the self to others.”