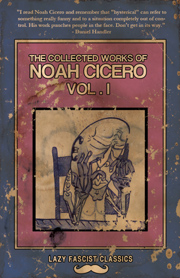 The Collected Works of Noah Cicero Vol. I assembles eight of Noah Cicero’s earliest works as parables for the American nightmare, vomiting out truths that bask in bawdy flashes of lust. Much of the prose fluctuates between long sequences that are stream of consciousness in visceral bursts and caustic dialogue that is raw, pulpy, and disturbingly authentic.

The Condemned is the most representative of the works here, with its bouts of poverty and sex in Youngstown, Ohio. Split into three parts, the first, “The Warrior,” is about Kathy, a stripper who is eight months pregnant. She’s not a likable protagonist, but she struggles, swears, and strips for survival. She lays bare the hypocrisies of everyday life and does it with an audacity and indifference reflected in the writing’s bold terseness and poignant directness:

Kathy thinks. Her thoughts are loud. Fuck, not another one! I can’t take another one! Why won’t this baby just die! Just fucking die! I already have one, and I don’t even like that one! How the fuck am I supposed to deal with another one!
. . . She must look away.
For she is the filthy, impoverished trash of America.
America, where nothing can be wrong.
For America is always. For Americans are moral and good.
They set the world straight.

The both of us stood there, me a Youngstown boy, and her a really hot Mexican chick with a dick.
It was weird.
But the best experiences always are.

Rounding out the trilogy is “Civilization,” which is the most ambitious of the three. It explores the history of the world and is more philosophical in nature, if philosophy were irradiated by doubt and madness. Topics like love and identity are given surgical facelifts, though the results are far from beauteous:

The history books say the decline and eventual disappearance of the Harappan culture is a mystery.
There is no mystery here in America.
The reasons can be seen on every TV channel.
Written on everybody’s face. The people have given up.
They are too mentally deranged to even revolt.

The Condemned isn’t just about a gallery of strangers, but comes to represent the metaphysical state of our lives. It’s as much a query as it is a verdict—only the questions are more important than the final result. There is no sublimation of poverty, no glorification of sexual acts. Vulgarities are exposed as such, and the neighborhood Denny’s acts as a poor man’s Camelot. With the traditional story arc snipped short, redemption isn’t even part of Cicero’s vocabulary. This is literary minimalism at its most terse, reflecting the fact that even hope has been shredded to a tiny strip that might snap at any second:

This book is my asshole.
The books are not my babies.
They are my assholes.
After this book gets published.
I will have three assholes.

Very few authors invite readers to inspect and read their assholes. The Collected Works of Noah Cicero Vol. I never hides what it is, and even revels in its brash lewdness; it’s up to readers to decide whether they want to probe further or not.