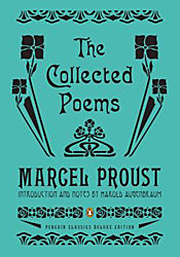 By the early part of the twentieth century, the novel had supplanted the epic poem as the major vehicle by which literary artists might strive for the highest level of accomplishment. As a novelist, then, rather than as a poet, Marcel Proust stands alongside perhaps only James Joyce as the modern writer who comes the closest to achieving the scope of Homer, the fineness of Vergil, and the encompassing vision of Dante. Proust’s great work, In Search of Lost Time, is like nothing else in literature, with a structure that attains to the most extraordinary works of music, a visual and symbolic order comparable to the aesthetic of the gothic cathedral, and a cast of characters as rich and memorable and multifaceted as that found in the works of Shakespeare, who’s probably the only writer who created a larger and more vivid world. It took Proust decades to discover both his voice and his genre, however, and in his early years he was considered by friends and enemies alike to be little more than a talented dilettante, a frivolous dandy casting words about in stories, essays, parodies, pastiches, and occasional poetry in what seems in retrospect like a halfhearted attempt to make his sparkling personal genius substitute for real literary effort. His great work makes his lesser work interesting by reflection, though, and as 2013 marks the centenary of the publication of Swann’s Way, the astonishing first volume of his magnum opus, Penguin Books has released The Collected Poems to ply the ever-consuming appetite of the Proustian reader with yet more marginalia.

Collecting 104 of Proust’s poems, including six poems not published in Francis and Gontier’sCahiers Marcel Proust: Poèmes, this volume is now the most complete collection of Proust’s poetry in any language. Edited by Harold Augenbraum, the founder of the Proust Society of America, The Collected Poems includes parallel French and English text rendered by nearly twenty different translators, including the exceptional Lydia Davis, and features almost one hundred pages of exhaustively Proustian end-notes provided by the fascinating and idiosyncratic Augenbraum. At the beginning of the notes, there’s a quotation from Proust’s friend Robert Dreyfus that says, “Marcel Proust read footnotes,” and it’s in fact in this section of the book where the reader finds the most insight into Proust’s creative and personal world. Like most writers of fin-de-siècle France, Proust was engaged in a constantly evolving public discourse that raged in literary journals, in salons, and in loaded and coded correspondence—a discourse whose referents and meanings were commonly understood and therefore often left unspoken—and so Augenbraum’s notes supply a large percentage of both the information and the pleasure to this volume. For instance, take poem 49 (“Chanson”):

Bigger than the whale
And the narwhal
Is the belly, the belly
Of Bréval!
Despite a sentence too severe
By a singing rival
For her talent my signature
Rattles its rifle.
History! God what an eyeful.
Such love bequeathed to A.B.:
Daudet, Lautier, Pol Neveu, Leygue,
And the chaste author of Ferval.
The very love of Pierre Lalo
O Meretrice
Makes your brow like a halo
From Berenice.

Proust wrote this poem in August of 1906 and included it in a letter to his bosom friend Reynaldo Hahn, who was intended to be its sole audience and who was instructed to burn both the poem and the letter. Like a large portion of Proust’s poems, “Chanson” assumes a common understanding with the reader, using proper names rather than poetic language to convey meaning and imagery, and so it really only works if you’re friends with Proust. Augenbraum’s nearly three pages of notes to the poem tell some of the back story, which is full of intrigue and interest, with the dramatis personae of Proust’s life crowding into this volume with the interconnectedness of In Search of Lost Time, but on its own there’s little to catch hold of in the naked lines themselves.

The shorthand references Proust uses so often in his poetry serve as a stark contrast to the mature method of his novel. In Search of Lost Time is a work so wholly imagined and conveyed that even its most arcane aspects come to light somewhere within its endlessly generous pages. It’s a work that holds all of its own keys; when, for instance, the character Odette is described as looking like Zipporah in Botticelli’s Sistine Chapel frescoes, the reader can visualize the painting from the book’s descriptions. Proust the poet simply mentions a painting and lets the reader fill in the details, but Proust the novelist has learned that this is insufficient and that the work must be its own world.

Taken as a series of rejoinders among friends and colleagues, Proust’s poems are often amusing and enlightening, if not exactly moving or meaningful or startling as works themselves. As a poetaster who hadn’t seriously studied prosodic form or ensconced himself in the real work of forging a poetic identity, Proust the poet mostly sounds like an echo of his times—which means that he sounds a bit like Baudelaire in some of his imagery and subject matter, but with none of the originality and none of the sense that he’s pushing forward any kind of artistic project. For readers of In Search of Lost Time, these poems (and their notes) will delight when they engage the people that Proust would later take up in fictional form, such as his beloved maid Céleste Albaret, to whom a late poem of appreciation is addressed. If you’re not already immersed in Proust’s world, however, The Collected Poems is probably not for you and is certainly not the place to get started.