THE CLASSICAL TRIVIUM: The Place of Thomas Nashe in the Learning of His Time
Marshall McLuhan
edited by Terrence Gordon
Gingko Press ($39.95)

What happens when you use a new lens to reread a familiar aspect of the world? The use of such a tool can be facile—to mix metaphors, it can be the sort of hammer that makes everything look like a nail—or it can transform the familiar landscape, make new attributes appear.

The crafting of such new lenses is perhaps the best use of real scholarship: the work of deep imagination as well as painstaking acquisition of fact. Such a new lens can tell us how careless our views of other times and places often are. When we are imprisoned by familiar assumptions, such times can seem too similar to our own, and the differences we do perceive are not understood fully, because we lack a full context of difference. The careless move forward and the automatic reversion constitute a double motion that keeps us too centered on our own assumptions.

Both of these books can act as such new lenses, with different degrees of acuity. 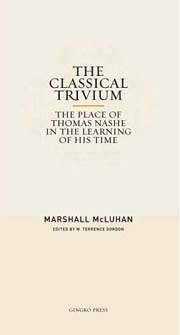 McLuhan's piece on Thomas Nashe, and his use of the trivium to understand the full context of Renaissance rhetoric, is a kind of textbook example of the transforming power of an unfamiliar concept understood fully and researched exhaustively. McLuhan used the concepts honed in this work—which was his doctoral thesis—to transform our understanding of the importance of the medium, the form, to meaning. The distinction between form and content could never be simply assumed again.

The trivium—grammar, dialectic, rhetoric—was a curriculum, a set of methods, dating from the Greek classical era. It's a system to produce meaning that's consistently readable. That is, it's a machine for writing, and for reading the writing that's been written under its aegis, inside its system. It was the bedrock of scholarly curricula from the Greeks all the way through the medieval era and into the Renaissance, a kind of disembodied doppelgänger of the hard-built forms of our culture.

In his thesis on the topic of the trivium in Thomas Nashe's writing, McLuhan seized on some of the systems-style thinking that characterized his later work on the relation of medium and content, and found in the medium of a Classical and medieval curriculum (the trivium) a key to the eccentric and brilliant Renaissance writer Thomas Nashe's message. The increase in clarity this brought to his understanding of Nashe was a foretaste of the increased clarity to be brought to a larger study of culture using similar methods. In his scrupulous attention to the importance of the history of form, content—any content—was seen to be far more intricately tied to it than we previously suspected.

What about the other book? The other new lens? Timothy Hornyak attempts to revise mistrustful Western ideas of robotics and the cyborg by giving us the lens of Japanese mechanical history. The view of the human simulacrum, he says, is very different in Japan. By giving us a careful history of what produced that difference, he attempts to inflect, our understanding of the possibilities of the medium. 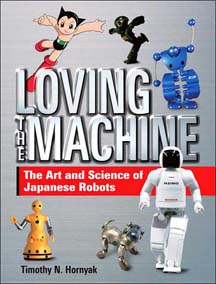 The robot—both the aestheticized human robot and the functional industrial robot—is a device and a set of ideas as well. We can displace ideas of humanness onto this doppelgänger, ideas of what matters about our bodies, our wills, our functions. The robot is a kind of embodied rhetoric of the human, and different cultures will take different attitudes to it. Hornyak, in this popular-audience book on the Japanese attitude towards robots, investigates the reasons for Japanese robot affinity in that culture's rhetoric of human origins and destiny—and its difference from cultures of the West in this regard.

His study, however, is far more shallow. This book is an anecdotal history that's quite readable but not ambitious about developing the explanatory power of its anecdotes. The insights Hornyak propounds help us to know the factual history of robotics in Japan but do little to get at the differing notions of what constitutes human essence that would seem to underlie the East-West distinction he proposes. You're left at the end of the book wondering if there's any real difference at all between American and Japanese ideas of robots.

The books are only adjacent, not connected, but there are resonances that travel between the ideas of a system of language that drives real-word constructions and a real-world construction that is created by rhetorics of being human as well as cyber-languages. The real opportunity in reading these books is the chance to see how thorough knowledge of the history of forms differs from a superficial knowledge of a historical event in its interpretive power.